Over break, all’s quiet on the East Bank

Students who stay for Thanksgiving see a different side of campus. 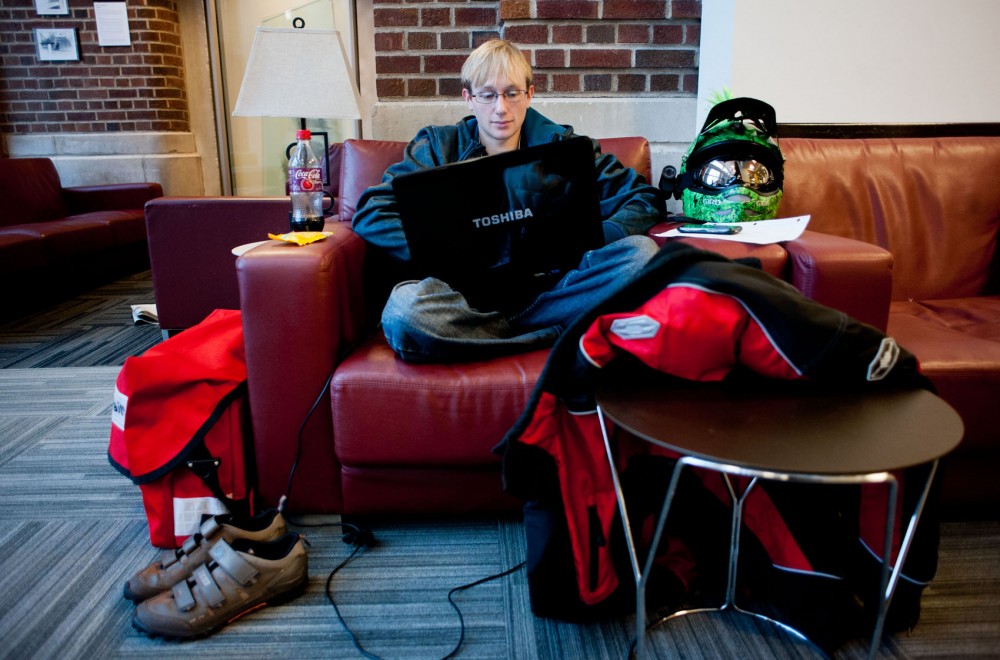 On Friday, the University of Minnesota campus was silent.

Locked buildings full of empty classrooms were dark, and passersby were few and far between, bundled and walking quickly to escape the cold.

Only a few people were scattered around Coffman Union, where an empty armchair is usually impossible to find.

“I wish there were more people here,” said Cody Johnson, who spent the day studying at Coffman. “I don’t like it too quiet.”

Johnson, an interior design freshman, was among the small group of University students that spent the weekend on campus. With finals approaching, some decided to forego a trip home to fit in more
studying. Others stayed because of the cost of traveling home or to work at a campus job.

While some University buildings were open Friday, many — including Wilson and Walter libraries — were closed Thursday and Friday.

Connie Alvarez, a family social science sophomore, spent the day gift-wrapping in the University of Minnesota Bookstore. She has two other jobs on campus where she said she’d be working over the weekend.

Alvarez spent the Thanksgiving holiday with a friend’s family instead of going home to see her parents in Cuernavaca, Mexico. She said she did the same thing last year and likes getting to spend the day with her friend’s big family.

“I miss my parents, but I don’t have the money to go home,” she said. She said she might travel to Mexico during winter break.

In fall 2012, about a quarter of students on the University’s Twin Cities campus were from a state other than Minnesota and nearly 12 percent were international students, according to the University’s Office of Institutional Research.

“This year, I told my mom, ‘I’m really not coming home this year. Really.’”

Funk, who lives in the Southeast Como neighborhood, said she celebrated Thanksgiving with family friends and will travel home in mid-December.

She spent Friday studying for final exams at Espresso Royale in Dinkytown.

The coffee shop, a popular study spot, was nearly empty.

“It feels a little isolated now,” Funk said of the usually bustling neighborhood.

Many Dinkytown businesses were open Friday through Sunday.

“Half the people leave campus to go home, but the half who are still on campus have nothing to do, so they tend to go out and eat and drink and shop,” he said.

Johnson said he enjoyed having the day off to bike and spend time at home. He said his father, who is doing construction work in Oklahoma, worked over the holiday. The rest of his family, who live in Brainerd, Minn., “did their own thing,” Johnson said.

Because his family wasn’t at home — and because of the cost of driving to Brainerd — Johnson said he wanted to stay on campus and work on final projects.

“I come here because usually there’s someone playing the piano,” he said, looking around at the mostly empty chairs. “I wish there were people playing piano today.”