Mathieu steps up at team scrimmage

The Gophers gave fans a glimpse of their new, up-tempo offense on Friday. 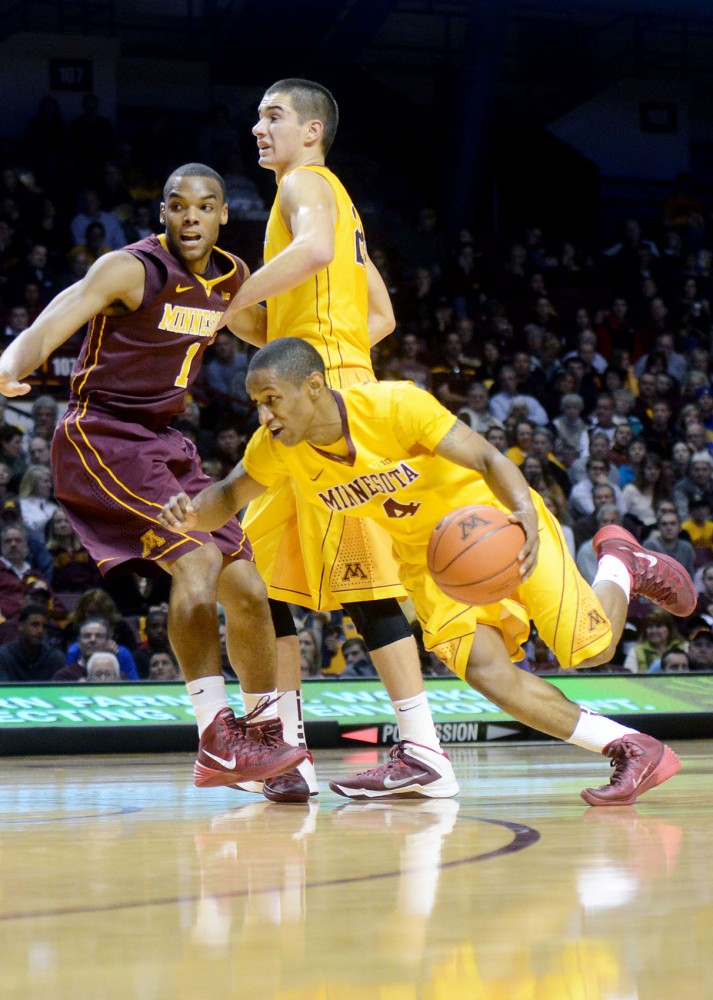 Minnesota guard Deandre Mathieu drives toward the basket at a team scrimmage at Williams Arena on Friday. Mathieu led all scorers with 26 points.

Gophers head coach Richard Pitino has emphasized an up-and-down, fast tempo since the moment he was hired in April.

Minnesota showed a glimpse of that pace Friday night in an intrasquad scrimmage as the Maroon squad defeated the Gold squad 61-53.

The Gophers pressed after nearly every made basket and looked to take quality shots early in offensive sets.

Minnesota forced a combined 35 turnovers between the two teams.

It was a style Gophers fans had to adjust their eyes to after witnessing the slow-paced, hold-the-ball offense Minnesota often executed throughout the last six seasons under former head coach Tubby Smith.

And even the in-game coaching was visibly different.

Smith was known for his stoic sideline mannerisms as he perched on a stool for entire games. Pitino had a stool Friday night but only used it in 10-second intervals as breaks from scrambling up and down the court to give each player instruction and feedback.

“Coach [Pitino] wanted us to establish our brand of basketball, show the fans how we’re going to play,” junior guard Deandre Mathieu said. “Let them see for themselves how Gophers basketball is going to be played this year. It’s probably a little bit different than last year.”

Mathieu, a transfer from Central Arizona College, excelled in Minnesota’s up-tempo offense. He finished with 26 points on 8-for-11 shooting for the Gold squad. He drove to the bucket at will and looked virtually flawless in the transition game.

Hollins guarded Mathieu for most of the game and wasn’t shy afterward about his showing on defense.

“I’m kind of shooting myself in the head with that one because I was guarding him,” Hollins said. “We’re excited to have [Mathieu] as a part of the team.”

Still, Minnesota’s aggressive, opportunistic defensive showing had a downside — it was their own teammates the Gophers were turning over. The squads combined for just 20 assists to go along with the 35 giveaways.

Other Maroon team standouts Friday included senior guard Austin Hollins and redshirt junior forward Oto Osenieks. Hollins finished the game with 21 points on 8-for-10 shooting, including 4-for-6 from beyond the arc. Osenieks added 16 points on 7-for-11 shooting.

“I was very impressed with [Osenieks],” Pitino said. “[He had] a very efficient night offensively, and I thought he did a good job defensively.”

Senior guard Malik Smith, a transfer who came with Pitino from Florida International, had a rough night. Smith, a sharpshooter by trade, finished the night 1-for-10 from beyond the arc and added eight turnovers.

“Malik Smith will do that to you — only [I] can accept that,” he said. “I have unbelievable faith in him when it comes time to hit the big shot.”

Pitino said Friday his team picked up the intensity in its second fall scrimmage, but he said it’ll need to continue to take steps forward with the first game in less than three weeks.

“They want to play with the best,” he said. “I think they took strides with that today.”