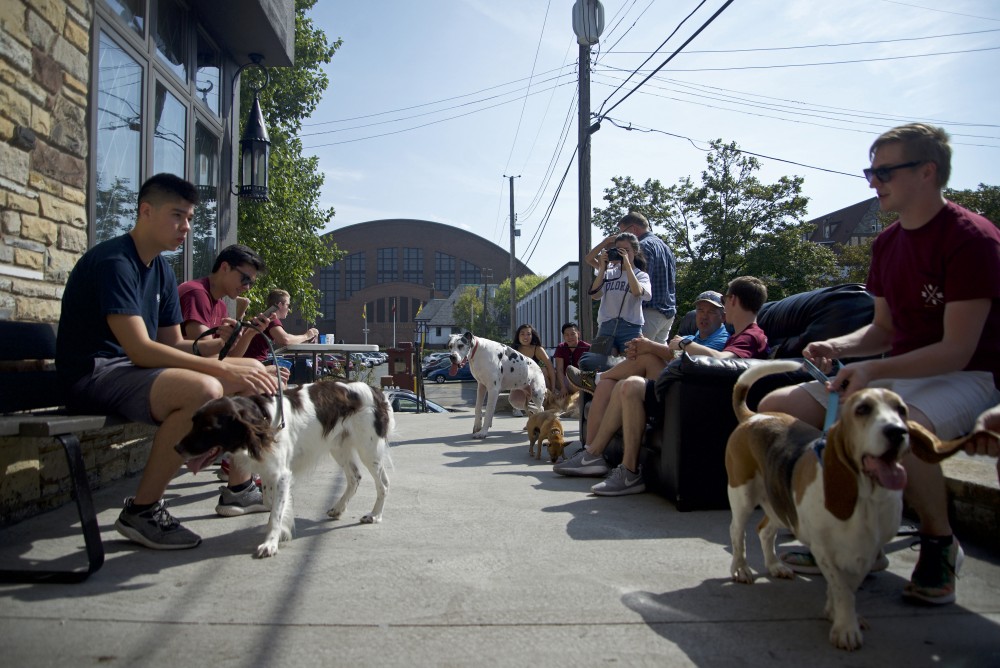 Dogs roam around Phi Sigma Kappa as they hold there second annual fundraising event for the Special Olympics on Sunday, Sept. 24.

Students in Greek life may feel a stronger connection to the University than their nonGreek counterparts, according to survey data.

According to the Student Experience in the Research University survey — a nationwide survey emailed to undergrads at schools across the country — students involved in fraternities and sororities feel a greater sense of belonging than non-Greek students on average.

Jacob Bauerle, a junior in economics and the president of his fraternity, Theta Chi, said he agrees with the notion that Greek students feel more connected.

Bauerle, who joined the organization during his first semester on campus, said the fraternity provides a support system he hasn’t found elsewhere.

“I meet way more people through my fraternity and just going to those events, so I definitely agree with that statement,” he said.

James Ehrmann, the director of the Office of Fraternity and Sorority Life on campus, said students involved in Greek life tend to get involved with the organizations earlier on in their college careers than other student organizations, which fosters a greater sense of community.

He added that fraternities and sororities are usually made up of a diverse group of people from different backgrounds, majors and years in school.

“You’re really joining a diverse group of 30 to … 160 other people,” Ehrmann said. “That diversity of the individuals comprising the organization adds more value.”

Michael Wessels, a junior in finance and accounting, said that specifically in his fraternity, Sigma Pi, the men aim for an altruistic campus experience. He said the organization has also pushed him to become involved in other ways on campus.

“We try to give back to campus,” Wessels said. “I know that definitely helped me feel connected to the campus in a way that I wouldn’t have … if I wasn’t in Greek life.”

Accounting and finance senior Tomi Olateju, the president of Zeta Phi Beta, agreed, adding that her experience helped her connect with other like-minded people and embrace her leadership skills.

But not all students agree the community fostered by the Greek organizations is necessary or beneficial.

Computer science sophomore Vaishali Kushwaha, who isn’t involved with Greek life, said she doesn’t feel a particular sense of belonging on campus, but she doesn’t necessarily attribute that to not being in a sorority.

Kushwaha said she thinks Greek students feel this way because they have mandatory events associated with the University.

“They’re there by choice, but with their choice they have to commit a lot of time towards it,” she said, adding that she believes there are other ways to feel a part of the campus community.

“There are good senses of community, like cultural traditions and a shared language, a shared sense of views that really do bind people together,” Mansdoerfer said, adding that he feels Greek life promotes unhealthy lifestyles or practices — specifically citing alcohol poisoning and hazing.

Still, Olateju said the process of getting to know her sorority helped her connect with other women who empowered her.

“I know that if I need help with something, they’re there and they have some type of advice for me,” she said. “That’s where this type of community comes from.”