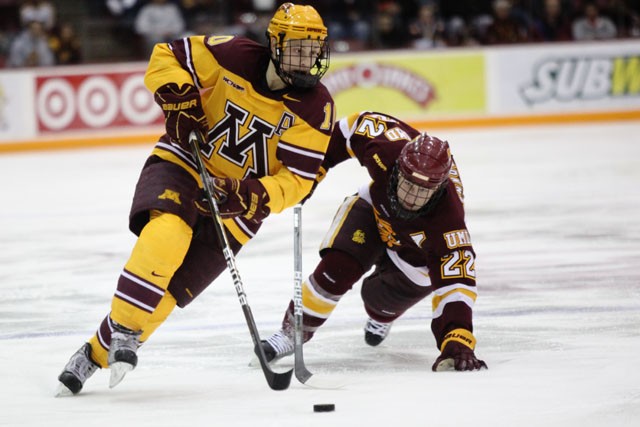 Entering the weekend, there didnâÄôt seem to be much question. Minnesota Duluth was 12-2-2, tops in the WCHA, No. 2 in the land. The Gophers were barely above .500 overall, below it in the WCHA and still licking the open wounds of being swept by a different in-state team.

Flash forward two games and a foot and a half of snow, and things arenâÄôt quite so clear. The Gophers won 3-2 Friday night then tied UMD 2-2 in SundayâÄôs weather-delayed game to take three points and knock the Bulldogs from the top of the conference standings.

Having lost three of four to St. Cloud State and Minnesota State, the Gophers are still just 2-3-1 this season against in-state teams. It takes more than one weekend to gain supremacy, just like the Bulldogs have hardly lost it despite a disappointing series. The debate will continue, and actually matters, because best in Minnesota is so often synonymous with best in the country.

Such debates unfold as a series of snapshots of increasing granularity. That the Gophers took three points from the Bulldogs is important, but makes for an incomplete picture because it leaves out Kent Patterson and Aaron Crandall and UMDâÄôs first line and MinnesotaâÄôs fourth and one of the prettiest touch passes youâÄôll see anywhere.

Cut first to the final minute of FridayâÄôs game. Down by a goal, the BulldogsâÄô net has been empty since the clock showed 1:28. The puck pops out to PattersonâÄôs right and right onto the stick of Justin Fontaine. The junior goaltender leaps full stretch across the goal as Fontaine snaps a shot, somehow making the save. The crowd erupts, then stands in ovation as the final seconds tick down to a Minnesota win.

âÄúI knew they were just going to try to get the puck on the net,âÄù Patterson said a few minutes later. âÄúThe puck got loose and went on FontaineâÄôs stick; I had to get over there so I just threw everything I had.âÄù

It was the most acrobatic, but not the last important stop Patterson would make. His 37 saves Friday night and 41 Sunday boosted his save percentage in WCHA games to .931, best in the conference.

That said, a big reason the Bulldogs got one point was PattersonâÄôs counterpart Aaron Crandall, who nearly went save-for-save with Patterson Sunday afternoon. Crandall and UMD staved off a 1:44 5-on-3 power play in the middle of the third period, and minutes later, Patterson and the Gophers killed a five-minute major that freshman Max Gardiner received for checking from behind.

Has the better team become unclear yet? If not, hereâÄôs more.

The Bulldogs have three of the best forwards in college hockey, not just on the same team but the same line. And that line spurred them, as usual. Jack Connolly had two goals, Justin Fontaine two assists, Mike Connolly (no relation to Jack) an assist too. To counter that production, the Gophers had … their fourth line?

Junior Nick Larson and Nico Sacchetti scored MinnesotaâÄôs first two goals Friday night, before Jay Barriball scored the first lineâÄôs only point of the weekend on a shot that pinballed from goalieâÄôs pad to skaterâÄôs shin to a BulldogsâÄô skate and in.

âÄúIt was a great game-winner,âÄù Sacchetti joked after the game.

Actually, it stood in stark contrast to MinnesotaâÄôs last goal on Sunday. Freshman Nate Condon made a no-look touch pass to Jacob Cepis as he cut toward the goal, the junior winger flipped it onto his backhand and slid the puck five-hole on Crandall. There was a bit of a riff after the game, however, as to who made the better play.

âÄúIt was a better pass than a goal,âÄù Cepis said. âÄúIt was a gift to me.âÄù Condon disagreed. âÄúObviously the goal was [better]. I really didnâÄôt do that much work, I just kind of deflected it down there and he was in the right spot.âÄù

n there and he was in the right spot.âÄù