Class of 2014 alum Joe Zerka began his career right after graduation — by driving the Oscar Mayer Wienermobile across the country. 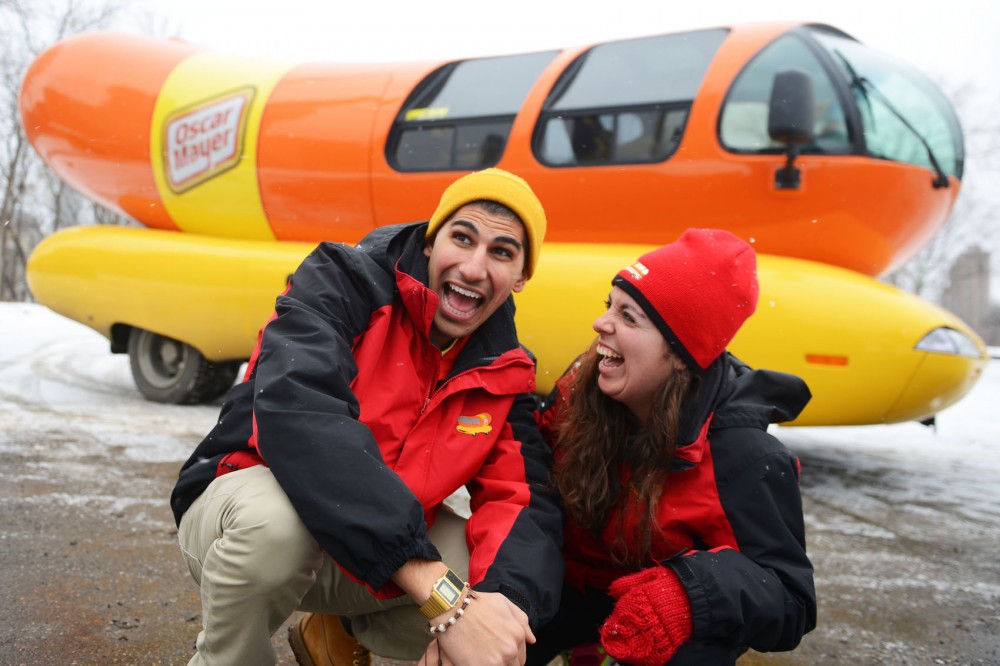 "Hotdoggers" Joe Zerka and Alexandra Longo pose outside of their Weinermobile in Minneapolis on Monday afternoon.

Parked outside grocery stores around Minneapolis this week, a University of Minnesota graduate will haul a prize item: a 27-foot-long hotdog.

After graduating with a degree in business marketing education last May, University alumnus Joe Zerka hit the road working for Kraft Foods as a driver of the famed Oscar Mayer Wienermobile.

“We’re showing the people we’re Oscar Mayer. We are the Wienermobile, we’re here to make your day,” Zerka said.

Zerka was one of 12 college graduates plucked from over 1,200 applicants across the country that Kraft hired to drive the Wienermobile. Since June, he’s toured the U.S. with his official job title: Hotdogger.

“We make magic and sell meat,” Zerka said of his time with Oscar Mayer. “No one’s ever upset to see the Wienermobile.”

As a Hotdogger, Zerka waves and honks to scores of people on the road each day, along with the dozens more he greets at community engagement events.

At malls, grocery stores and parades, Zerka gives curious folks a tour of the meat machine and doles out trinkets called “Wiener Whistles.”

“Saying, ‘I don’t have a Wiener Whistle’ is something you never say to anybody,” Zerka said.

The incredible list of eccentricities surrounding life as a Hotdogger is endless: Zerka and the 12 other Wienermobile drivers attended training at a place called ‘Hot Dog High,’ at Oscar Mayer’s headquarters in Madison, Wis.

Zerka stumbled upon his post-college career after interning with Nabisco, where he met a former Hotdogger who led him to this opportunity.

“In college, they teach you it’s not what you know, it’s who you know,” Zerka said. “I happened to sit down next to one of the people I needed to [in order] to drive the Wienermobile.”

Kerr sat behind the Wienermobile wheel after she graduated from the University of Minnesota in 2009 with a degree in strategic communication.

Her degree provided the public relations skills needed to meet thousands of people in the giant hotdog.

“As an Oscar Mayer Hotdogger, you’re the face of the company,” Kerr said. “You’ve got to be on all the time.”

Constant enthusiasm is vital when driving the Wienermobile, Zerka said. Part of the car’s charm is its unsubtle, hotdog-ified terms, where a sunroof becomes a “bun-roof.”

“When we’re hauling buns down the hotdog highway, we wear our meatbelts, not our seatbelts,” Zerka said. “I don’t think the word[s] ‘nonchalant’ and ‘Wienermobile’ belong in one sentence.”

While Oscar Mayer finished accepting Hotdogger applications for this year, the job opens to 12 new college grads every spring.

For Zerka, the surreal aspect of driving the Wienermobile never wore off, a feeling he’s looking forward to sharing with family and friends in the Twin Cities.

“Our only mode of transportation is a 27-foot-long hot dog,” Zerka said. “When we come to Minnesota, I’m parking it in my family’s driveway.”

Outside of the Wienermobile revelries, including a ketchup-and-mustard-patterned carpet and a license plate reading ‘BIG BUN,’ the Hotdogger lifestyle has its tolls: Zerka and his co-workers drive across the entire country all year, rarely seeing loved ones throughout.

For Zerka, whose hot-dogging days are ending in May, the downsides to driving the Wienermobile are easy to keep in perspective.

What: The Wienermobile in Minneapolis

When: Tuesday through Sunday