More than 8,400 students registered during the 2016 election. 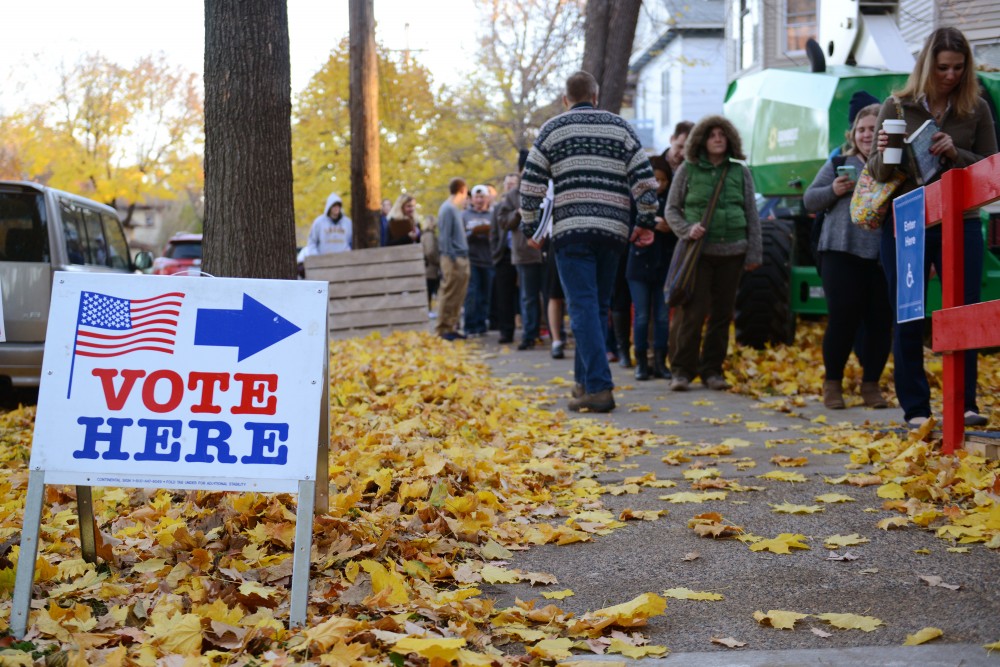 Voters line up outside of First Congressional Church in the Marcy Holmes neighborhood on Nov. 8, 2016. Polls opened at 7 a.m. and hundreds of voters came out early to cast their votes.

With early-voting for the 2017 Minneapolis city elections in full swing, University of Minnesota student groups are pushing for new students to register.

Early-absentee voting began Sept. 22, allowing voters to cast ballots ahead of the election-day rush. The Minnesota Student Association has led the effort to get students to vote in the Minneapolis mayoral, city council and park board races on Nov. 7.

“We’re encouraging students to go register online, register on-campus. … We are going to be looking to have a lot more ways, especially for our first-year students, … because a lot of them haven’t voted before,” said Max Hurst, MSA’s director of government and legislative affairs.

Hurst said they have linked their website with the State of Minnesota voter information portal, but hopes to expand it with their own webpage to include notable election deadlines, registration instructions and other links for community involvement.

The University joined the VoteB1G campaign in 2016. Along with ten other Big Ten schools, the organized effort surpassed the goal of 30,000 new-registrants, registering 50,986 new voters.

University student groups registered 8,417 new voters in the campaign, finishing second in the Big Ten only to Penn State University, who registered 16,626 people, according to VoteB1G.com.

“We are a large part of the population here, and back in our hometowns. Whether it be public safety and policing, or transportation and public transit, these are the issues that students need to know about, and need to have their voice heard,” Hurst said.

The University does not register students directly.

“We support the students getting engaged and voting, and our office has been helpful and encouraging to all students to help them vote locally,” Burton said.

Election day is Tuesday, Nov. 7, and is open to all voters with more than 20 days of residency.

Voters can cast early-absentee ballots for the Nov. 7 election at the early-election center located at 217 3rd Street South, near City Hall. The election-center is open Monday through Friday from 8 a.m. to 4:30 p.m., with extended hours, including weekends, in the final days before election day.