The women’s team also competed at Stanford and Hamline universities. 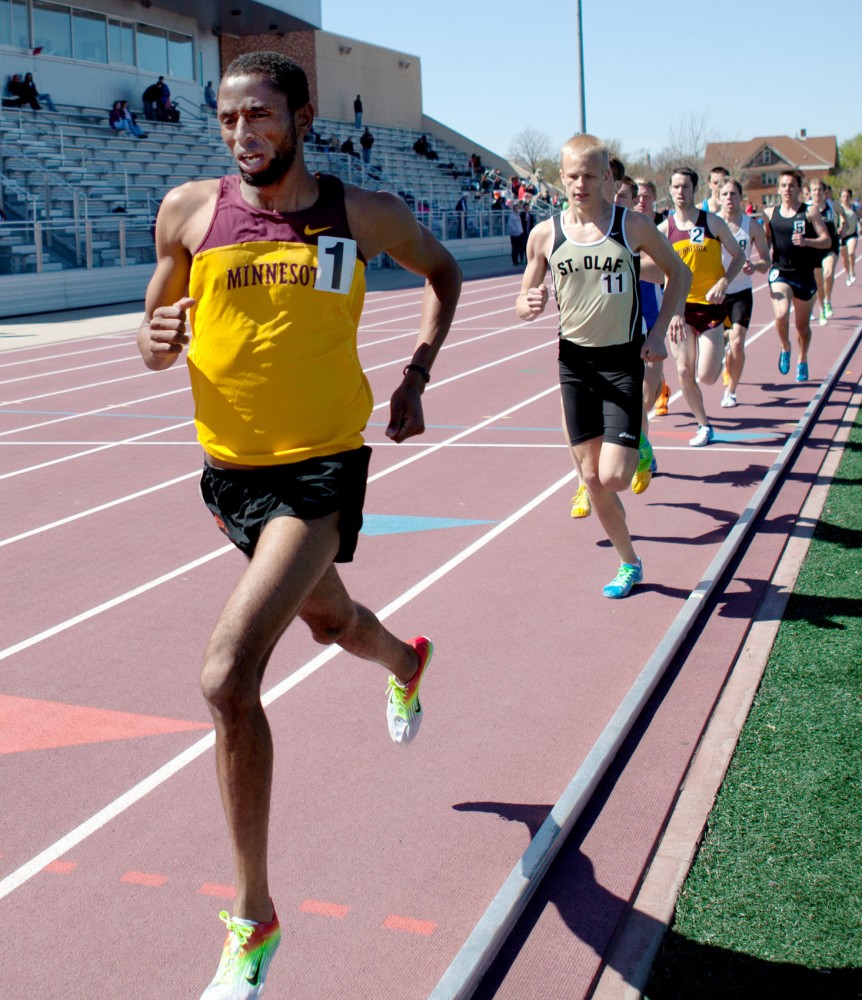 Three-time All-American Hassan Mead bursts ahead of the competition and never gives up his lead in the men’s 1500-meter race Friday at Hamline University.

This weekend marked the first outdoor meet for the members of the Minnesota men’s track and field team that competed at the NCAA indoor championships March 9-10.

No team scores were kept at the Stanford Invitational in Palo Alto, Calif. or the Hamline Invite in St. Paul, Minn., but several individuals recorded solid early season marks.

Hassan Mead placed first in the 1,500-meter run at the Hamline Invitational with a time of 3:52.47. It was his first competitive meet since finishing seventh in the 5,000 at the NCAA indoor championships in March.

“It was just to get the idea of racing again going on before we do an actual 10K,” Mead said. “Whenever I get a chance to do these kind of events is fun, running with my younger teammates and all.”

All three of the 800-meter runners from the NCAA indoor meet competed in the event at Stanford.

“They kind of got back into it a little bit, so kind of shaking a little rust off in their first races after the indoor season, and I thought they did pretty well,” head coach Steve Plasencia said. “They stepped into some pretty good competition, definitely a lot of major D I powers.”

Three other athletes won their events at the Hamline Invitational. Oladipo Fagbemi won the 200 in 22.32. Jack Szmanda won pole vault with a height of 5.1 meters. Dominique Howard championed the discus with a 53.3-meter throw.

The men’s next meets are April 13-14 at the St. Thomas Twilight in St. Paul, Minn., and the University of Wisconsin-River Falls Falcon Invitational in River Falls, Wis.

The women’s team sent select distance runners to Stanford while the majority of the team competed at Hamline.

The Stanford Invitational, traditionally a destination for competitive distance runners, lived up to expectations.

“This is a field very, very similar to the one they are going to see both at the Big Ten meet… [and] the first round of the NCAA in the West region,” assistant coach Sarah Hesser said. “To get in the field … and know that they’re not just trying to hang on and not get last, they’re really competitive … it really does give them some confidence.”

Laura Docherty placed 12th in her section of the 10K and clocked a time of 34:07.40. Docherty’s time bested her previous personal record by more than 90 seconds.

“[Her time] is going to be one of the top times going into the Big Ten meet and every year … that will qualify her for the first round of the NCAA tournament,” Hesser said.

Katie Moraczewski finished 11th in her section of the 3,000-meter steeplechase with a time of  10:18.60. She also beat her personal record by 15 seconds.

“Any time you can be under 10:20 in the steeple, you’re really putting yourself in a conversation of very, very elite steeplers in the country,” Hesser said.

In the field, Tina DeLakis championed shot put with a distance of 14.3 meters, Rachel Melum took home both javelin (40.34 meters) and high jump (1.6 meters) titles. Katie Murgic won the pole vault with a height of 3.7 meters.

The women will compete April 12-14 at the University of Georgia in Athens, Ga.