The men’s team will face Big Ten foes Purdue and Indiana this weekend. 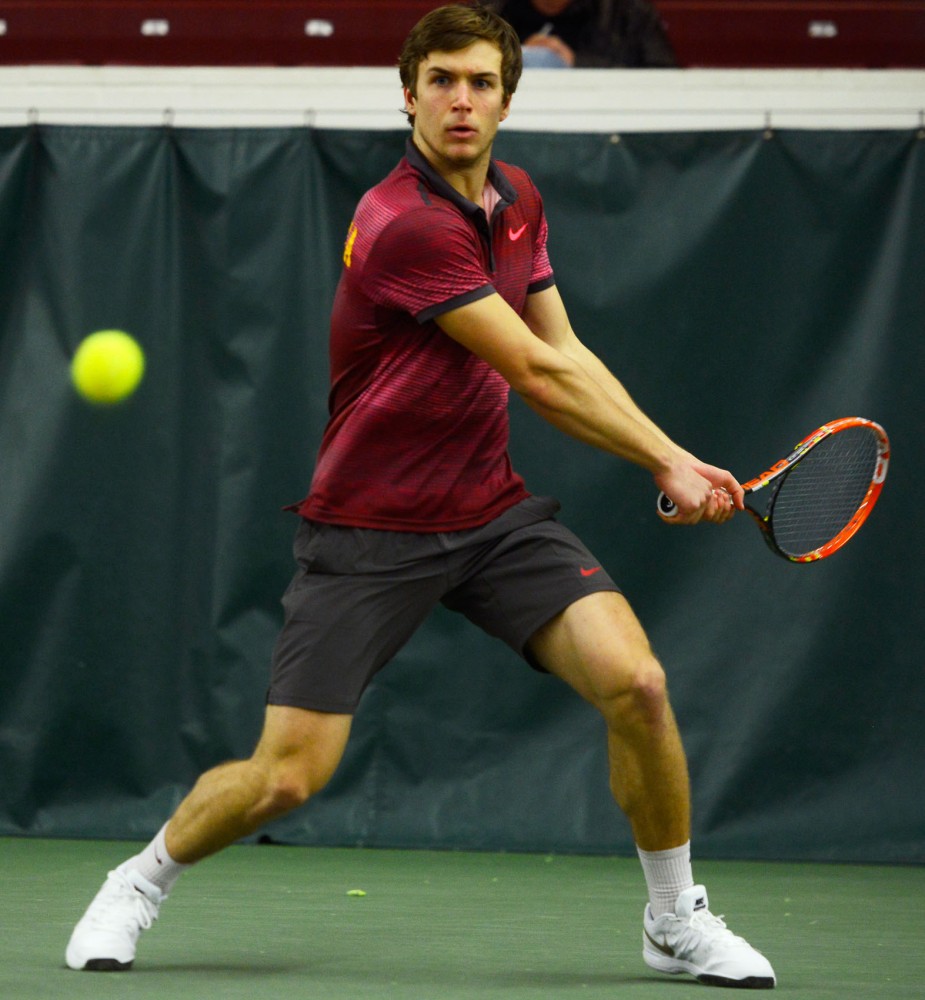 Freshman Matic Spec volleys the ball at the Baseline Tennis Center on March 6 against Washington.

The Gophers haven’t lost a single meet at home this season, jumping out to an 8-0 start at the Baseline Tennis Center.

They’ll attempt to continue that streak starting Friday when they host No. 39 Indiana and Purdue this weekend.

“For some reason, we just play better at home,” head coach Geoff Young said. “I think it will be an advantage for this weekend.”

Freshman Matic Spec said his team plays well at home because of is its familiarity with the court.

“It’s the courts that we are used to and ones that we train on and practice on,” Spec said. “And also on match days, there are a lot of people that come watch us. It definitely helps when you have a home crowd that cheers for you and pumps you up.”

Individually, Spec has won all of his matches at home in singles competitions.

He is also 5-0 overall for competitions in the month of March, and he said he has felt good on the courts lately.

“I had a really good start to the season, but then I lost two matches [on the road],” Spec said. “It was after that when I started to not concentrate on the points anymore and focus on winning. It has proven to be successful so far.”

Like Spec, senior Mathieu Froment is also seeing success on the court. Froment lost three consecutive matches in February but has since rebounded.

At No. 1 doubles with senior Jack Hamburg, the duo is 4-2 in its last six competitions.

“[Jack and I] were kind of in a losing slump,” Froment said. “But I am glad that we are back on track again. For the weekend, hopefully we can keep doing the right thing against Purdue and Indiana.”

Not only are the Gophers undefeated at home, but the team is also undefeated in Big Ten play.

Last year, Minnesota started 2-2 in the Big Ten with one of those losses coming against Purdue.

The Gophers didn’t stand a chance against the Boilermakers, losing 6-1.

“Last year, Purdue had a really good team,” Froment said. “But I think this year they lost some pretty good seniors, so we should win that match.”

The Gophers split matches with Indiana last year — winning in the regular season and losing in the Big Ten tournament — with both matches ending in 4-3.

“It will be a close match again with Indiana for sure,” Froment said. “We are definitely looking to get that win back.”

Young said both matches will most likely be played outside, which will be a change of pace.

“I think it’s going to be windy outside, and the weather will be a little bit colder,” Young said. “It will make the matches very interesting, and it will come down to which team can better handle the conditions.”