Food security is one of several global issues the U wants to tackle. 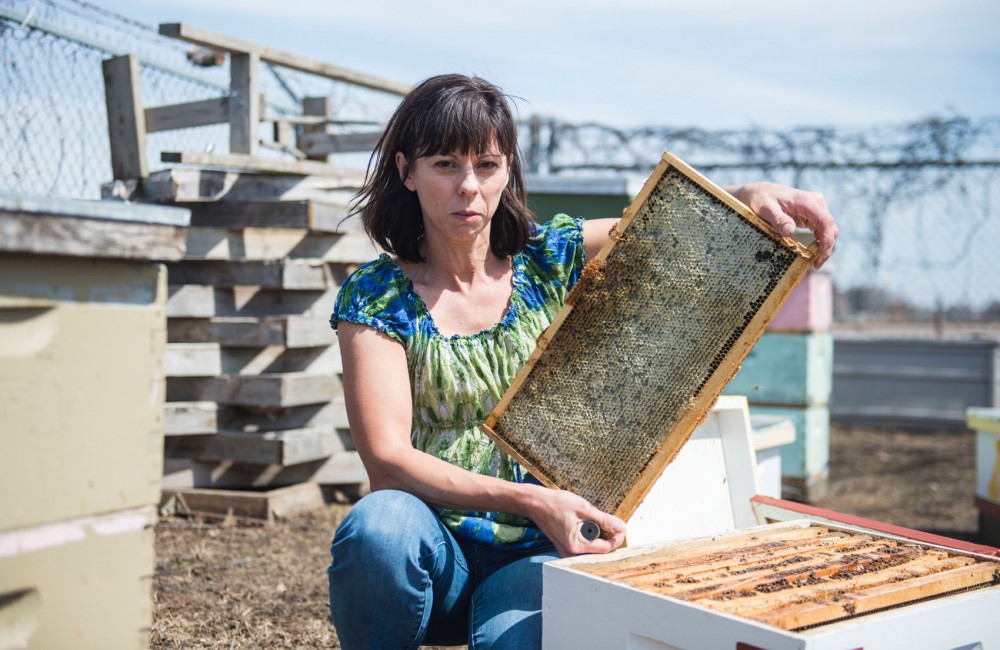 Bee Squad Coordinator Becky Masterman shows a frame from a hive that is used to keep bees and collect honey that bees make, in St. Paul on Wednesday afternoon. The Bee Lab on the St. Paul campus conducts important research about bees and does community outreach to improve the bee population and food security.

Working out of a rundown building in the corner of the University of Minnesota’s St. Paul campus, graduate researchers are attempting to solve issues far bigger than the facility housing their research.

The Bee Lab researches bee populations, whose recent diminishment could pose a major threat to the world’s food systems.

The work is part of the University’s big-picture idea of securing resources beyond campus through outreach and research. Now, school officials want college departments to boost their efforts in these fields, and many agree the time is right.

“Food security is of the utmost importance to the world’s population, both now and in the future,” said Board of Regents Chair Richard Beeson. “The U is at the forefront of this work and brings a broad set of expertise to solve this pressing problem.”

“We’re constantly evaluating how to conserve natural resources and generate the best versions of crops to resist diseases,” he said.

Buhr said food security is “central to everything we do as a college.”

Members of the Bee Squad, a division in the Bee Lab that focuses on education, connect with community members who keep bees to make sure they’re fostering hives properly, in an effort to improve the local bee population.

Bee Squad coordinator Becky Masterman said bees are a crucial factor in the balance of the ecosystem. They pollinate an estimated one-third of the U.S. food supply, according to a report by the U.S. Department of Agriculture.

Bee populations shrank significantly in recent years, she said, which is an alarming problem.

In its 2014 capital request, the University is asking for state bonding dollars to upgrade the Bee Lab.

Even if the request is granted and the upgrades are made, Buhr said, it will take collaboration at the departmental and University-wide levels to tackle a challenge like food security.

The center, along with the Bee Lab, attempts to solve these types of problems by engaging people beyond the five-campus system, Buhr said, and the implications reach people around the world.

“[The University is] positioned in one of the most resource-rich and diverse landscapes on the planet,” Buhr said in a presentation at last month’s regents meeting.