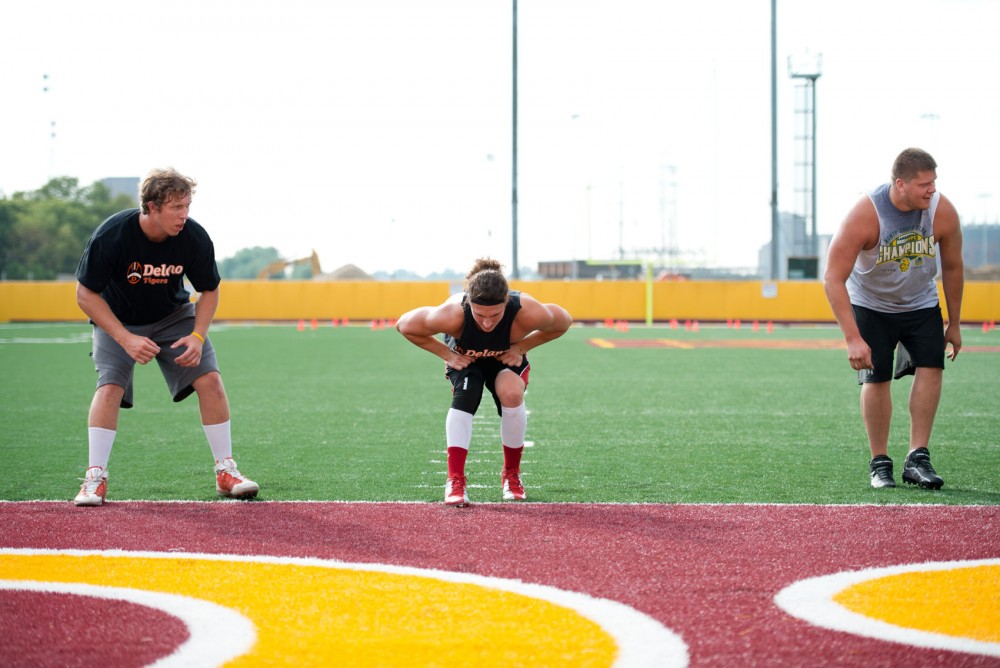 Several football players exploded off the goal line, reached to touch the 5-yard line and sprinted back to where they started.

Repeating the process to the 10-yard line, then the 15, the majority of them finished the drill in fewer than 15 seconds.

“I don’t know how they do it,” Mark Shelley said.

Shelley, a Richfield, Minn., police officer, sat alongside the outdoor football field at the Bierman Field Athletic Building on Friday as he watched his son, Garrett, participate in one of the final workouts of All-Pro NFL receiver Larry Fitzgerald Jr.’s summer camp.

Fitzgerald Jr.’s camp brings some of the biggest names in the game. Dallas Cowboys Hall of Fame receiver Michael Irvin and Minnesota Vikings all-time leading receiver Cris Carter have been coaching at the camp for the past few years.

The camp is modeled after Cris Carter’s FAST program, which was co-founded by Fitzgerald Jr.’s trainer and has been held on the University of Minnesota campus for four years.

While focused on conditioning, drills aim to build strength and endurance in all positions on the football field, from receiver to lineman.

Garrett Shelley, 18, completed his fourth week of the camp Friday.

“It’s invaluable learning from some of these guys,” he said. “You’ve got guys here playing [Division I] football and guys from the NFL.”

However, as more current NFL players need to report for their training camps in late July, Fitzgerald Jr.’s camp is missing its star power.

One trainer Friday led about 25 athletes — one of the smallest turnouts this year, according to Mark Shelley, who has come to nearly every practice to watch his son.

“Yeah, all those guys are gone,” he said about the big-name former and current NFL players. “Not even Larry [Fitzgerald Jr.] is here. But, this is honestly better for Garrett — he got to learn from them and now is getting more of a work in with them gone.”

With a smaller group, the few college and professional athletes get less time to rest between workouts. In turn, they’re often shorter but more intense, Mark Shelley said.

“It’s tough. But I’ve been able to tell that [our conditioning drills] have gotten a lot easier every Monday,” Garrett Shelley said. “I wouldn’t be where I’m at physically without this camp.”

Garrett Shelley, a native of Delano, Minn., wanted to play for the Gophers, or at least D-I football, but he’ll be a freshman at Minnesota State University, Moorhead next fall.

“It’s a chance for me to start right away, get playing time,” Shelley said. “I’m happy where I’m at, but I’ll always be looking to transfer to play D-I somewhere.”

While Shelley works to make the jump to the D-I level, former Gophers players like Xzavian Brandon come to the camp in the hopes of one day making it in the NFL.

“Man, working out with guys like Fitz, Irvin, nothing beats it,” Brandon said. “The experience, the knowledge they pass down, I couldn’t get this working out by myself.”

Brandon graduated from Minnesota last year but is transferring to New Mexico State University to pursue his master’s degree and to try to work his way up to the NFL.

“That’s the goal,” he said. “I’ve had a lot of issues with injuries holding me back, but I just need to get my shot, and I’ll make the most of it.”