The Gophers got 20 shots in the third period Saturday, but no goals came of it. 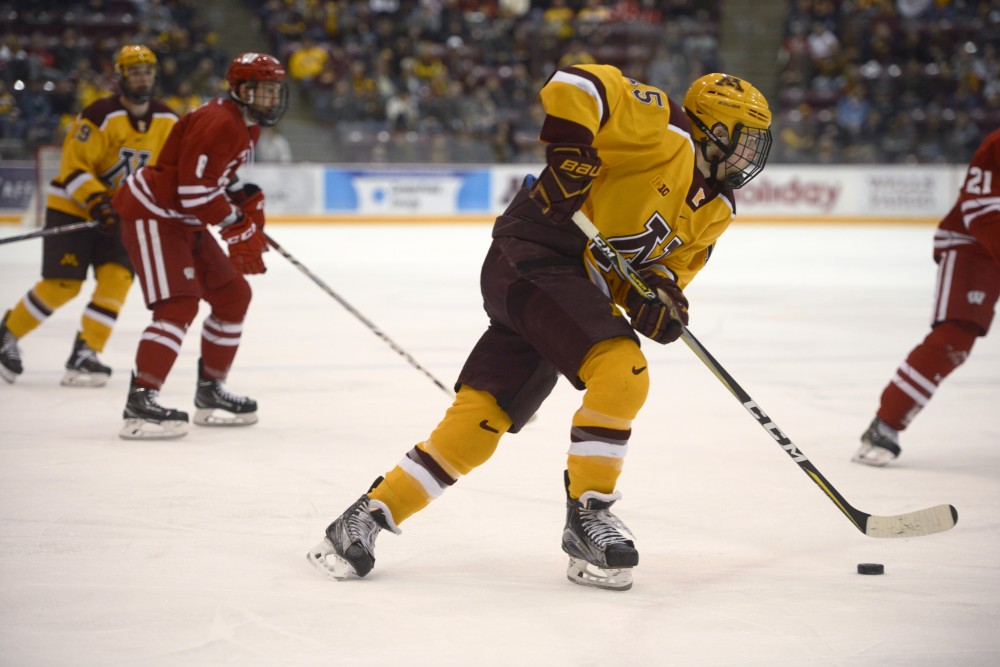 Sophomore forward Rem Pitlick skates with the puck on Saturday, Dec. 2 at 3M Arena at Mariucci. The Badgers beat the Gophers 3-2 in the second game of the series, while Minnesota won 5-4 the previous night.

Minnesota took advantage of one goalie Friday, but failed to get the same result Saturday night.

No. 7 Minnesota scored four goals in the second period to secure a 5-4 win against rival No. 14 Wisconsin in the opening game of the border battle, but the Badgers fought back in the second game, taking it 3-2.

“We had an unbelievable push in the third period, but like a lot of times, we couldn’t buy a goal,” said head coach Don Lucia Saturday. “You look at how many shots we had right out front and we just couldn’t get one by him.”

The Gophers were down 2-1 heading into the locker room after the first period, and something changed on the ice in the second after going down to their rivals early.

“It’s a 60 minute game, we’ve [come from] behind before,” said forward Scott Reedy Friday. “We had to refocus, getting right back to the net front, like we practiced all week.”

The Gophers were up 5-3 after the second period of the first game, but Wisconsin did not give up.

Behind Reedy’s first multi-point game and his goal being Minnesota’s last in the game, the Badgers replaced their starting goaltender Kyle Hayton with Jack Berry and surged back offensively to within one goal. Berry did not allow the Gophers to score.

The Badgers eventually pulled their goalie, after the team failed to score on a power play in the last four minutes, but the Gophers defense held off the offense.

“Big penalty kill at the end [around] the last three or four minutes,” Lucia said Friday. “With the pulled goalie situation, I thought the guys did a good job.”

Minnesota had five different players score its five goals of the evening, and it all began with assistant captain Mike Szmatula reaching a personal milestone.

Szmatula scored the Gophers only two goals in the series against Notre Dame last weekend, and he started Friday’s game by notching another; it was his 100th collegiate point.

“It’s pretty special,” Szmatula said Friday. “I wanted to get [to 100 points], it’s just a tribute to all of my teammates that I’ve had my whole life really.”

Szmatula has been heating up on the scoresheet lately, with three goals in his last two games.

Captain Tyler Sheehy and leading scorer Rem Pitlick had a goal and the next leading scorer, forward Tommy Novak, had three assists on the night.

Minnesota picked apart Badgers goaltender, Hayton, on Friday, but Wisconsin put Berry in the starting lineup on Saturday, who came in and shut the door on the Gophers.

“We had an unbelievable push in the third period, but, like a lot of times, we couldn’t buy a goal,” Lucia said Saturday. “You look at how many shots we had right out front and we just couldn’t get one by him.”

Berry came in to start Saturday’s game and stopped 40 of Minnesota’s 42 shots, including 20 in the third period alone.

The Gophers had a power play in the last three minutes of the game and they ended up pulling goaltender Eric Schierhorn for even more offensive weapons, but couldn’t get a goal to tie the game at three.

Forward Casey Mittelstadt had a goal to break open the game and give Minnesota the lead in the first period, and he factored into many of the chances the offense had in the third period, without success.

“We were a little desperate to tie the game,” Mittelstadt said Saturday. “Going down the line, especially in the bigger games, we’re going to have to bury those and force overtime to get a win.”

Minnesota ends the weekend with a 10-7-1 overall record, and a 4-5-1-1 Big Ten record, good for third in the conference.