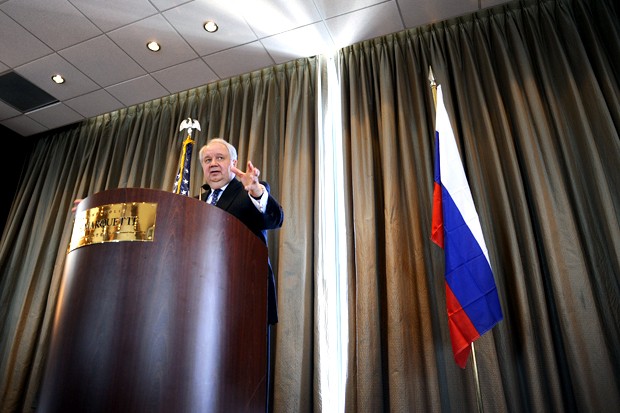 Russian Ambassador Sergey Kislyak gives a speech to the Minnesota International Center in the IDS Tower on Tuesday. Sergey discussed the current state of international trade between the United States and Russia.

Russian Ambassador to the United States Sergey Kislyak spoke Tuesday at a luncheon forum in Minneapolis, focusing on the future of U.S.-Russian relations. President of The Minnesota International Center Carol Engebretson Byrne said âÄúthis is truly a pivotal time for U.S.-Russian relations.âÄù Engebretson Byrne said trade between Russia and Minnesota is growing. Russia was MinnesotaâÄôs fastest growing export market in 2007, according to the Minnesota Trade Office, which focuses on the expansion of exports and foreign investments that contribute to the growth of the Minnesota economy. Kislyak said he is optimistic the Obama administration will bring change and strengthen the ties between the United States and Russia. âÄúYou have a new president with a fresh look,âÄù Kislyak said. In July 2008, Kislyak was appointed Ambassador to the United States by President Dmitriy Medvedev . As a member of the Russian Foreign Service since 1977, he has held several positions such as Russian Ambassador to Belgium and Permanent Representative of Russia to the North Atlantic Treaty Organization (NATO). Kislyak has served as RussiaâÄôs Deputy Minister of Foreign Affairs, and acted as the lead on arms control and nonproliferation issues. This was KislyakâÄôs first trip to Minnesota. On Monday night, Kislyak also presented the Order of Friendship to Bradford Shinkle IV of the Museum of Russian Art in Minneapolis, one of the most prestigious awards a foreign citizen can receive from the Russian government. Shinkle IV is one of the founding officials of the Museum of Russian Art , which organized in 2002. Kevin Swanson is a director of marketing for Minneapolis-based Bepex International LLC , which manufactures, processes and develops equipment for companies in the food, chemical and polymer industries. Swanson, a 1988 University of Minnesota alumnus with a degree in chemical engineering, has worked with Bepex for 22 years. He said Bepex does not do âÄúas much business as weâÄôd likeâÄù with Russia. Swanson attended the event to learn more about the Russian economy and U.S.-Russian relations. He said he is optimistic about the future of trade between the two countries. âÄúCountries are both trying to work towards the same goals,âÄù Swanson said. âÄúThey have friction here and there in some issues, but with the right people and the right attitudes, we can make it work.âÄù TuesdayâÄôs event was sponsored by The Minnesota International Center and co-sponsored by Medtronic.