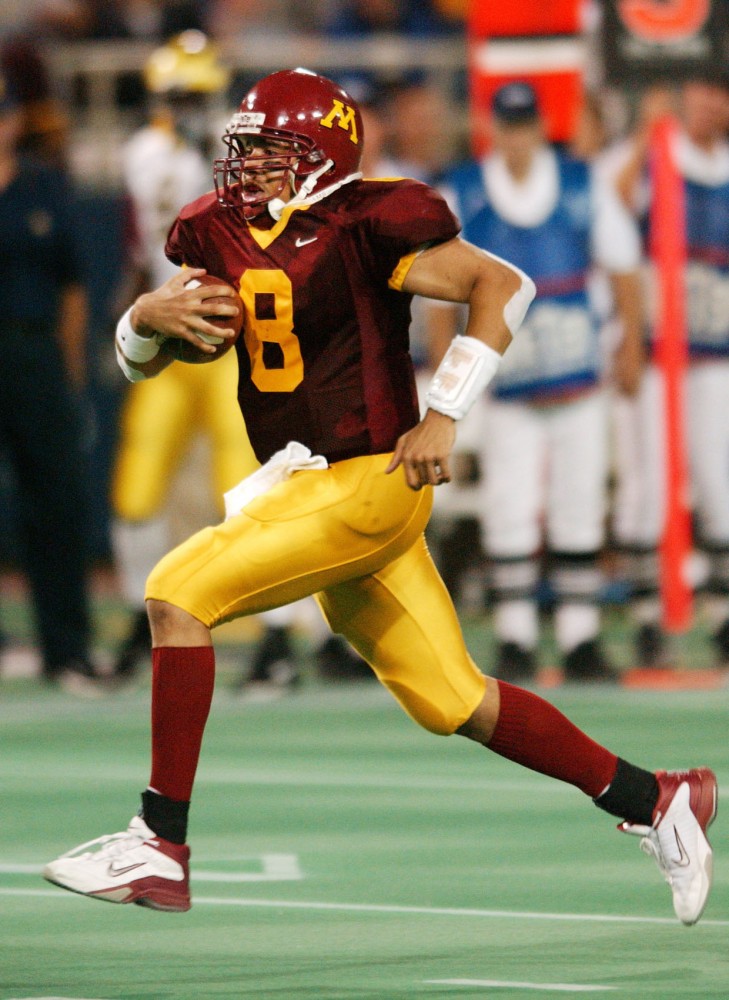 Minnesota quarterback Asad Abdul-Khaliq runs the ball against Michigan on Oct. 10, 2003, at the Metrodome. Abdul-Khaliq led the Gophers to a 10-3 record that year.

On one of the biggest days of his life, NFL scouts watched Abdul-Khaliq break his foot during the three-cone drill — an exercise he had practiced “millions of times” — and his dream of playing in the NFL ended before it materialized.

“I didn’t have an education goal coming into school. My goal was to make it to the NFL,” Abdul-Khaliq said in an April interview with the Minnesota Daily.

The injury traumatized Abdul-Khaliq, and he battled personal demons for years.

But it also inspired him to help others avoid a similar fate. Eight years after his personal tragedy, Abdul-Khaliq oversees a nonprofit organization that helps young athletes prepare for life after sports.

Abdul-Khaliq rewrote the record books in his tenure with the Gophers from 2000-03, and he said the St. Louis Rams, New York Jets and Jacksonville Jaguars were all interested in drafting him. He said the Rams even promised to select him at some point in the 2004 NFL Draft.

In the months leading up to the draft, Abdul-Khaliq trained for his pro day, a workout in front of NFL scouts.

“We’re on display for four or five years,” he said, “hoping for an opportunity to come to the [NFL scouting] combine and do well in front of the scouts.”

Abdul-Khaliq broke his foot early in the workout. Scouts didn’t have a chance to watch him throw, and they lost interest.

“People don’t understand what it is for a kid who has focused on the NFL all his life,” Abdul-Khaliq said. “When something like that doesn’t happen, it’s a traumatic experience.”

Abdul-Khaliq said he fell into a deep depression, which he “didn’t snap out of until about six years later.”

He worked for an armored car company so he didn’t have to talk to anybody. He spent his days wallowing in self-pity.

But in November 2004, he gave football another shot. Abdul-Khaliq signed with the Chicago Rush of the Arena Football League, hoping to pull himself out of the slump. But the AFL wasn’t for him.

“I never gave it a real chance because in my mind, this isn’t what I worked for,” he said. “I didn’t work hard at all [in the AFL].”

Abdul-Khaliq played four seasons in the AFL but eventually had to switch to defensive back and was out of the league by 2008.

After four years in the AFL, he moved back to New Jersey. The return home changed his life.

Abdul-Khaliq finally opened up to his family about the struggles he internalized for so many years and was pleasantly surprised to be welcomed with acceptance.

“When I got that support from my family,” he said, “it definitely started to open my eyes, and I was able to move on slowly but surely.”

Alan McLeod, one of Abdul-Khaliq’s best friends, said he drew inspiration from the way Abdul-Khaliq bounced back from personal defeat.

“Even when Asad is going through something, a lot of people probably won’t know it,” McLeod said.

In 2009, Abdul-Khaliq and McLeod co-founded the Student-Athletes With Children Foundation (SAWC), a nonprofit organization that helps “bring reality to young adolescents … that life after sports is longer,” Abdul-Khaliq said.

The foundation locates internships and provides parenting classes and legal assistance for young athletes who are also parents. Both Abdul-Khaliq and McLeod had children while in college.

“In college, trying to manage being a father and a student-athlete, it’s really difficult,” said McLeod, who played prep school football with Abdul-Khaliq before playing at Morehouse College. He added that the organization helps kids in similar situations.

Abdul-Khaliq said the SAWC is focusing on urban areas first. The SAWC visits high schools and lectures kids on the importance of education and safe sex.

“We go out to the high schools and let these kids know that it’s okay if you’re not having sex,” McLeod said.

The SAWC operates from Abdul-Khaliq’s native New Jersey, but he plans on expanding in the future.

Aside from his work with the SAWC, Abdul-Khaliq is a case manager for another nonprofit organization. But he said he intends to make the SAWC a full-time job in the next few years.

Abdul-Khaliq grew up in Elizabeth, N.J., and was just seven years old when he fell in love with football.

By his senior year of high school, he was one of the top quarterbacks in the nation.

But he failed to qualify academically and enrolled at Fork Union Military Academy, a prep school in Fork Union, Va., where he met McLeod.

Most teams shied away from Abdul-Khaliq. But not Minnesota.

“They were one of the bigger schools that actually stuck with me throughout that whole time. It was sort of a loyalty thing,” Abdul-Khaliq said.

“Coach Mason stayed there the whole time. It was pretty much a shoe-in for me,” Abdul-Khaliq said. “I said, ‘If a guy can stick with me through times like this, then this is the kind of guy I want to play for.’”

Mason said Abdul-Khaliq had plenty of other enticing opportunities but chose the Gophers because they were with him from the start.

Abdul-Khaliq committed to Minnesota and enrolled in the fall of 1999.

Abdul-Khaliq admittedly expected to be the starter as soon as he stepped onto Minnesota’s campus.

But Abdul-Khaliq didn’t play his first season; instead, he sat out as a redshirt. Then, junior college transfer Travis Cole saw a majority of the playing time during the 2000 season.

The two quarterbacks split snaps early in the 2001 campaign, which upset Abdul-Khaliq.

“I’m calling home, complaining,” he said, “but I had to analyze myself and say, ‘Wait a second. You’re not playing the best. This is a business. You either step up to the plate or shut up about it.’”

So he let his play do the talking.

Abdul-Khaliq seized the starting job midway through the 2001 season and held it down for the rest of his career at Minnesota.

He threw for 2,401 yards and 17 touchdowns and posted a conference-best 162.3 passer efficiency rating. He also led the conference in completion percentage and passing yards per attempt.

“Asad was really a tough kid. … He really was a good passer and probably an underestimated runner,” Mason said.

“He came within a game here or there as really going down as an all-time great quarterback for the University of Minnesota.”

Abdul-Khaliq is still around athletics on a regular basis.

He co-operates Training Today’s Athlete, a gym that trains young athletes for several sports, including football and boxing.

Abdul-Khaliq has three sons, the first of which was born in February 2003 when he was still with the Gophers.

“They could care less about sports, and I hate to say it, but I love [that],” Abdul-Khaliq said about his children.

“Don’t get me wrong — if they want to play, they can play. One thing they will be is intelligent, smart and ready. That’s my focus.”