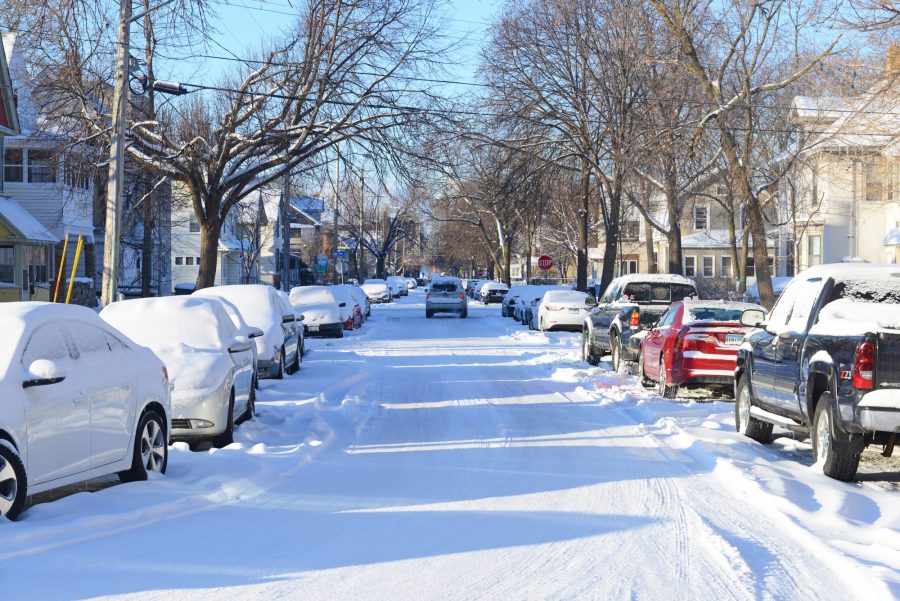 Parked cars along 12th Avenue Southeast in the Marcy Holmes Neighborhood in 2018.

Last year saw an uptick in violent crimes from 2018 in most University of Minnesota neighborhoods and citywide, according to Minneapolis Police Department crime data.

Marcy-Holmes faced a 23% increase in violent crime from 2018 to 2019, illustrated by multiple high-profile incidents in recent months. The year ended with 100 violent crimes reported, including four homicides.

Southeast Como’s violent crime remained relatively stagnant from 24 incidents in 2018 to 26 in 2019. Prospect Park’s violent crime decreased from 31 to 28 incidents. No homicides were reported in either neighborhood.

On Jan. 10 shortly after midnight, a non-fatal shooting occurred on the 400 block of 8th Street Southeast in Marcy-Holmes. The victim described the suspects as four to five males with masks.

Campus has seen one SAFE-U alert this month, following six incidents of robbery and attempted robbery in December.

The most recent SAFE-U alert on campus was a reported robbery at Territorial Hall on Jan. 16. The suspect was a masked man who punched the victim — who the Star Tribune reported is not affiliated with the University — and took the victim’s wallet.

A SAFE-U alert was issued for an attempted robbery at Mariucci Arena on Dec. 28. The suspects were described as two teen males in a dark SUV.

Two SAFE-U alerts were issued on Dec. 13. At 2:45 p.m., an attempted robbery occurred near Dinkytown at 7th Street Southeast and 12th Avenue Southeast. Three suspects, aged 18 to 20 years old, attempted to take the victim’s phone. The other incident involved a victim who was punched by an unknown assailant at 7:30 p.m. The attack occurred near 25th Avenue Southeast and Delaware Street Southeast in Stadium Village. The victim’s grocery bag was stolen.

On Dec. 8 shortly after midnight, an attempted robbery took place near Harvard Street Southeast and Delaware Street Southeast. The suspects were three males wearing face masks driving a silver sedan. One had a handgun.

A suspect in a dark blue hoodie implied he had a weapon during an attempted robbery at 10:24 p.m. at Pleasant Street Southeast and Pillsbury Drive Southeast on Dec. 5.