“Art is fundamentally valuable because it’s not about answers.” 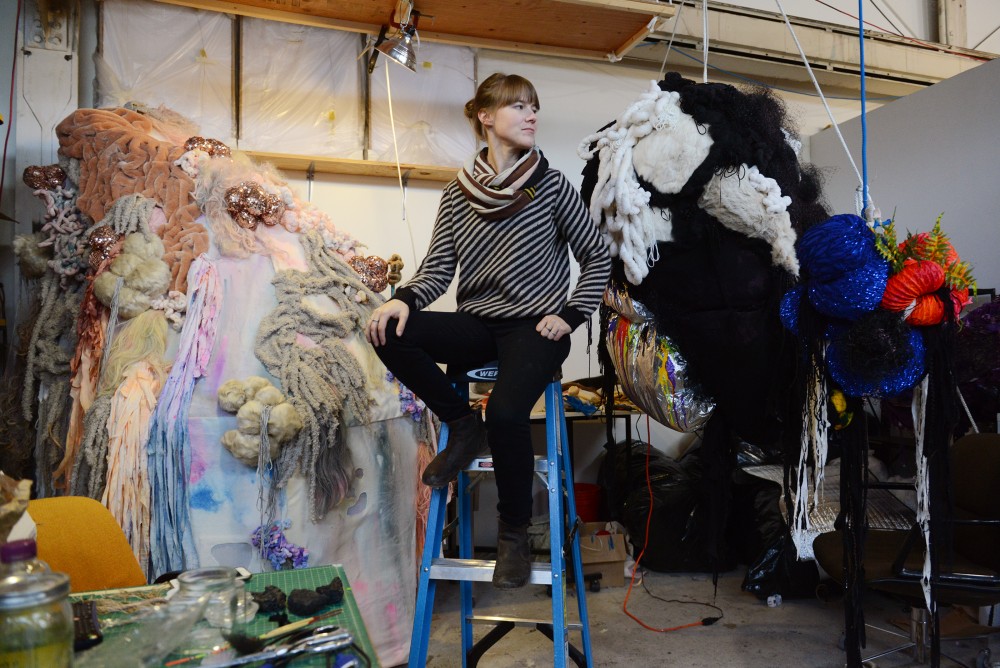 Visual artist and University adjunct Professor Kate Casanova poses with pieces in her Spectra series in her studio in Northeast Minneapolis on Wednesday, Dec. 7, 2016.

“I have an early memory of digging clay out of a pile of sand that was delivered for a sandbox and making little sculptures out of the clay,” Casanova said. “I remember getting up at sunrise and calling out to an empty street, ‘Clay figurines for sale!’ I think my mom and next-door neighbor bought them.”

Growing up, Casanova was surrounded by the art of her mother — a children’s book writer. This environment was crucial to the development of her aesthetic and artistic outlook.

“I remember the click of her keyboard,” Casanova said. “It was the soundtrack of my childhood. The act of creating was instilled in me as not just something of value, but as a necessity.”

Casanova grew up in northern Minnesota in a small town called Ranier. In high school she attended Perpich Center for Arts Education and went on to study sculpture at Minneapolis College of Art and Design. She completed her graduate studies at the University and she now teaches sculpture classes at the school.

This unique mix of academia and creative expression has provided an endless amount of inspiration for Casanova — and her students.

“It’s so energizing to see people discover their own creative abilities,” Casanova said. “We all have them. As a teacher, it’s my job to help them find and cultivate their unique voice. [My students] always surprise me.”

While Casanova gleans something from every student she teaches, her extensive career in art has informed her views on what makes creative disciplines worthwhile.

“Art is fundamentally valuable because it’s not about answers,” Casanova said. “It’s about questions. We look at the world in black and white absolutes. It’s not about an ‘either-or’ binary. Art is about ‘yes, and?’”

Casanova works in multiple mediums: video, found objects, fabric and — most importantly — fungi. Fungi provide Casanova with a meditation on the ambiguous balance of life and death. She finds mushrooms and fungi conceptually unnerving.

Right now, Casanova has turned most of her attention to found animations and video work. Video gives her the ability to work in a dematerialized space.

“Found objects often act as stand-ins for ideas in human culture,” Casanova said. “I might use a Victorian-era chair to talk about ornamentation or kitsch. I’m currently interested in natural objects rotating continually. They speak to the desire to resist entropy that is very much a part of the real world.”

One of Casanova’s video projects is currently being shown at the Instinct Art Gallery as part of its “Verity in Vision” exhibition. Her newest work will be in the Katherine E. Nash Gallery’s upcoming exhibit, “What I Think About,” which will open on Feb. 19.

In the meantime, Casanova is still plumbing the depths of her creative creeds and artistic memories.

“[Growing up], my family had a menagerie of animals, and they played a huge role in shaping my work aesthetically and conceptually. I grew up relating to these animals through bodily contact. Skin, fur, scales. I was fascinated with getting to know them as individuals and how they see the world. I still am.”