Storied Lives: Women and Their Wardrobes will be open at the Goldstein Museum of Design until May 13. 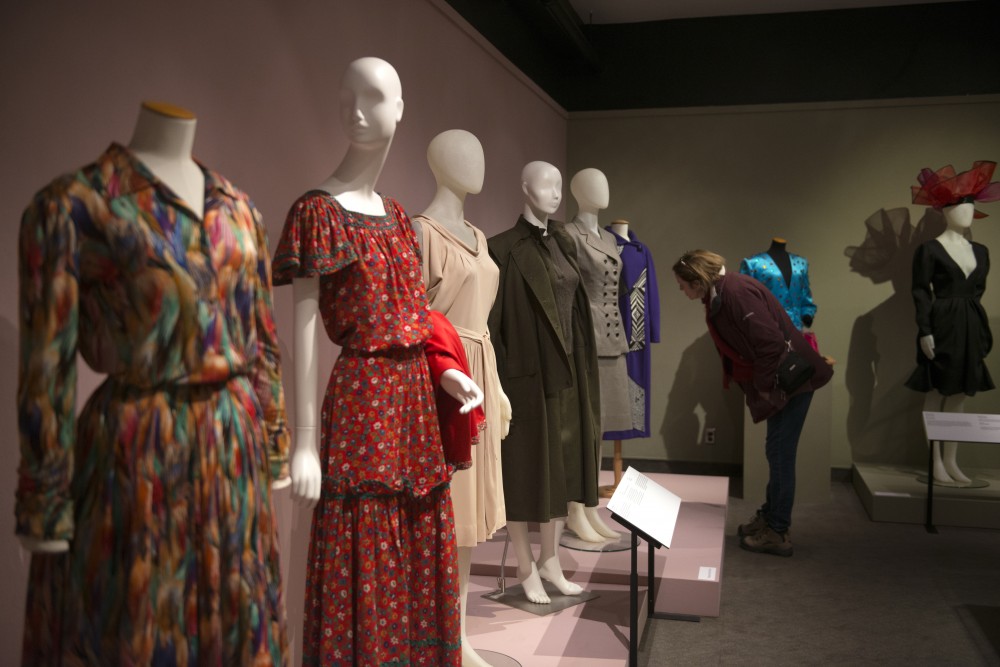 The exhibition "Women and their Wardrobes: Storied Lives" opened at the Goldstein Gallery on Friday, Jan. 26. The exhibit showcases pieces from the wardrobes of three women with prominent careers in the Twin Cities, and explores their motivation behind wearing such lavish garments.

Museum curators hope a new exhibit on the University of Minnesota’s St. Paul campus will inspire attendees to think about their own wardrobes in new ways.

Women and Their Wardrobes: Storied Lives, now open in the Goldstein Museum of Design, is the product of two years of work. The exhibit features mid to late-20th century outfits donated to the museum’s collection by three women from different career backgrounds: Margot Siegel, Dolores DeFore and Beth Kessler.

Siegel was a journalist for Women’s Wear Daily who traveled across Europe. DeFore worked as a retailer for Dayton’s Department Store and Kessler worked as an occupational therapist.

“These are three very different women, but they all felt joy wearing this clothing,” said co-curator Caren Oberg. “The exhibit gives people the opportunity to think about their own closet and the memories that they associate with their own clothing.” DeFore said each article of her clothing in the collection — including a Burberry trench coat and her wedding dress from 1954 — has its own history and memories. Her clothes helped her express herself, she said, and working at Dayton’s Department Store allowed her to be around high-end designer fashions that she wore to parties and events.

DeFore bought her wedding dress last-minute after seeing it at a fashion show. The gown was unique for a wedding dress at the time because it was a shirt dress with a slightly shorter length.

“The clothes may be from the past, but most of them can be worn today, and are still in style,” DeFore said.

The museum chose to display this exhibit to showcase its extensive and historic costume collection, which contains pieces from 1775 to the present, said co-curator Marilyn DeLong.

“The clothes in the exhibit are a precursor to what people are wearing now,” said College of Design Dean Carol Strohecker. Each article of clothing in the exhibit has a description about why it was worn and what the owner liked about the piece, connecting it to historical and personal events taking place at the time. For example, one dress Siegel donated reflects the 1960s Youthquake movement in London that inspired ready-to-wear fashions worldwide.

Most of the clothes in the exhibit were made by high-end designers such as Yves Saint-Laurent and range from office wear to bright and vibrant dresses.

The exhibit also includes interviews from 11 other women who began their careers in the 20th century, describing what motivated them to wear the clothes they did, in order to include as many perspectives and voices as possible, said Museum Director Lin Nelson-Mayson.

In an exhibit display, Kaywin Feldman, the Nivin and Duncan MacMillan director and president at the Minneapolis Institute of Art, describes how her concerns about being judged and doubted for being a woman influenced her fashion choices early in her career as a museum director.

At first, she wore business suits but eventually decided to dress for herself and not for others to better reflect her personality.

The curators hope exhibit visitors will think about why they choose to wear what they do.

“These women wore these clothes not because they had to, but because it was part of their identity,” Nelson-Mayson said.

The exhibit will be on display until May 13.