Minnesota will hold open practices on March 15, March 26, and April 2. 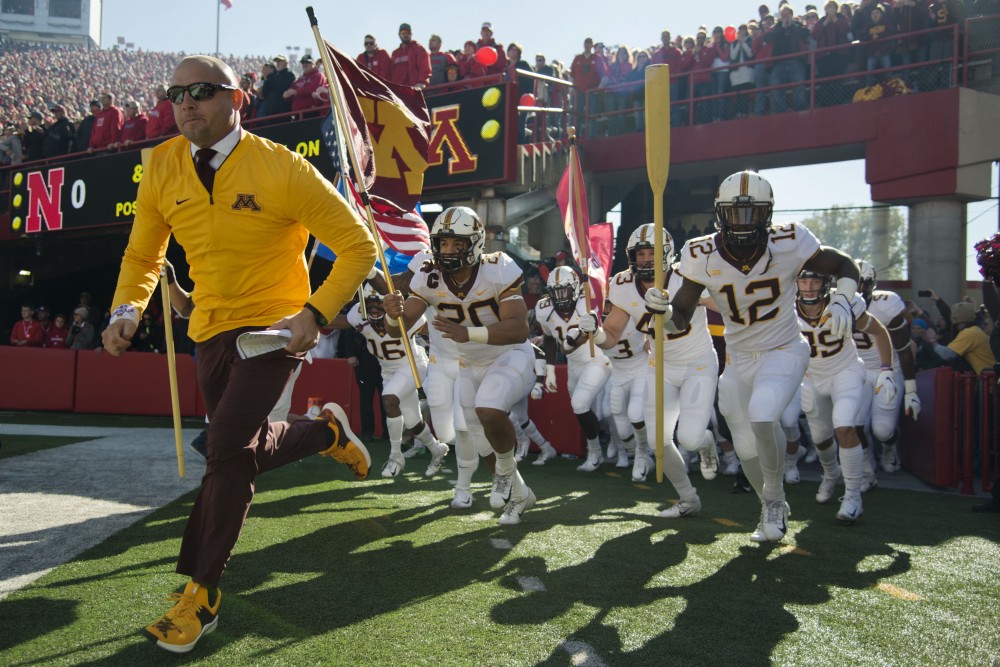 Head Coach P.J. Fleck leads the Gophers onto the field on Saturday, Oct. 20 at Memorial Stadium. Nebraska defeated the Gophers with a final score of 53-28.

After finishing its 2018 schedule with two big victories — a historic win over Wisconsin and a 34-10 drubbing of Georgia Tech in the Quick Lane Bowl — the Gophers have already started preparation for the 2019 season.

“That’s not gonna sit there and just knock people over in excitement, but it makes those small battles as you keep building a culture and a program, those are the things you hang on,” said head coach P.J. Fleck.

The Gophers will have three spring practices open to the public before their inter-squad spring game at TCF Bank Stadium on April 13. The open practices are on March 15, March 26 and April 2 — all starting at 4:45 p.m.

During his first press conference of 2019 on Thursday, Fleck offered injury updates for defensive back Antoine Winfield Jr. and running backs Shannon Brooks and Rodney Smith.

“Antoine’s doing great; it’s nice to able to see Antoine healthy again,” Fleck said. Fleck added that he will practice in the spring and is cleared for contact. “Antoine’s 100 percent healthy.”

Brooks and Smith are further behind in the rehab process and are anticipated to be rehabbing through most of spring ball.

“Rodney [Smith] is ahead of Shannon [Brooks] just naturally because he had the surgery way earlier,” Fleck said. “There’s not a rush [to get them back].”

Fleck emphasized there will be competition among all positions — including quarterback, adding that sophomore Zack Annexstad and redshirt sophomore Tanner Morgan will have a leg up due to their experience starting last season. Annexstad began the 2018 season as the starter and threw for 1,277 yards, nine touchdowns and seven interceptions before getting injured. Morgan started the rest of the way, throwing for 1,401 yards, nine touchdowns and six interceptions.

Included in the competition will be freshmen Jacob Clark and Cole Kramer, who were added to the roster as early enrollees this semester. Fleck said there were 14 early enrollees that joined the team in January, a Minnesota record.

Blake Cashman and Donnell Greene, two seniors from last season, sat out the bowl game to work on training for the NFL combine and preparing for the draft in April. Cashman turned heads with a fast 40-yard dash time and game film, attracting attention from analysts, while Greene could be the first lineman drafted from Minnesota in 12 years. Minnesota will hold its pro day on March 27.

“[I’ve] been in contact with them. They go do their training other places with their agent and things like that, but [I’ve been] very supportive, talked to them a lot,” Fleck said. “[Cashman] did a tremendous job at the combine. I think he set himself up to be in prime position for a lot of opportunities that’ll come his way.”