The weekend included a bench-clearing brawl, 48 penalties and an occasional spell of hockey 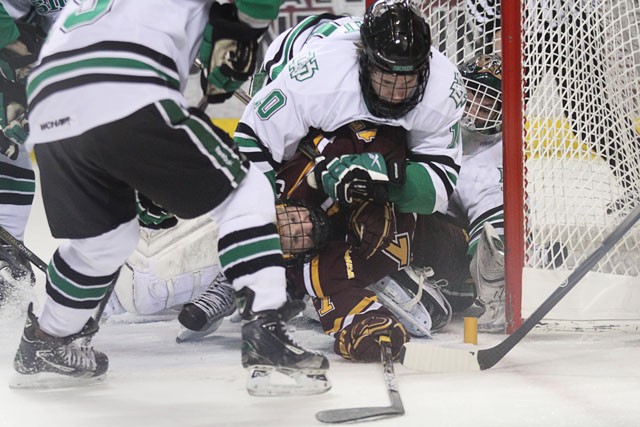 Senior forward Jacob Cepis fights the action in the crease on Friday in the gophers 3-2 win against the UND Fighting Sioux in Grand Forks, North Dakota. The two teams tied the series 1-1.

GRAND FORKS, N.D.–Ralph Engelstad Arena comes about as close to a palace as a hockey arena can.

And to the kings of this palace âÄî which is complete with marble-topped concourses âÄî nothing brings No. 2 North Dakota (17-6-2 overall, 12-4-0 WCHA) more joy than hosting the Minnesota menâÄôs hockey team and inviting 12,000 or so of their subjects over for a weekend to watch maroon and gold bodies fly into the boards.

For the Gophers (10-9-3, 7-7-2) to silence the constant jeers that echoed throughout the arena, affectionately nicknamed âÄúThe Ralph,âÄù they would have to strike early and often.

ThatâÄôs just what they did on Friday when Mike Hoeffel sent a one-timer over Sioux goaltender Aaron DellâÄôs shoulder not 12 minutes into the game. Four minutes later, Jake Hansen extended the lead on the power play.

The jeers, the plastic âÄúrage sticksâÄù and the crowd fell silent to the point that a few sparse âÄúLetâÄôs Go GophersâÄù chants were heard in the crowd.

âÄúWe understand that weâÄôre everyoneâÄôs rival,âÄù Minnesota head coach Don Lucia said. âÄúLike I told the guys, the game is played on the ice between the boards. The fans donâÄôt have anything to do with what goes on the ice.âÄù

Indeed, excluding the plastic Dr. Pepper bottle that came feet away from Nico Sacchetti in the waning seconds of the game, the crowd canâÄôt act on their hate for the opposing team like the players can.

When Brad Malone sent the back of Kevin WehrâÄòs head into the boards as time expired in the second period, a benches-clearing brawl broke out on center ice. Even backup goalie Jake Kremer found his way onto the ice to shove around the opposing reserve goaltender.

âÄúItâÄôs just coming to help for a teammate regardless,âÄù Gophers winger Jacob Cepis said. âÄúIt was pretty crazy wasnâÄôt it? I thought it was going to get really ugly there for a second.âÄù

The ensuing penalties turned the penalty boxes into overstuffed sardine cans, and gave the Sioux a power play that led to the game-tying goal.

But the invading Gophers were able to answer the inevitable onslaught of Sioux offense with SaccehettiâÄôs game-winner five minutes into the final period.

On the same day that senior Alex Kangas underwent season-ending surgery on a torn labrum, Kent Patterson held off the Sioux with 37 saves.

With Kangas out, the weight of the starting job lies squarely on PattersonâÄôs shoulders. Patterson has already proven reliable in KangasâÄô absence, and if there were any doubts about how he would handle the added weight of being the surefire starter, he silenced them Friday.

Minnesota followed the same strike-first formula Saturday night when Mark AltâÄôs swat from the blue line seemed to catch Dell off guard, giving the Gophers a 1-0 lead for the second night in a row.

But less than a minute later, Nick Larson coughed up the puck in his own zone for an easy North Dakota goal, and five minutes later, Malone added the game-winner during a 5-on-3 power play.

For all the excitement and drama of Friday, neither team seemed to gain any traction in the offensive zone, making for a sloppy 4-1 Gophers loss.

Coming off a winless weekend at the Mariucci Classic against non-conference foes two weeks ago, a split against a top-ranked team on foreign soil may come as a surprise to those in the stands, but not to those in the bench.

âÄúWeâÄôre a good team,âÄù Cepis said Friday, with a hint of irritation in his voice. âÄúWhen you beat a team like that you deserve some credit.âÄù