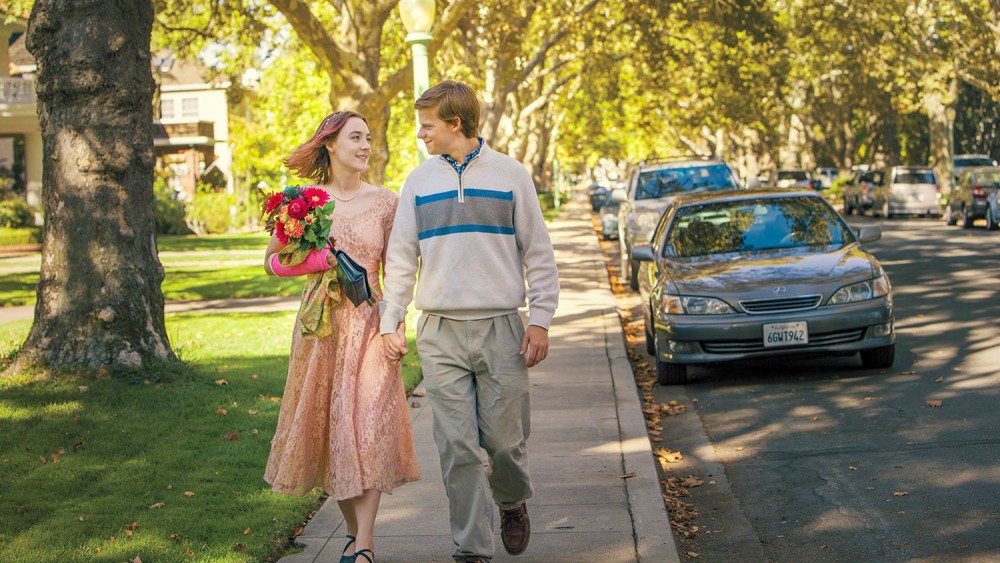 Saoirse Ronan and Lucas Hedges in "Lady Bird". Photo courtesy of A24

“Lady Bird” contains the hallmarks of any classic teenage movie — homecoming dances, prom, first kisses, lost virginities, teachers and nagging parents. But what does “Lady Bird” have that its high school movie peers don’t? Greta Gerwig’s attention to detail and the film’s ensemble of natural actors.

“Lady Bird” follows its title character, played by Saoirse Ronan, through her senior year of high school in 2002. She lives in Sacramento, in her words, “the Midwest of California,” and dreams of being on the East Coast where she thinks that writers and important people live. She argues incessantly with her mother Marion (Laurie Metcalf), who is lovingly described as both “warm” and “scary.” Lady Bird stumbles through life, running for class president and trying out for the school musical and eating communion wafers with her best friend Julie (Beanie Feldstein).

Gerwig avoids the generalizations of high school movies in favor of the well-crafted details that embellish Lady Bird’s Sacramento life. Every moment in the film is well-devised and composed, from establishing shots of Sacramento landmarks, to Lady Bird’s stint in her low-budget high school theater department to her wealthy punk boyfriend who bemoans capitalism and smokes hand-rolled cigarettes.

Lady Bird writes her college essay about Sacramento, and when her high school principal insists that the essay radiates Lady Bird’s love for her hometown, Lady Bird says she just pays attention to the world around her. Her principal argues that loving something and paying attention to it are almost the same feeling.

We feel the same attentive affection from Gerwig because of these details — she has clearly paid attention to the particular aesthetics and emotions of growing up. In its best moments, these details play like a high school highlights reel that points to the drama and successes and failure of senior year and dwindling adolescence.

At times, however, this level of detail is impossibly hyper-focused — we don’t always see the mundanities of Lady Bird’s life outside of the rare sequence in a montage. We also seem to miss out on her leap from rebellious theater kid to careless popular kid, when she forgets about her best friend Julie and lies about her humble upbringing to her new friends. But maybe that unseen misstep is appropriate for Lady Bird; she has made an inauthentic decision. As Lady Bird figures out who she is, we are figuring out who she will become.

Gerwig is careful to remind us that the mother-daughter relationship at the core of “Lady Bird” is clearly special but equally tenuous; Lorelai and Rory Gilmore are an unfair benchmark that Hollywood devises for us. This dynamic would be impossible without the skills of Metcalf and Ronan.

The actresses skillfully dart in and out of laughter and bickering like any real mother and daughter. Metcalf argues with staccato precision as Ronan pontificates and dramatizes with disregard. Throughout the film, there is a slipping feeling of someone being right. Maybe we’re used to picking favorites, especially when watching a movie about a disgruntled teenager arguing with her wise but nagging mother.

But Gerwig avoids this by giving us glimpses into Marion’s perspective, not just Lady Bird’s carefree wandering through her senior year. The result is a balance between the two women, not a one-sided argument. We witness Marion’s work at the psychiatric hospital, her financial struggles, her challenges with her own mother and her balance of humor and criticism.

Every thought in Marion’s mind is present on Metcalf’s face — we see her internal grappling with loving Lady Bird and saying goodbye to her. Instead of simply criticizing her anger towards Lady Bird, we are keenly aware of Marion’s personal frustrations and challenges.

The almost perfectly composed “Lady Bird” reminds us of the trials of loving something or someone that is imperfect, and the pains of leaving those imperfections behind. We all have to say goodbye to our own Sacramentos and our own Marions; may those goodbyes be as earnest and loving as “Lady Bird.”