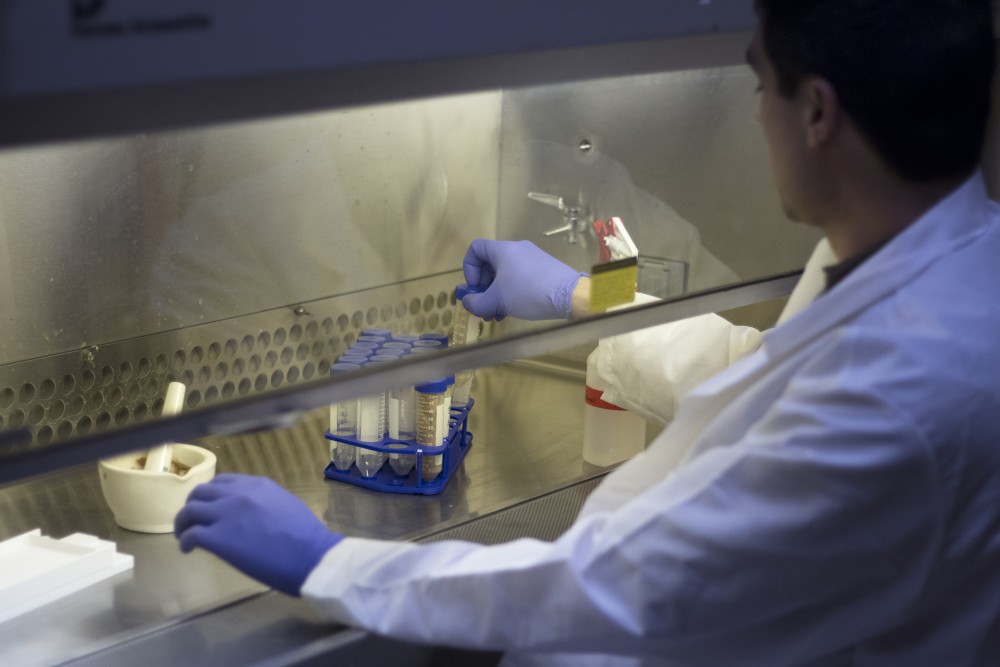 University researcher Matthew Hamilton crushes fecal matter into a powder that will go in capsules to treat Clostridium difficile infection on Tuesday, April 4, 2017 in St. Paul. Fecal Microbiota Transplantation (FMT) introduces new good bacteria from a fecal donation into the colon, pushing out bad bacteria like CDI and avoiding antibiotic use that damages the gut microbiome.

University of Minnesota researchers who have successfully treated a gastrointestinal infection with fecal transplants hope to use the method to treat symptoms of diseases and conditions like obesity and autism.

Fecal microbiota transplantation replaces the good bacteria in the gut with minimal risk of repeat infection. A doctor takes the bacteria present in the feces of healthy humans and transplants them into the patients to restore the gut ecosystem’s of bacteria.

“It gets rid of the disease in 60 to 80 percent of patients. But 20 to 30 percent of the patients get the disease again,” said Michael Sadowsky, a primary researcher on the project.

Clostridium difficile infection is caused when the use of antibiotics to kill off the good bacteria in the gut. It is a common disease in hospitals, especially among the elderly.

Classical treatment for this disease is to give the patient more antibiotics.

Sadowsky isolates the good bacteria from donors for transplantation.

Although there has been previous research on using FMT to treat CDI, the University team’s research is the first to produce results with standardized treatment.

“We are also the first to make a freeze dried capsule material. You don’t have to receive it through a colonscopy. It makes it much more readily available,” Sadowsky said.

Researchers are running clinical trials to see if FMT can help prevent obesity and diabetes in prediabetic patients while decreasing body mass index.

Children who have autism spectrum disorder demonstrate a wide variety of symptoms, in particular stomach issues Sadowsky said. Forty-five percent of subjects in another study showed positive results after FMT.

“With this technique, we can stop prediabetic people from going over the line,” Sadowsky said.