The Arena Grand Prix series kicked off in Minneapolis at the Aquatic Center. 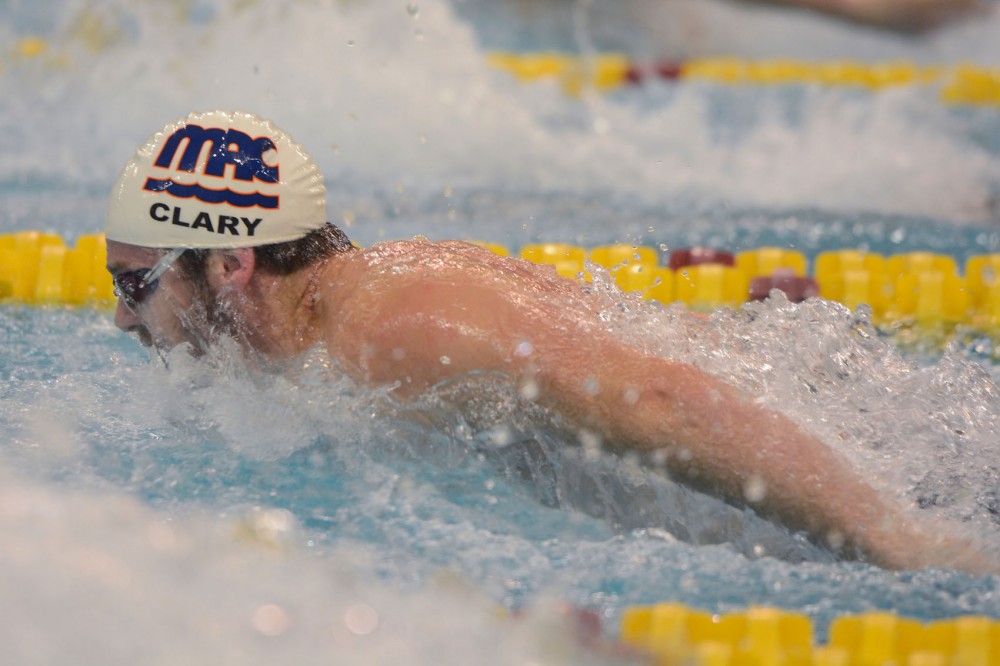 Olympic gold medalist Tyler Clary swims in the 400-yard individual medley on Thursday evening. The University of Minnesota hosted the USA Swimming Grand Prix at the Aquatic Center this past weekend.

Olympians filled the pool at the University Aquatic Center over the weekend, and some Gophers swimmers held their own against them.

Clary won three individual events on the men’s side, while Beisel won three of her own.

In the women’s 200-yard breaststroke, junior Kierra Smith broke the school record in the preliminaries Saturday morning with a time of 2:05.89.

Later in the finals, Smith broke her own record, finishing first in the race with a time of 2:05.12.

She beat out Olympian Caitlin Leverenz, who took third place in the finals.

“In the finals, it was so exciting,” Smith said. “[My] team was all there supporting me and cheering me [on]. It just felt really fun to race it and really fun to be here with them. I am glad that I had the opportunity.”

Head coach Kelly Kremer said Smith’s first-place finish was due to her preparation for the event.

“I think it’s a real confidence booster for her to have a plan [and] to execute a plan,” Kremer said. “To really put up a time [like that] … at this time of the year is really good.  She’s right on track to do the type of things that she wants to do.”

“It was an exciting performance,” she said. “I was really surprised of the time when I hit the wall. I felt really relaxed going in to it, and I wasn’t caught up in a stressful plan. I kind of just swam without any negative thoughts in my head. [Overall], I was really happy with myself.”

Zeiger later finished fourth in the finals, recording a time of 4:09.42.

On the men’s side, Jakub Maly took fourth in the 200- and 400-yard individual medley finals.

He competed against Olympians Tyler Clary and Conor Dwyer in the 400, and then Darian Townsend and Dwyer in the 200.

“I was quite happy with [my] races,” Maly said. “I think I did a good job, especially on the strokes that I need to improve on. The [Grand Prix] is like a test meet for the worlds in two weeks.”

Maly was referring to the FINA swimming world championships in Qatar, which Clary will also attend.

Clary, who won a gold medal at the 2012 London Olympics in the 200-meter backstroke, said he enjoyed his time in Minneapolis.

“It’s good to be here this year,” Clary said. “[Minneapolis] always throws a good meet, and all the fans that we have in the stands are very avid. It’s cool to have everyone here.”