With laundry list of code violations, students voice concerns with The Miles Group

Student complaints include security deposits, safety violations and squirrels in the home. 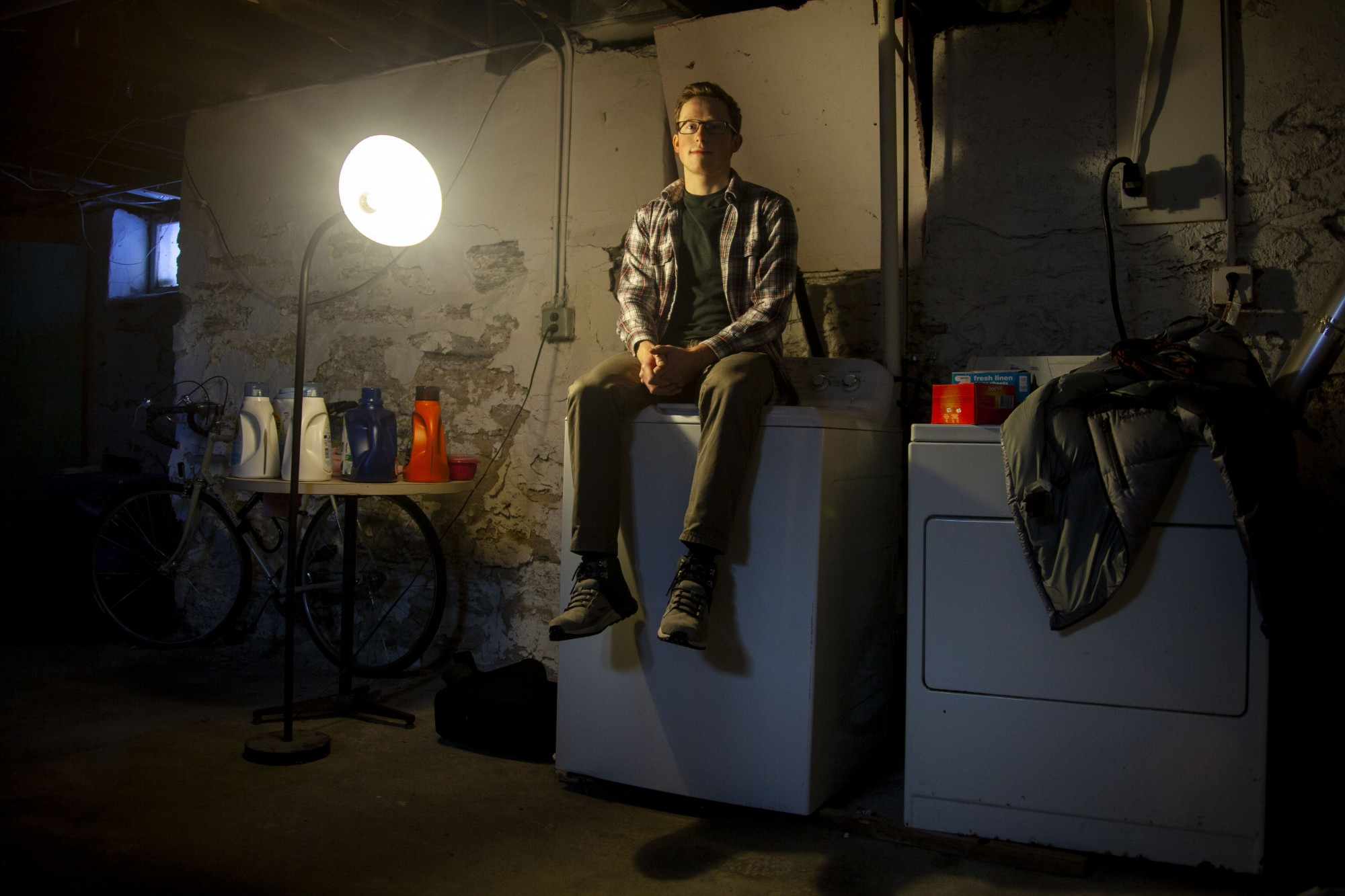 Senior Garrett Williams poses for a portrait in the basement of his former residence in the Marcy Holmes neighborhood on Saturday, Feb. 8. The Miles Group owned property suffered from hazardous heating equipment, a partially collapsed ceiling and an overall lack of maintenance.

Former University of Minnesota student Caytlin Neuburger moved into a house with friends in the Como neighborhood in September of 2017. The house was one of many in the area managed by The Miles Group, a Minneapolis-based property management group.

Problems were apparent as soon as they moved in. The first day, roommate Mads Bartz noted a laundry list of alleged problems: garbage from previous tenants, rotted wood on decks and patios, holes in drywall and leaks fixed with duct tape.

Since coming under the management of The Miles Group in 2002, the property Neuburger and Bartz rented has been cited for at least 94 code violations, according to data obtained from the City of Minneapolis. Seventeen of those, ranging from minor repairs to potential safety issues such as an illegal bedroom, were found in 2019 alone.

The Miles Group manages approximately 40 properties around the University and throughout the Twin Cities. They are one of several property management companies listed on the University’s Office of Off-Campus Living non-compliance list. Companies on the list have received at least three substantiated or unresolved complaints from tenants to Student Legal Services in the past year.

“It is actually rare for a landlord to end up on the list,” Bill Dane, senior attorney for Student Legal Services, said in an email to the Minnesota Daily. “However, once a landlord gets on the list, it is not easy for it to get off.”

Other companies that appear on the University’s non-compliance list include The Arrow Apartments, formerly known as Prime Place, and Millennium Management, which manages at least 11 properties. As of late January 2020, Millennium Management had one unresolved code violation, according to City of Minneapolis data. Properties owned by the Miles Group had at least 39.

Neuburger and their roommates stayed in the house for two years, saying that although the house was run-down, it was less of a hassle than finding a new place.

“We could try and find a better place, and spend all this time when we were in our junior year of college, taking classes and getting ready for finals … in an area that had a huge housing shortage, or just stay put,” Neuburger said.

In an emailed statement to the Minnesota Daily, The Miles Group said they continually work to maintain and upgrade existing properties they manage, and, in some cases, elect to tear down houses to build newer rental properties.

“We work very hard to be accessible to all of our tenants and feel we have a very good relationship, many long lasting, with the people we rent to,” the email said.

When Garrett Williams, a fourth-year engineering student, moved into a Miles Group-managed property last year, functional problems started to appear right away. Some were rather funny, like the squirrels he shared his home with — he said he once saw tiny paws scampering across a fluorescent light — to the more serious, like improper outlets and a leaky roof that led to water damage.

Williams said the other landlords and property managers he has interacted with besides the Miles Group have maintained the properties better and been more responsive to maintenance requests.

“The other landlords I’ve had in the past and currently, we haven’t had these big issues,” Williams said. “Especially around the University of Minnesota, where there are so many students, they know that people need houses. As long as super major stuff doesn’t happen, I think they know that college students will deal with it.”

Emily Roach, a biology student who lives near the intersection of Como Avenue and 26th Avenue Southeast, said that her house, one managed by The Miles Group, is pretty on par with those in the area: it is old, creaky and a little bit drafty.

She has relatively few complaints, she said. She likes that The Miles Group allows her to keep her dog at home. However, the dysfunctional stove can occasionally prove a consternation: it is a gas stove, but she has to grab a lighter every time she uses it to ignite the flame.

She also said a storage area right off her bedroom is susceptible to mold growth.

“I recently opened the door and everything was just covered in mold. Like, my bed is right next to this,” Roach said.

The address where Roach currently lives has three unresolved code violations, according to Minneapolis data. Despite Minnesota state law requiring a landlord to post a notice about citations for tenants’ knowledge, Roach said she was unaware of any code violations.

An emailed statement from The Miles Group read, “we work closely with City of Minneapolis Rental Licensing and Inspections to make sure the properties are regularly inspected and up to code.”

Code violations are not the only issue The Miles Group has faced — some former tenants have sued the company, but settled out of court.

Senior Elena Bueltel and five of her friends fell in love with a Miles Group property off of Talmage Avenue in Como. The six of them, four of whom were unrelated, signed the lease in October with no issues — until they received an email from the company in June of 2017, she said.

“Someone from The Miles Group was like, ‘Are you all related? If not, we will need to release two tenants and rewrite your current lease agreement,’” said Bueltel.

A Minneapolis ordinance at the time capped rental tenants at two related and three unrelated individuals, making the contract with six signees null and void.

“We were like, ‘Wait, what’s this delay for?’ We had no idea about this law, but [The Miles Group] knew we had six people when we signed in October,” Bueltel said.

Buetel utilized Student Legal Service and sued for losses; she said they settled out of court, recouping the deposits they had placed on the unit. But Buetel and her roommates still had to quickly find a new place to live.

Eric Hauge, the executive director of HOME Line, a Minnesota tenant advocacy organization, said that students renting from The Miles Group have reached out to the organization in the past.

Though Hauge said he could not characterize the number of code violations or rental issues, he said that the primary reasons for calls to the organization were property maintenance, repairs and withheld security deposits.

“Both prospective student tenants and current student tenants should recognize that their lease is a serious legal contract,” Hauge said in an email to the Minnesota Daily. “They should get legal and practical advice before entering into it.”

Chris Stanley never rented a property managed by The Miles Group, but in 2016, he was still impacted by their practices. He was leaving through the back entrance of a friend’s house, a Miles Group property, when he allegedly fell into an uncovered egress window, a deep window sill that allows for escapes from a basement.

The fall caused a massive cut in his arm and jammed his teeth, which required a trip to the ER, two root canals and six months of braces.

Though Stanley died of unrelated causes in 2017, his mother, Melissa Gonzalez, still recalls what ensued after his fall into the egress window: many calls to The Miles Group that went unanswered and an eventual settlement.

“We are not litigious people, but we felt this was important,” Gonzalez said. “I don’t know if they ever covered that egress window hole, but it was a hazard.”

Because settlement cases, such as Bueltel’s and Stanley’s, are resolved out of court and out of the public record, the exact number of settlements with The Miles Group are unknown.

“We have handled a number of matters with [The Miles Group] over the course of the past 15 years,” SLS Senior Attorney Bill Dane said. “Some of those matters have been resolved through negotiation. Others have been more difficult to resolve and have even required litigation.”

A comment from The Miles Group confirmed that the company is intent on getting off of the noncompliance list.

“We have had great interaction with Student Legal Services over the past year to make sure our relationship with them is open and we can work towards common goals,” an emailed statement said.

Questions arise over a “routine range” of violations

Karre Wagner began renting from The Miles Group at the start of her sophomore year in 2016. However, she said she quickly realized that the property was not exactly what she signed up for.

Wagner said she was under the impression that she would be renting one of three private bedrooms. This was not entirely the case; as Wagner describes it, “you had to actually walk through my bedroom to get to the other two.” She also noted mice and electrical issues.

According to public records, there were at least 15 violations cited by the City of Minneapolis at the address where Wagner resided between 2016 and 2017, two of which included potential safety violations.

Kellie Jones, director of housing inspection services for the City of Minneapolis, said that The Miles Group were within a “fairly routine range of violations” for property managers of their size. She added that the company generally corrects issues within an allotted time frame, but that they tend to have yearly violations.

Of the 11 interviewed past and current tenants of properties managed by The Miles Group, none said they were surprised that the company appeared on the University’s noncompliance listing.

Kendre Turonie, program director for Off-Campus Living, said that once a property owner or management company makes the list, they are not allowed to advertise on the University’s Off-Campus Housing listing services or participate in the Off-Campus Housing Fair.

She typically notifies other University entities, including the Office of Student Experience, which housing companies are not compliant with University policy.

“By publishing the [non-compliance] list, we’re just trying to be transparent. Having that list in no way means that people shouldn’t live with these folks,” Turonie said. “If anyone is thinking about renting from there, we just want them to be their own best advocate.”

Remaining on the noncompliance list is not necessarily permanent. Removal is possible, though the process is arduous and takes at least 18 months of compliance.

“I can say, anecdotally, that it seems like The Miles Group has made significant progress toward being eligible for removal from the list,” Dane said in the email. “SLS views the removal of a landlord from the noncompliance list as a very positive development.”

During her lease with The Miles Group, Wagner eventually had a falling out with her roommates. That, coupled with what she said were poor living conditions, proved too much.

“At that point, I just moved out,” Wagner said. ‘I’m going to cut my losses, because it’s just not worth it anymore.”

Editor’s note: Kendre Turonie sits on the Minnesota Daily’s Board of Directors.