Peronnin adjusts to golf in U.S.

The junior shot a 70 in her final round at Minnesota’s first fall tournament of 2015. 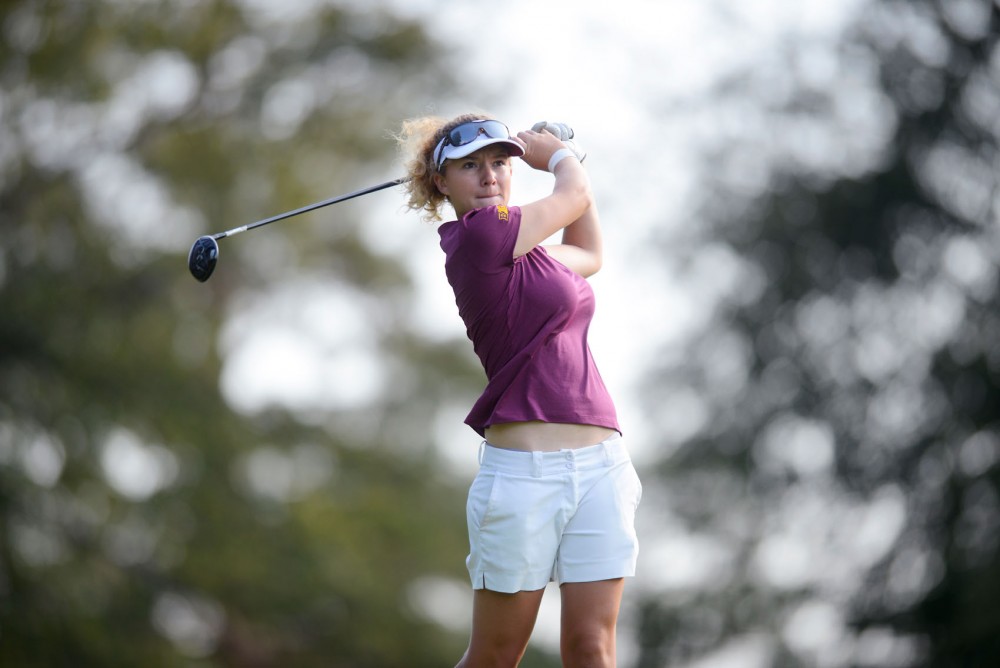 Junior Emie Peronnin swings her club at the Minikahda Club at the Minnesota Invitational on Tuesday, September 15.

One of the better performances from the Gophers last week came from an athlete all the way from France.

Junior Emie Peronnin, from FrÃ©jus, France, shot a 233 in total, highlighted by a 70 in the final round.
“I was very happy with her last round,” head coach Michele Redman said. “She’s a really smart girl. She reads a lot. If she doesn’t have the information, she’s going to look for it. So I thought she transitioned [to the United States] very well.”
Peronnin is the only player on the team from France, but she is not the only French speaker for the Gophers. Sophomore Sabrine Garrison, who hails from Calgary, Alberta, speaks French and is one of Peronnin’s close friends on the team.
“It’s been really fun for me and her to be able to talk,” Garrison said. “For her to have someone to speak French with and for me to practice my French [is important]. …
Coming here and not only being able to converse but to go to school and play golf and be very busy [is impressive]. So, she’s jumped right into it, and she’s not afraid.”
Peronnin admits the courses she played in France require a different dynamic compared to the ones in the United States.
“French courses are definitely shorter, most of them, but way more narrow,” Peronnin said. “So most of the par three’s I [use] a wedge, where as here I get a seven iron or five iron.”
The French golfer has adjusted well on the course but has experienced slight struggles adjusting to certain aspects of American culture.
Peronnin said finding food that she liked in the United States was difficult at times.
“Eating at the dorm restaurant [entailed] a lot of burgers and fries,” Peronnin said. “I was trying to adapt to that, and now that I can cook [for] myself, it is much better.”
Men’s team heads to Washington
The men’s team will be playing in Cle Elum, Wash., starting Monday, to compete in the Husky Invitational.
The team is coming off a disappointing 14th place finish at the Gopher Invitational last week and is looking to rebound in the upcoming tournament.
“As a team we need to be smart about our decision-making,” sophomore Riley Johnson said. “Ball striking is huge and putting. We just need to make some putts, save some strokes and make some birdies.”
The Gophers will face off against both the University of Oregon and the University of Washington in the tournament, two teams ranked in the top 25 in the NCAA.
“[The competition] is really good,” junior Matt Rachey said. “It’s northern teams and PAC-12. I know that if we play our game, we’ll finish on top.”
The competition will take place amidst a scenic backdrop, as the Tumble Creek course offers mountain views.
“[Tumble Creek] is very similar to Spring Hill [in Wayzata, Minn.]. It has a very tight tree line and quite a bit of elevation change,” said head coach John Carlson.  “Hopefully, we fare better as a team. … I thought we played with a lot of nerves [last week], and the shots just weren’t very crisp.”
Delete Image
Align Left
Align Center
Align Right
Align Left
Align Center
Delete Heading