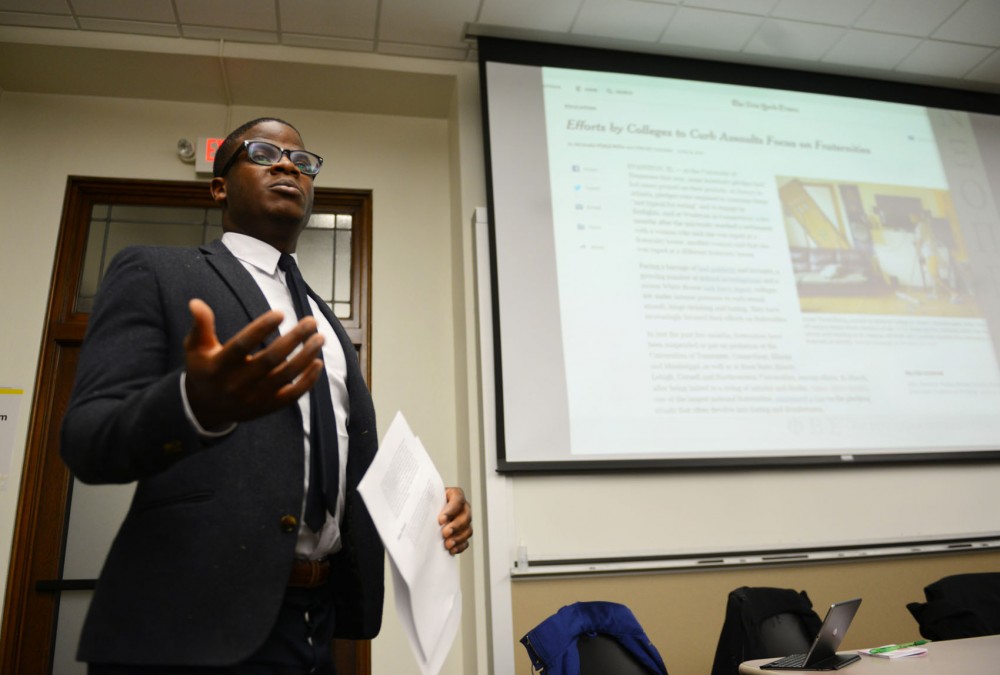 Some University of Minnesota fraternity members say they’re faced with the tough decision of staying quiet or standing up and saying something — and potentially putting their reputation on the line — when their fellow brothers are harassing women at parties.

And this type of internal conflict isn’t uncommon, members say. Brothers may feel pressured to conform to what they think is society’s view of masculinity, which in turn can perpetuate problems within the greek community, like sexual harassment and hazing.

A panel of University officials and greek leaders met with about 50 students and alumni on campus Thursday to discuss “toxic masculinity” — the idea that men have to be unemotional, sexually aggressive and violent — and how the greek community can break down that stereotype.

“A lot of the issues that arise from the greek community — like sexual assault, hazing, gender-based discrimination — all are causes of toxic masculinity,” said George Darvehn, vice president of Phi Beta Sigma Fraternity and moderator of the event.

Darvehn’s fraternity hosted the event, which educated students about the dangers of “toxic masculinity” and its harmful effects on the campus environment.

“We wanted to have a discussion about masculinity [on campus], and we saw the greek community as a perfect avenue to jumpstart that discussion,” he said.

Some sorority members noted at the event that women are often encouraged to look out for one another at parties, but fraternity members don’t necessarily feel the same responsibility to intervene when their brothers are acting inappropriately toward women.

If problems that stem from “toxic masculinity” continue, the greek community will suffer, Darvehn said, noting recent national chapter sanctions and closures due to sexual assault and hazing incidents.

“I see [toxic masculinity] opening up a way for greek organizations to become inactive on campus,” he said. “And if issues like this continue to happen, it can really deteriorate not just organizations but the individuals in those organizations as well.”

Panhellenic Council President Talia Saville added that men acting as patriarchs may also lead to the repression of women in the greek community.

In addition to greek members’ perception of masculinity, a problem persists with many sorority sisters aiming to conform to what they view as society’s ideals, she said.

Many sisters feel an obligation to focus on their looks or find a husband instead of working toward career goals, Saville said.

“It promotes rape culture and turns a blind eye to sexual assault and sexual harassment within fraternity houses,” he said.

Interfraternity Council President Cameron Schilling said while he’s initiated conversations about masculinity and what it means within his own fraternity, he didn’t realize how damaging it could be for the greek community.

Assistant Vice Provost for Student Life Lamar Hylton emphasized how important it is for greek members to address the issue because many students see them as leaders on campus.

Based on the event’s success, Darvehn said his fraternity intends on hosting similar discussions on the issue in the future.

“There will definitely be a negative impact on campus if these issues are not addressed,” he said.