New improvements are underway in the Cedar-Riverside mainstay with a major focus on community involvement. 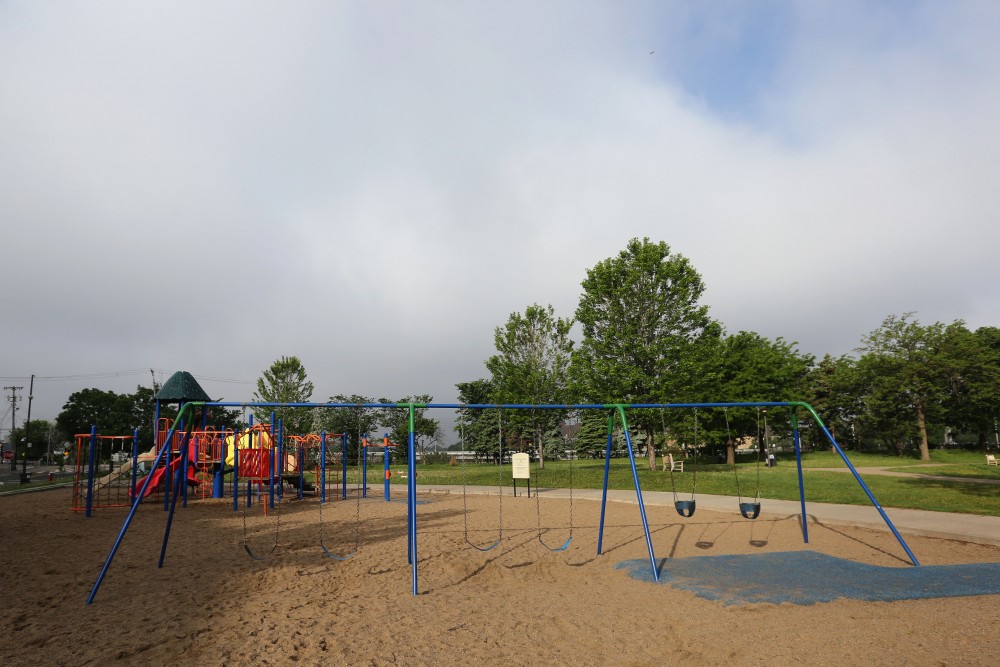 Currie Park is seen on Thursday, May 31, 2018 in Minneapolis. The Minneapolis Park Board is making improvements to the park such as converting the wading pool into a splash pad and upgrading the playground.

Phase one of a $2.8 million dollar improvement process is underway in Cedar-Riverside’s Currie Park.

Currie Park, which is adjacent to Riverside Plaza in the Cedar-Riverside neighborhood, is beginning the first phase of the park’s master plan project for improvement as set forth by the Minneapolis Parks and Recreation Board. Project coordinators have stressed equity and accessibility in the improvement’s planning stages.

Updates mentioned in Currie Park’s master plan include the addition of a new splash pad and an inflatable dome for winter, along with renovations to the existing basketball court, tennis court and playing field.

Phase one includes replacement of the wading pool with an updated splash pad and replacing the restroom building with a more contemporary facility, according to Daniel Elias, project manager with the Park Board.

The park is ranked 17th in the city on the Park Board’s 20-year capital improvement plan to ensure equity, based on a number of criteria, including an area’s density, poverty, amount of green space and youth population. Elias said these factors, along with the park’s aging condition, make it a priority for the board.

“Outside of downtown, [Cedar-Riverside is] the densest residential population within the city of Minneapolis, with an extremely high youth population and an extreme lack of green space,” he said.

Of the $2.8 million allocated for Currie Park’s improvements, $600,000 is designated for 2018 and initiating the design phase.

A community engagement session was held on Thursday in a Riverside Plaza lobby to allow the Park Board to receive feedback about the improvement plans and to ensure community needs are reflected.

Abdirahman Mukhtar, community outreach and access coordinator with the Park Board, said the project team hopes to significantly involve the Cedar-Riverside community in the project through engagement sessions.

“So far, it’s amazing … Making sure that community’s voice is part of the project [is what we need],” Mukhtar said. “And letting them know also the timeframe when things will start, when construction will start, when it will end, but also what it looks like at the end … we’re meeting them at home, basically.”

He said the community in Cedar-Riverside has expressed enthusiasm about the proposed improvements.

“It’s really great news because when they see the new design…  they’re very happy, because it has been a while since we have done a project like this in this neighborhood, and they are very excited,” he said.

District 3 Park Board Commissioner AK Hassan, who represents the Cedar-Riverside neighborhood, said this is a much-needed improvement that he has advocated for since before running for office. He hopes for community involvement in the planning process and expressed a need for accessibility for seniors.

“I’m excited to support and make sure it happens. I’ll do everything that it takes to make sure they bring resources in parks that [work] for everyone and that [are] accessible,” Hassan said.