The school record-holder in several categories will be remembered as a Gophers' great. 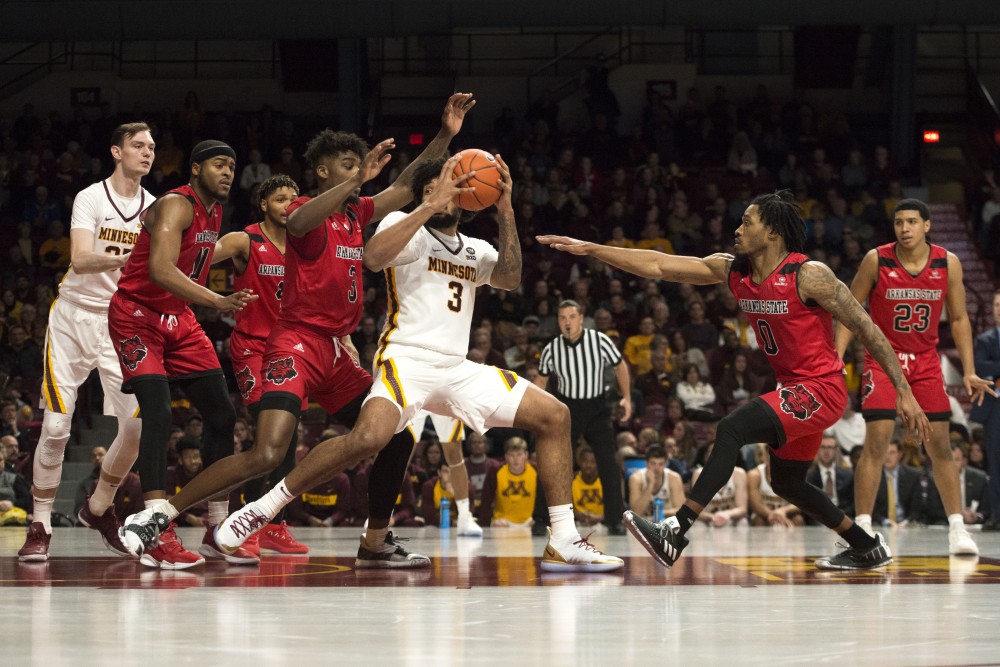 Senior Jordan Murphy is still playing with the team, but has been honored before two games at Williams Arena this season.

Prior to the game against Nebraska, a video was shown congratulating him on breaking Mychal Thompson’s record for most rebounds in school history, which had stood since 1978.

In that game, he recorded his 52nd career double-double, breaking Jim Brewer’s school record. Before the next game against Arkansas State, Murphy received recognition for that accomplishment as well. Most likely, Murphy will continue to climb the record books before he stands at center-court prior to his senior-day game in March.

“It’s unbelievable,” said head coach Richard Pitino, who brought Murphy to Minnesota as part of his 2015 recruiting class. “What he’s been able to accomplish on the court is phenomenal. He’s shattering some records by some really, really good players, and he’s [6 feet, 6 inches]. That’s all sheer will, heart and determination.”

Last season, Murphy’s numbers proved some of the best in the country. He averaged 11.3 rebounds per game, the seventh highest total in the country and first in the Big Ten. His 24 double-doubles were tied for the nation’s lead with Arizona’s Deandre Ayton, who was the first-overall selection in last spring’s NBA draft.

As a junior, in addition to rebounds Murphy also led the Gophers in points and steals. For his outstanding play, he was named Big Ten player of the week three times and was a second-team all conference selection as voted on by the media. However, Murphy doesn’t pay much attention to his awards or records, instead focusing on what the team can accomplish.

“It’s a good testament to what I’ve done in my four years here,” Murphy said. “But at the same time we just want to win, make it back back to the [NCAA] Tournament, and get back to the top of the Big Ten. At the end of the day, I want this to go down as one of the best teams in Minnesota history.”

In order for the current team to make it to the NCAA tournament, it will need the front court to provide more depth than it did last year when Minnesota finished at 15-17. Integral to that depth are freshmen Daniel Oturu and Jarvis Omersa.

Due to the youth of Oturu and Omersa, Murphy has taken it upon himself to mentor his new teammates. He knows that for freshmen, it’s important to take things slow and not try to force anything on the court.

“Take it one play at a time, that’s one thing I just keep telling them,” Murphy said. “It’s one of those things where you’re just not going to be great over night, you have to be patient.”

Murphy knows the importance of improving every day. Although he came off the bench to begin his career, he became a starter before the conference slate began his freshman season and has started every game the Gophers have played since. Senior Dupree McBrayer has been with Murphy every step of his college career — witnessing first-hand how he’s worked to improve.

“He’s always had the athletic ability,” McBrayer said. “Ever since [freshman] year, he’s been working on his skill a lot. As you can see, he’s got a lot better. He’s one of the best players in college basketball. He just wanted to get better every year.”

Off the court, those around him say Murphy has a strong work ethic in everything he does. His coach has praised him for being a strong student and model member of the University community.

Minnesota is currently on a short break so players can focus on their final exams. They don’t have another game until Dec. 21 when they host North Carolina A&T.