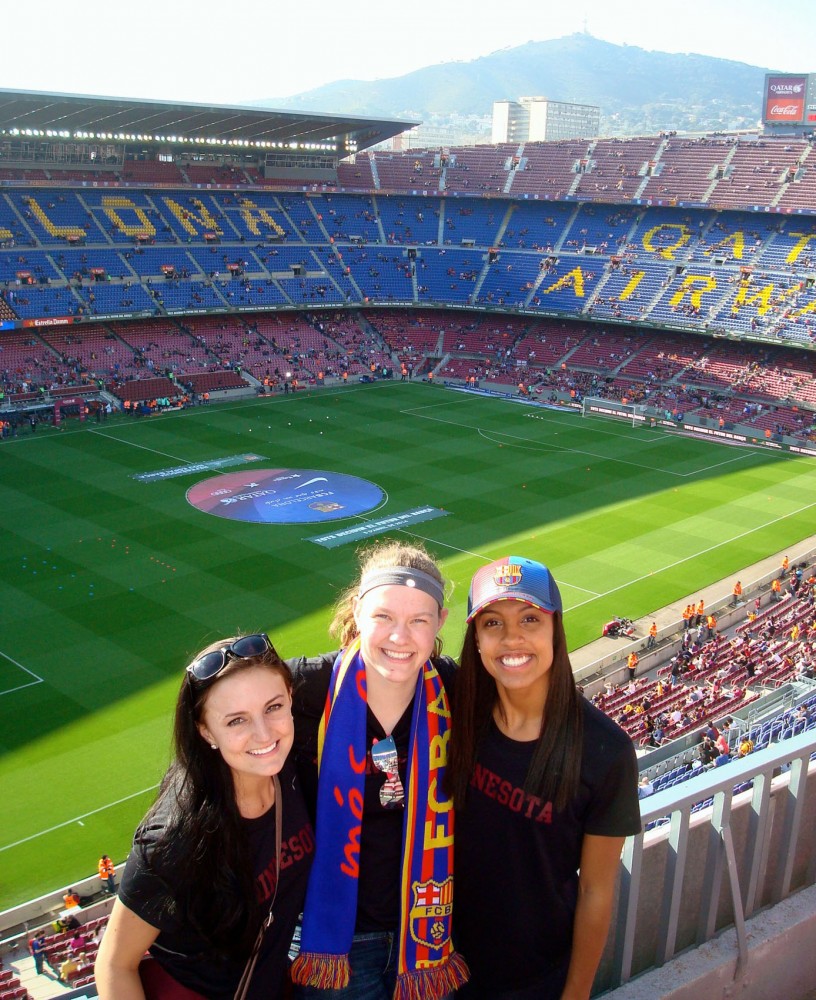 Ashley Pafko, Tarah Hobbs and Simone Kolander. This picture was taken at FC Barcelona's game against Osasuna on March 16. Barcelona won the game 7-0.

The Gophers women’s soccer team spent its spring break overseas, immersing itself in one of the world’s most soccer-crazed cities.

Minnesota’s entire team traveled to Barcelona, Spain, during the break, where it played three games, toured the city and even caught an FC Barcelona game.

Minnesota head coach Stefanie Golan said she spoke with a few donors about the trip at the beginning of last year.

The Gophers fundraised the entire $92,528 cost of the trip by hosting soccer clinics and an auction and by participating in a phone-a-thon, among other endeavors.

Golan said the team wouldn’t have taken the trip if it had not met its fundraising goal. She said she knew around December that the trip would happen.

The Gophers left for Spain on March 14 and arrived in Barcelona after about 20 hours of travel. They spent their first three days traveling and touring the city and attended the FC Barcelona game on the third night of the trip.

Minnesota played its first of three games March 18 and defeated Badalona CF 7-0. It played its second game the next night, against the top-tier club CF Sant Gabriel, and lost 3-0.

The Gophers played another top-tier club, RCD Espanyol, a night later and lost 1-0. They gave up an early goal that night, Golan said, but settled in and played better during the rest of the game.

Thyken said the Spanish teams played a technical and possession-oriented style, something the Gophers hope to emulate next season. She said her team started to click more during the third game.

“The passes started getting right to feet instead of being 5 yards off either way,” Thyken said. “The communication and everything just started to flow.”

Minnesota players and coaches spent their final two days in Barcelona sightseeing before returning to Minneapolis on March 23.

The trip was the highlight of the team’s spring schedule. Minnesota also hosted and won two indoor tournaments during the spring season and tied Wisconsin 0-0 in a scrimmage Sunday.

Golan said she could see the trip’s positive impact during the Wisconsin scrimmage.

“The first 30 minutes, we totally dominated the play,” she said. “We had the ball, and we had it in their end a lot.”

The Gophers will scrimmage Minnesota State-Mankato on Sunday and then will focus more on individual training.

Golan said the team would like to do a trip like this every four years, if possible.

“For us to go to a culture where soccer is No. 1 and it is a focus point, I think was a tremendous opportunity,” she said.