Recruiting for men’s and women’s swimming and diving

Many swimming and diving prospects have signed with Minnesota these past few weeks. 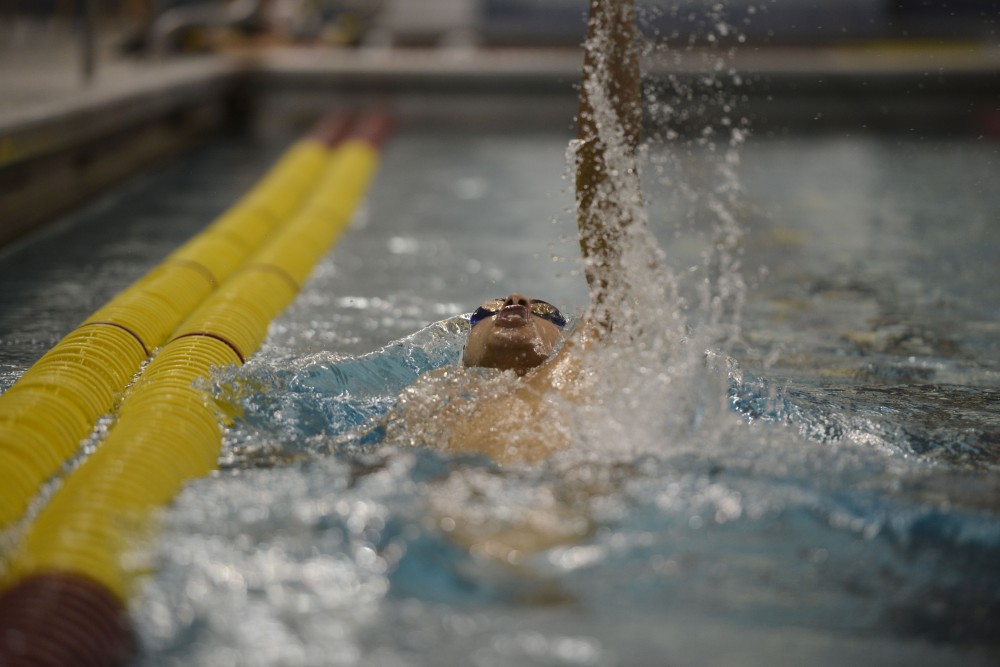 Junior Erik Hunter competes in the 200 Yard Backstroke race during the Minnesota Invitational on Saturday, Dec. 2, 2017 at the Jean K Freeman Aquatic Center.

In the last few weeks, a wave of student-athletes have committed to and will be joining Minnesota’s swim and dive teams in future seasons.

The Gophers will welcome swimmers and divers from all over the country including California, Colorado and Texas. Among the names of the many recruits released in the past few weeks are the top-recruit out of Massachusetts, Maggie Summit, Minnesota’s own No. 1 prospect, Jordan McGinty and Wisconsin’s No. 1 recruit, Grace Bennin.

When thinking about the recently committed athletes, the head coach of the men’s and women’s swim and dive teams Kelly Kremer is excited about the future of his program.

“We targeted people who love the sport, who are very appreciative, who are committed to being the best student-athletes that they can be, and who are committed to helping Minnesota move forward and up the ranks at NCAA’s,” Kremer said. “I couldn’t be happier with the people that we’ve signed.”

The current freshman swimmers and divers are pleased with their choice to attend the University of Minnesota. They said the coaching staff was genuine in their recruitment efforts, and the coaches value them as more than only talented athletes.

When weighing the options between Minnesota and other universities, one notable facet that stuck with freshman Kelli McCarthy was how the coaching staff cared about her as a whole person, not only a swimmer.

“They looked at me as someone who cares about swimming but also as a person who is interested in academics, who will of course help the team, but also is there to contribute more than just fast times,” McCarthy said.

Though Kremer is the head coach for both the men’s and the women’s swim and dive teams, his recruiting process for both male and female athletes is the same. He takes the time to get to know each prospective student, where he learns their interests and goals.

“In terms of how you show them the University of Minnesota, show them the Twin Cities, you direct it to them depending on who they are and what they’re looking for. I think for both men and women, it’s relatively the same,” Kremer said.

“[We look for] people who we truly believe that when they come to the University, their best swimming or their best diving is in front of them. And really, they can only be that way if they truly love what they’re doing,” Kremer said.

Kremer and his athletes look to finish out the 2018-2019 season, and will then prepare for the next class of swimmers and divers to join them in their efforts to better the program.