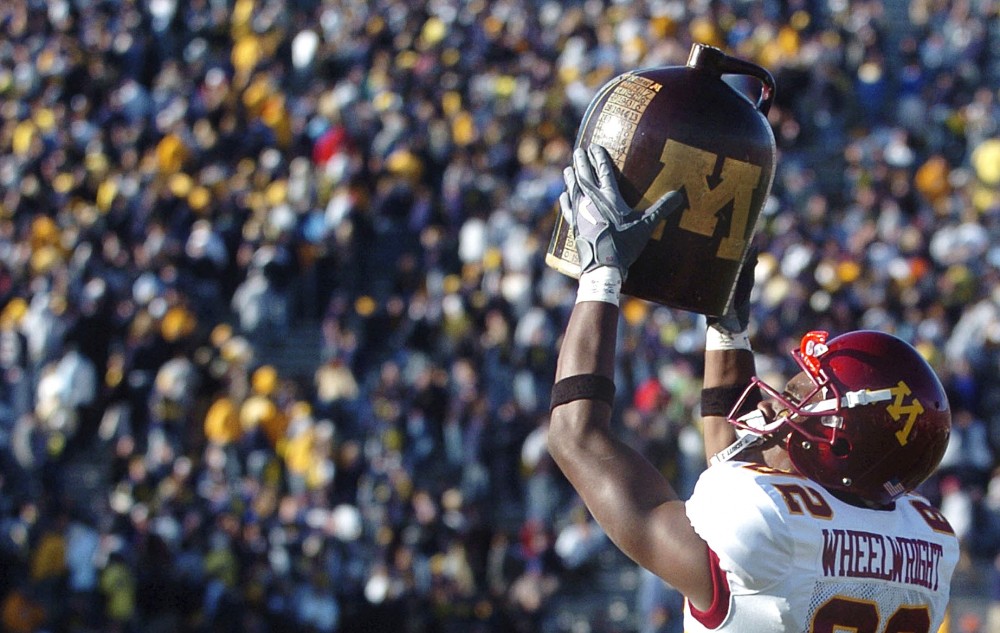 Outside the Minnesota team room at the Gibson-Nagurski football complex is a trophy case. A small sign inside it says, âÄúThe Little Brown Jug,âÄù and gives a brief description of the trophyâÄôs history and significance. The case is empty. Instead, the Little Brown Jug sits somewhere at the University of Michigan, where itâÄôs probably become quite comfortableâÄîthe Wolverines have had the trophy for 28 of the last 30 years. Elsewhere, Wisconsin has Paul BunyanâÄôs Axe and Iowa has Floyd of Rosedale; the Gophers have two more empty cases. But they also have three opportunities in the next three weeks to give the trophy stands some company. ThatâÄôs why the JugâÄôs empty resting place is displayed so prominently at the football complex. âÄúItâÄôs a daily reminder of what we donâÄôt have,âÄù sophomore quarterback Adam Weber sai d, referring to the case. âÄúI think it needs to be filled.âÄù That wonâÄôt be easy. Michigan has utterly dominated the 105-year-old rivalry, especially at the Metrodome; the Wolverines have yet to lose there. Overall, the series record is 65-22-3 in favor of Michigan. As head coach Tim Brewster points out, thatâÄôs hardly a rivalry. âÄúWeâÄôve got to win more football games to make it a rivalry,âÄù he said. âÄúWeâÄôd like to compete on a level with Michigan year in and year out where weâÄôre winning some football games against them.âÄù The Gophers can start Saturday when the Wolverines visit the Metrodome for a final time. No doubt the Jug would be given a nice place to rest at TCF Bank Stadium next year. One down, two to go. Then Brewster can trot out the AxeâÄôs vacant case before Minnesota leaves for Madison. Finally, FloydâÄôs home before the Hawkeyes come for the season finale. This season seems to be as good as any to snatch back all three trophies âÄì Michigan and Wisconsin are underachieving to say the least, and Iowa is typically an evenly matched opponent. The Wolverines are 2-7 and will miss a bowl for the first time in 33 years ; the Badgers, pegged to finish second in the conference before the season, are 1-5 in the Big Ten . Not like record has anything to do with it; the 1-10 Gophers were tied with 8-3 Wisconsin going into the fourth quarter a year ago . Minnesota might be expected to win its final three games, but Junior linebacker Lee Campbell knows anything can happen. âÄúI think anytime youâÄôre playing for a trophy game, both teams are going to come out with their hair on fire,âÄù he said. Ultimately, the rivalry games arenâÄôt played for a jug, an axe, or a pig; theyâÄôre played for pride and tradition. And what a tradition it is. The Little Brown Jug rivalry started in 1903 when the Gophers tied a Michigan team that entered the game with a 28-game win streak. The game was called with two minutes remaining because fans stormed the field after Minnesota scored a touchdown to knot the score at 6-6. The Gophers counted it as a win and kept the Jug. The original Floyd of Rosedale, instated in 1935, was an actual prize pig wagered by the Minnesota and Iowa governors at the time. The Gophers won. A slightly more inanimate Floyd was sculpted the next year and has remained the rivalryâÄôs prize ever since. Paul BunyanâÄôs Axe replaced the âÄúSlab of Bacon,âÄù the rivalryâÄôs original trophy that went missing, in 1948. Minnesota won the first game with the Axe as the prize. But in recent years, the Gophers havenâÄôt seen much of any of the trophies. As Brewster said, the games are hardly rivalries anymore. So Minnesota is on a mission to change that, and it starts this weekend with the Gophers trying to return the Jug to that empty case.