President Eric Kaler discussed failed efforts to rename buildings on campus, the legislative session and his final stretch as president. 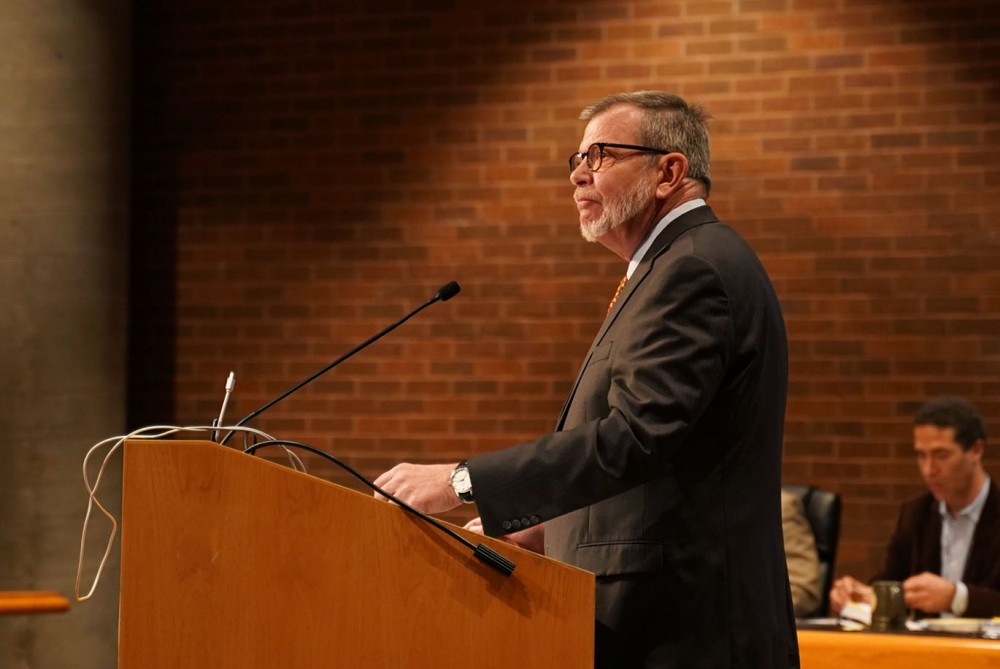 President Eric Kaler speaks during a meeting of the University Senate on Thursday, May 2 at Mondale Hall. The group discussed policy, budgeting and administrative matters.

University of Minnesota President Eric Kaler had his final conversation with Minnesota Daily before his presidential term comes to an end this July. Kaler discussed the Board of Regents’ decision not to rename Coffman Union and three other buildings on campus and reflected on his eight-year tenure.

Last Friday, regents voted to reject your recommendation to rename four buildings on campus. I’m curious about what you think about that decision?

Well, it’s absolutely the regents’ right and obligation to make that decision. I think the faculty did a terrific job in bringing forward recommendations. History is always open-ended, so some of the regents had questions about the roles of others. Questioning is a part of the academic world.

When you think about your role in this discussion … do you think there’s anything you could have done differently to move renaming along?

You know, hindsight is 20-20, and it’s always possible to discuss things in more detail, to lay more groundwork, to have a longer process. I think we balanced the need to get a historical perspective with the community’s desire to move on this fairly quickly [and] my own desire to get some closure before my term was up.

At the end of the day, we had a process that was not unreasonable, but clearly one could have done something differently, and I don’t know if that would have led to a different outcome or not.

What are some of those things that you would have liked to do differently?

Some faculty have expressed that they would have liked to see you take a more active role in defending the task force and defending faculty work. Where did you see yourself in that conversation? Do you think that you did an adequate job in that regard?

Well, I think the important thing is to keep your eye on the ultimate goal. And the ultimate goal after the initial regents’ discussion was to move forward in a way that had regents endorsing the work of the faculty. The way to do that is to work quietly, not necessarily behind the scenes, but in a way that produces unity and a common view. And excited rhetoric isn’t going to be helpful in that case. Again, I think we got the outcome that we needed to get.

Regents talked a lot and the community talked a lot, not just about renaming, but reckoning with the University’s history of segregation, of discrimination, of surveillance of students. Do you think that the University has come to a point with reckoning or is there still more to do?

I think there is still more to that journey. One of the outcomes that the regents asked for is for us to put together a process to … recognize the history of those individuals and to think more broadly about how we move forward together. I think that is a conversation that will be had at the University … it’s being had at many places around the country.

One of the things that was in the first task force report was the idea of a committee permanently charged with looking at history and looking at building names. Going forward, is that something that will happen under your tenure?

My hope is to be able to get that done. Yes.

It will be a group of faculty and community members and students who will look at these issues, engage with historical experts as appropriate and make recommendations as they find them.

The expectation is that committee will be convened before you leave in July?

Well again, that’s my hope. There are conversations to be had and alignment with the regents to be achieved. All I can say, for the third time, is it’s my hope to get that done.

Entering your final stretch as president, how does it feel?

It’s mixed, actually. A little bit of melancholy — much of what is associated with my job I enjoy a great deal. And relief on having completed a good, long run and having had some success. And sadness because I really will miss some of this a great deal. Kind of a basket of mixed emotions.

As you think about your tenure as president, I’m curious about what you are most proud of?

I’m fortunate to be able to be proud of several things. I’m very proud of the fact that, with the help of the Legislature and governor, we were able to minimize tuition increases for Minnesota resident students at the lowest rate since the Eisenhower administration. So I’m proud of that.

I’m very proud of the progress on academic rankings and student success. Proud of our Driven campaign, now at $3.3 billion. I’ve been fortunate to work with a very talented team of people for eight years, and I think we’ve moved the ball forward for the institution.

When you think about your biggest challenges, what have those been?

I think we also were blessed with several challenges. Certainly modernizing our human participant research was an important challenge for us. I think we got through that.

The misconduct of my athletic director was a challenge to manage. Some of the issues around the football team’s boycott were challenging. We’ve had our share of challenges.

Is there anything that, if you could call a mulligan, that you would do over?

That’s something you referenced in your last State of the Campus?

You’re going to have some newfound free time after [you leave in] July. What are your plans to do with that free time?

Well, I don’t do well with free time. I’ve never had very much of it. I’ve always been very busy with teaching and research and leadership roles. So I plan to work with the [University] Foundation to finish the capital campaign. I’m going to start to amp up my research activities and look forward to return to teaching. We don’t have any plans for an around-the-world trip.

We’ll probably take a few days off, Karen and I, and then we’re back at making contributions to the University in a different way.

What is that transition back into a faculty role going to look like, and what’s it going to feel like?

I’m very excited. I chose this line of work 40 years ago because I loved teaching and I enjoyed doing research. And it’s really thrilling to go back and focus in the last part of my career on the two things that brought me to this line of work to begin with.

Do you have any idea of what courses you’ll be teaching? Can we expect to see you in Chemistry 1001?

My hope is to teach the introductory chemical engineering course for one semester and teach a graduate course in my specialty the other semester.

This interview has been lightly edited for grammar and clarity.