U hosts forum on media arrests during RNC 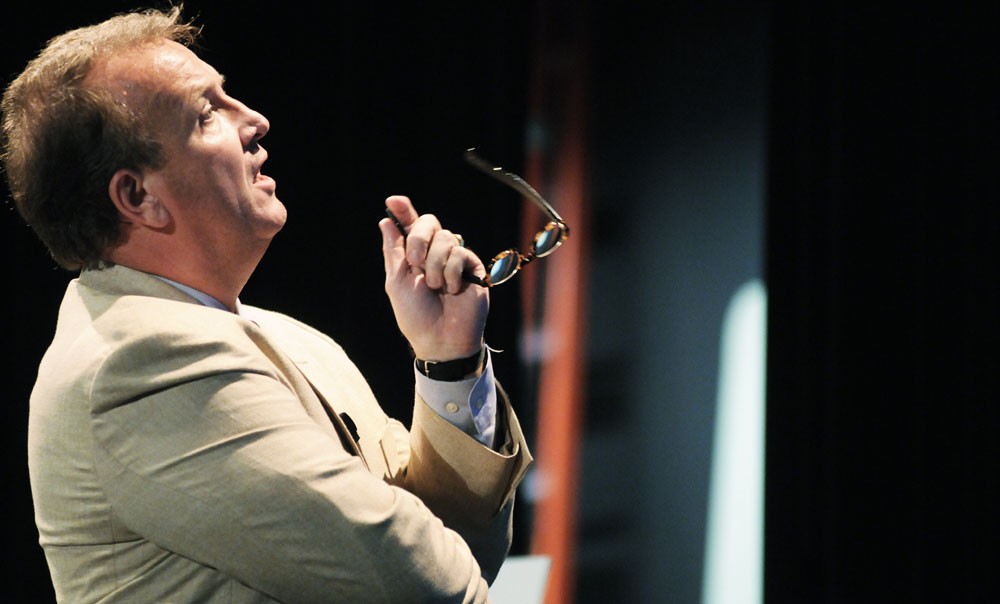 The Poynter Institute’s Al Tompkins moderates a forum about this month’s anti-RNC protests in Coffman Union Theater on Monday.

A forum Monday in the Coffman Union theater discussed the anti-RNC protests that occurred earlier this month, where journalists faced pepper spray, tear gas and arrest. Panelists included St. Paul Assistant Police Chief Matt Bostrom and St. Paul Deputy Mayor Anne Mulholland, as well as journalists from KARE-11 and the Pioneer Press, who covered the protests. Sarah Bauer, executive director of the Minnesota News Council, which helped organize the event along with the UniversityâÄôs School of Journalism and Mass Communication, said organizers were disconcerted that so many journalists âÄî as many as 46 âÄî were arrested. âÄúWe just wanted to make a contribution and have a discussion about why that happened,âÄù Bauer said. âÄúWhat was done well, but how we could improve the next time.âÄù Discussions revolved mainly around the mediaâÄôs right to cover protests without fear of arrest and definitions of precisely who, in the age of bloggers, is a journalist. Over the course of the protests, around 50 journalists were arrested, Pioneer Press reporter Mara Gottfried said. Bostrom said police had trouble designating credentialed mainstream media from bloggers and independent media. Audience members, including many members of independent media, criticized the double standard between how independent and mainstream media were treated. âÄúAll of us have a right to be on the street,âÄù Ed Felien , publisher of community newspaper Southside Pride, said. Nancy Brown of the Twin Cities Media Alliance and others who identified as members of the independent media also decried the complexity of the St. Paul Police DepartmentâÄôs policy of embedding journalists with riot police, likening it to a similar program in Iraq. Bostrom said police created the program to allow access to journalists âÄî even those from outside Minnesota. One of the forumâÄôs sponsoring organizations, the Minnesota Pro Chapter of the Society of Professional Journalists , repeatedly condemned journalistsâÄô arrests during the week of protests. Afterwards, the national chapter asked that St. Paul Mayor Chris Colem an drop charges against arrested journalists, which ranged from misdemeanor interference with a peace officer to felony conspiracy to riot. Coleman announced Friday that the misdemeanor charge of presence at an unlawful assembly would be dropped against people the St. Paul City AttorneyâÄôs Office identifies as journalists, St. Paul spokesman James Lockwood said earlier. The city currently has no idea how many journalists the decision will eventually affect, or when it will take effect, Mullholland said during the forum.