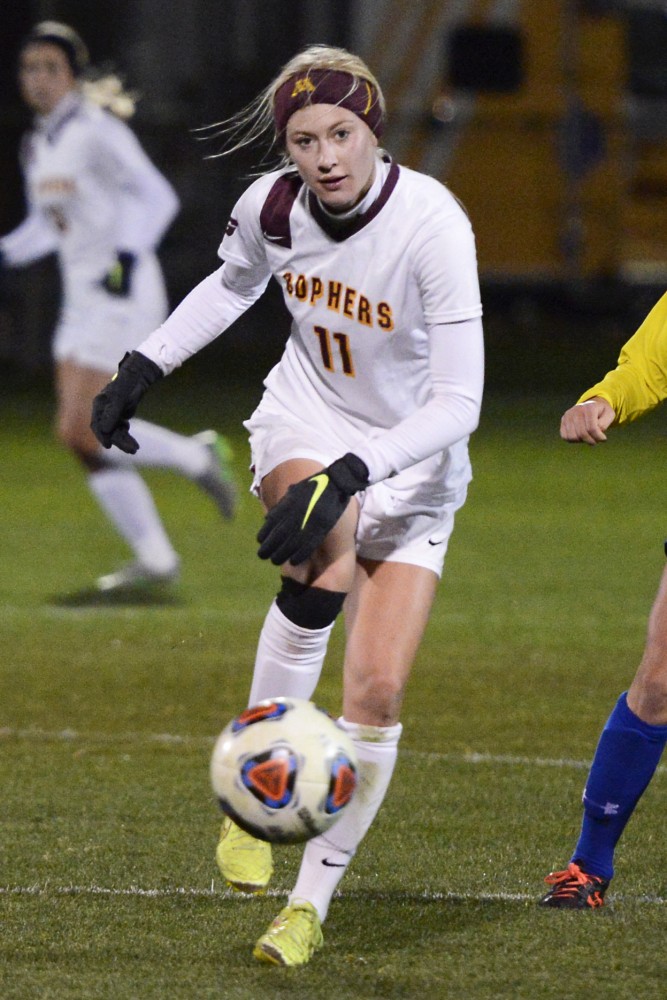 Gophers midfielder Josee Stiever kicks the ball downfield at Elizabeth Lyle Robbie Stadium where Minnesota hosted the first round of the NCAA tournament against South Dakota State on Friday night.

Minnesota went into last weekend undefeated, and its offense was in high power Friday, but Sunday the Gophers had their first defeat of the season.

The team shut out Villanova 5-0 Friday, but failed to score any goals in a 1-0 loss to No. 7 Duke Sunday in Durham, North Carolina. The loss snapped a five-game winning streak for the No. 9 Gophers.

“[Duke is] an excellent team. We’re really pleased with the way we went toe-to-toe with them,” head coach Stefanie Golan said. “This is a great experience, so it’s going to serve us well moving forward.”

Minnesota, 5-1, started Sunday’s game strongly and held Duke’s defense off well into the first half.

Freshman Ella Stevens put Duke, 5-1-1, on the board 31 minutes into the game for the Blue Devils to go up 1-0. The goal was the first that Minnesota had allowed in 435 minutes.

The Gophers out-shot the Blue Devils in the second half 7-1 and outshot Duke on the match 12-9, but Minnesota could not finish to even the score.

“We did a really good job of building the ball up the field through our defense to our midfield and up into the final third,” senior captain Simone Kolander said. “The last through ball or shot that wasn’t going on frame ended up plaguing us in the end.”

Gophers senior goalkeeper Tarah Hobbs also mentioned that Duke was a lot faster and more organized than previous teams Minnesota has faced, but she still managed to make three saves on the game.

Friday’s game had proven to go much smoother for Minnesota in a 5-0 victory over Villanova, 1-4.

Sophomore forward April Bockin scored twice to give Minnesota a two-goal lead in the first five minutes. With the two goals, Bockin tied her total goal tally from her freshman season, just six games into her sophomore campaign. Kolander set up both goals for Bockin.

Junior forward and defender Julianna Gernes added a third goal in the 40th minute to put the Gophers up over the Wildcats 3-0 at the half. Minnesota scored on three of their four shots in the first period.

Villanova continued to have trouble stopping Minnesota’s attack in the second half as Kolander scored a header on a corner kick from junior forward and defender Kellie McGahn.

Senior captain Josee Stiever closed out scoring for Minnesota in the 71st minute of the game with a goal from sophomore defender Emily Peterson.

The Gophers took nine shots in the second half and scored on two of them.

Villanova found more chances to attack in the second half and took seven shots but couldn’t find the net against Minnesota.

Hobbs played the first half in goal while senior Mara Dougherty entered for the last 45 minutes. Hobbs earned the shutout for Minnesota and despite one loss under the Gophers’ belt; the team has still outscored its opponents 16-2 through six games.

“The defense plays beautifully,” Hobbs said. “It’s nice having four players or even 10 players in front of you that can all defend well.”