For the Dieters, sports are in the blood 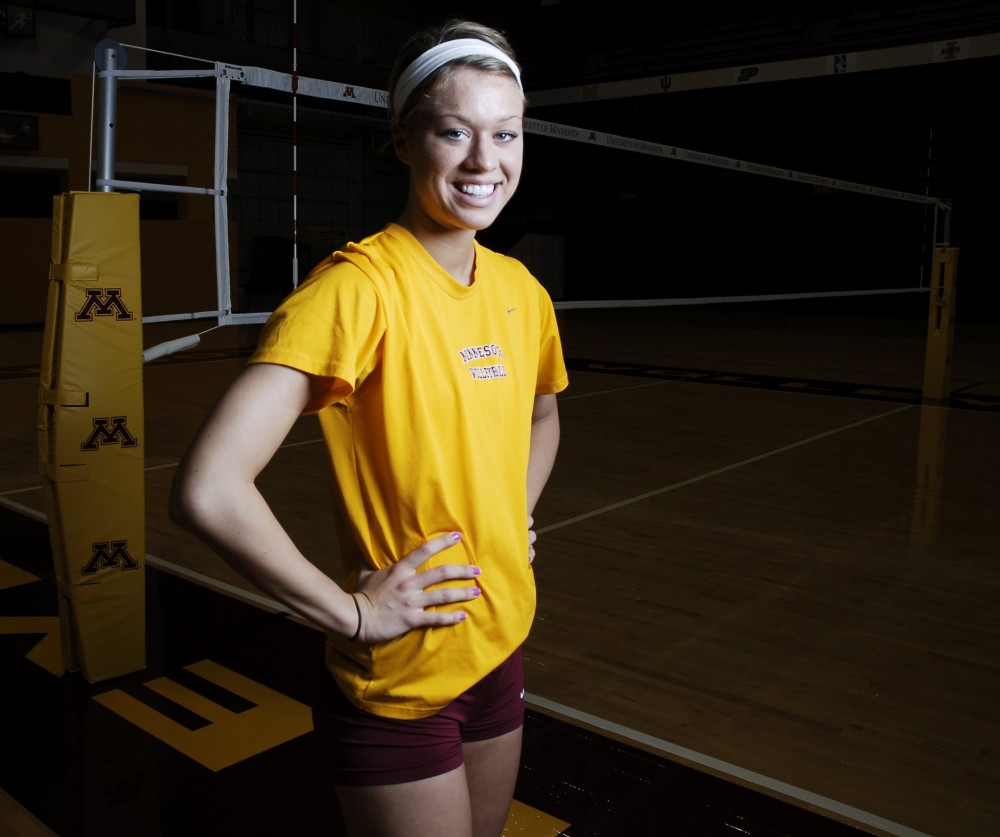 Sophomore Brook Dieter tried her hand at a lot of things as a child, but sports took hold of her and wouldn't let go. She joins both her parents and younger brother, in a long line of athletes to come out of the Dieter household.

It was almost expected. With a three-sport college athlete for a mom, and a two-sport, college-athlete dad, Minnesota volleyball sophomore Brook Dieter her brother, Mankato State hockey freshman Baylor Dieter, seemed destined to play Division I sports. Ray Dieter, Baylor and BrookâÄôs father, was a four-sport athlete and regular all-conference recipient at Tomahawk High School in Wisconsin. He also added two years of college football and baseball to his resume at Mt. Scenario College in Ladysmith Wisconsin. But after marrying Laurie Dieter and having two kids, he can only call himself the fourth-best athlete in the family. Laurie played three sports at Hibbing High School, and added four years of volleyball, basketball and softball at Minnesota-Duluth, earning the Female Athlete of the Year award during her senior year of college. And when two athletes of this caliber marry, anyone can assume that the children will, of course, be pushed headlong into the sports world. Wait a minute. When Ray and Laurie had kids, things were much different. âÄúBecause Laurie and I were so familiar with sports and active with sports, we made a pact that we wanted to expose our children to everything but sports,âÄù Ray said. So instead of being given a choice of two or three sports, Brook, now 19, and Baylor, currently 20, were immersed in opportunities to expand their horizons, as the two spent time in activities ranging from piano lessons to Kumon, a math tutoring program. âÄúMy parents wanted to make sure that we didnâÄôt think sports were the only thing in life,âÄù Brook said. âÄúI think it helped give us a different perspective on other things.âÄù But the siblings also immersed themselves in an active lifestyle revolving around the family. Living near Highland Park Reserve, the family spent plenty of time biking, camping, boating, playing catch, skating, and playing baseball âÄì something Ray said was so easy due to their similarity in age. âÄúBecause the kids are so close together, it was easier for us to involve them both in the same activities,âÄù he said. âÄúBaylor was a high-energy kid, so having Brook trying to keep up with BaylorâÄôs pace really helped Brook.âÄù The two naturally gravitated towards sports despite their parentsâÄô attempts to interest them in other areas, and Ray eventually said he and Laurie surrendered. So Brook took up club volleyball to go along with a dance class she had already been in, and eventually left the dance class due to time constraints, and focused solely on volleyball. âÄúI remember telling my ballet teacher that I chose volleyball over dance,âÄù Brook said. âÄúShe told me âÄòvolleyball wonâÄôt get you anywhere in life, and dance will.âÄôâÄù Brook is currently leading the Gophers with 3.6 kills per game and has been a factor in the blocking, digging and serving departments as well in both of her seasons at Minnesota. Like Brook, Baylor chose two activities as well âÄì hockey and baseball. And despite a busy schedule, played both through the end of his junior year of high school. âÄúA lot of guys that I know who are still playing quit baseball early on to focus on hockey,âÄù Baylor said. âÄúThe major thing was I loved both sports, and so despite the hectic schedule, we tried to make it work for as long as possible.âÄù After playing two seasons for Green Bay in the United States Hockey League, Baylor has joined Mankato State with four years of eligibility remaining, as the hockey season starts. And being used to a busy schedule, heâÄôs even fit in enough time to catch some of his sisterâÄôs matches so far this season. âÄúI made two games before I left for school, and then a few guys from my team and I watched her games on Big Ten Network and ESPN2 this week,âÄù he said. âÄúItâÄôs tough with our conflicting schedules, but we try to make each otherâÄôs games.âÄù With a pair of Division I athletes, the Dieter parents have certainly passed on their skills to their children, but with two kids to watch playing in the same state, how do Laurie and Ray handle the scheduling? âÄúWeâÄôve been blessed with some open weekends so weâÄôve been able to make both so far,âÄù Laurie said. âÄúWe figure from August through March theyâÄôll be doing something every weekend. And as long as theyâÄôre playing, weâÄôll be watching.âÄù And for Ray and Laurie, watching their kids play has yet to become tiring. âÄúMaybe if you werenâÄôt an athletic person, you wouldnâÄôt enjoy it as much,âÄù she said. âÄúBut I canâÄôt think of anything IâÄôd rather do on my weekends.âÄù