Research suggests a promising future for rooftop landscaping, despite the high cost. 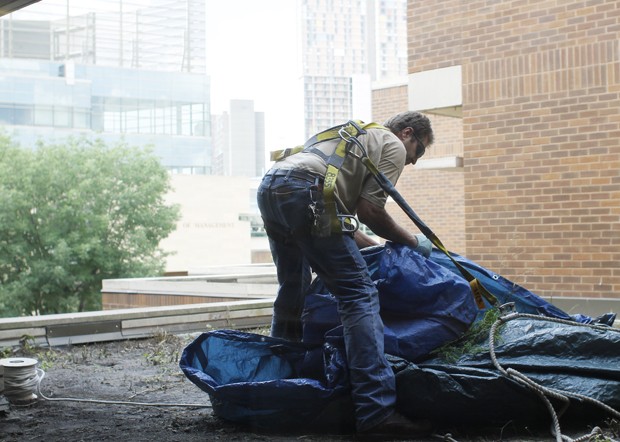 Walking past the blank concrete walls of Williamson Hall, it’s hard to imagine the roof was once a maze of diverse plant life.

After more than two years living atop a most unusual home, the array of grasses, bulbs and perennials has been removed as a long research project on green roofs is coming to a close.

The roof is empty and drab — at least for now. The question remains whether the University of Minnesota will eventually take the results of that research and turn the campus into a network of living roofs.

By selecting plants that serve specific purposes, green roofs can reduce energy costs. Plants that reflect light or absorb heat well help to cool the building during warmer months. In the winter, plants can insulate better than a traditional roof.

University graduate student and horticulturalist Jonathon Hensley set out in May 2008 to establish guidelines for a green roof that could thrive in Minnesota.

Hensley has spent the past two years experimenting on the roof with different plants, each separated in different containers to be monitored without interference.

While green roofs in general are nothing new, most guidelines for green roofs are based on milder climates. Such systems could not survive the cold and often dry Minnesota weather, he said.

The goal was to create a low-maintenance green roof that could “be used more as a technology than a recreational space,” he said.

Throughout the year, the roof absorbs precipitation to reduce fees the University must pay for storm water runoff.

The savings are hard to quantify, Hensley said, especially considering that a green roof can cost two to three times as much as a normal roof. But a properly installed green roof will last two or three times as long, so there is a trade off.

“Even though there is an initial upfront cost that is higher, as energy costs rise, green roofs become more and more cost-effective,” said John Erwin, a University professor of horticulture who worked with Hensley.

Even if the University chooses not to utilize Hensley and Erwin’s research, Erwin — who is also a commissioner of the Minneapolis Parks and Recreation Board — is sure the city as a whole will. He passed along a list of approved plants to the city to create a city-recommended green-roof guide.

“It’s going to be implemented pretty quickly,” he said.

Erwin pointed to the Target Center as evidence that green roofs can become a reality in Minneapolis.

The two-and-a-half-acre green roof atop the Target Center was finished in September at a price of $5.3 million. The roof will capture one million gallons of storm water each year, according to a statement.

Staff has not yet gathered information about energy or storm-water fee savings.

There are dozens of green spaces atop other University buildings, but nothing quite like the extensive green that once sat on Williamson Hall.

The roof of the Humphrey Institute of Public Affairs is home to several green terraces, but that may change in the future. University landscape architect Tom Ritzer said those green spaces are hard to maintain. The Humphrey terraces were not designed to be low-maintenance.

The apparent success of Hensley and Erwin’s research will be a part of Facilities Management conversations about the practicality of green roofs, Ritzer said.

But as the University struggles with funding and finances, the key to installing other green roofs is cost-effectiveness, Ritzer said.

“The cost is the big thing. That’s going to be the barrier,” he said. “If you could make it economical, then it’s more likely to be incorporated.”

Even if green roofs don’t become a staple of the campus, Hensley is sure one will become a permanent fixture on top of Williamson Hall.

“By this time next year, no longer will Williamson Hall be marked by this eyesore of a roof,” he said.