Both men and women beat Wisconsin at ‘Pack the Pool’ 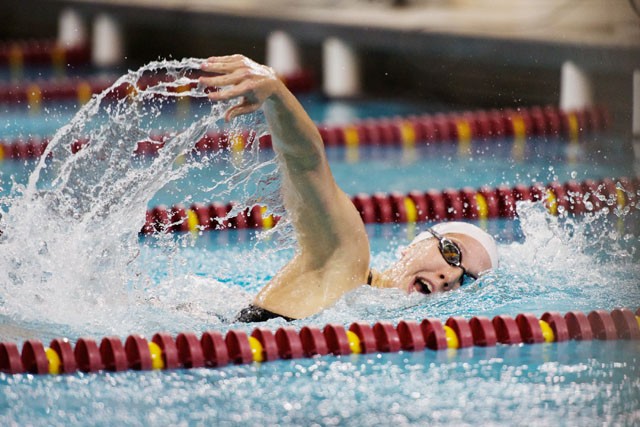 Both the menâÄôs and womenâÄôs swimming and diving teams notched wins against border-rival Wisconsin on Friday during the teamsâÄô Pack the Pool event at the UniversityâÄôs Aquatic Center. The women improved to 4-0, edging out the Badgers in a comeback victory, 152.5 to 146.5. Junior Ashley Steenvoorden sealed the win for the Gophers, picking up a first-place finish in the 500-yard freestyle, with her twin sister Kristen taking second. The sisters picked up three individual titles for Minnesota, while senior Jillian Tyler picked up two individual titles in the 100- and 200-meter breaststroke. Her 2:11.95 mark in the 200-meter breaststroke set a Minnesota-Wisconsin dual meet record. âÄúThis team can accomplish anything that they set their sights on,âÄù co-head coach Kelly Kremer said. âÄúTop to bottom, we are as deep as weâÄôve ever been.âÄù In its season opener, the menâÄôs team continued its dominance over border-rival Wisconsin, picking up a significant 174-123 victory over the Badgers. Taking nine of 16 events, the menâÄôs swimming and diving team extended its winning streak to 24 against the Badgers âÄî with three Gophers picking up victories in two events. Junior Matt Benecki was one of the three double champions, notching first-place finishes in both the 500 and 1,000 free events. Both teams have the week to gear up for their next challenge, hosting dual meets with both Iowa and North Carolina next weekend. âÄúWe are a deep conference, everyone seems to have a really strong team,âÄù Kremer said. âÄúThere isnâÄôt a large margin of error when you swim or dive in the Big Ten.âÄù