Minneapolis couple creates art that aligns with their core values

Kelzuki illustrations has something for all ages and species 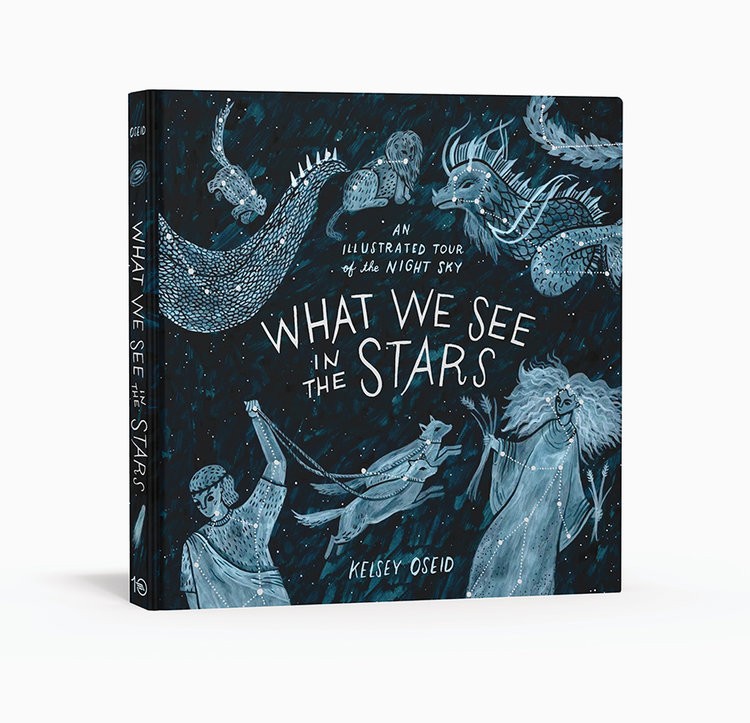 Minneapolisl based illustrator Kelsey Oseid's first book, "What We See in The Stars," gives the reader a tour of the night sky through illustration.

Kelsey Oseid, illustrator, co-owner and namesake of Kelzuki, has been painting and drawing for as long as she can remember. Her childhood was riddled with curiosity about the world around her — specifically, its inhabitants.

Decades later, she and her husband, Nick Wojciak, have created a company that forges their passions while advocating for their beliefs.

Oseid’s work revolves around her love of animals and astronomy, and the two often overlap. “I was raised on museums,” Oseid said. “When you’re a kid, that stuff is so magical.”

Wojciak, co-owner and director of operations, wears many hats for Kelzuki. From customer service to website production to book-keeping, he handles most of the behind-the-scenes work so Oseid can focus on her art.

Wojciak said top-selling prints include “Cetacea,” which features varying species of whales and porpoises and “Chondrichthyes,” a collection of sharks.

Each animal in a collection is painted in methodical pieces, Oseid said. The time for finishing projects can vary based on the available reference material and how complicated the color palette is.

While Google images does have its perks, Oseid said it is not nearly enough to work from. When working on foreign species or even prehistoric creatures, she turns to wildlife experts like U.K.-based zoologist Jules Howard.

Howard works with Kelzuki by ensuring that anatomy and taxonomy are accurately portrayed in the illustrations, Oseid said.

Despite its growing success, the husband-wife duo could never have predicted Kelzuki’s viability.

Oseid began selling her state bird prints in 2011, but it wasn’t until 2016 when she began posting a “species a day” on Instagram that her following sky-rocketed.

“It was a very savvy way to get an audience for our products,” Wojciak said.

In 2012, Oseid left her job at a publishing company to freelance. In 2015 she began illustrating full-time for Kelzuki.

It wasn’t until the beginning of 2017 that Wojciak left his corporate job to take over the business-aspects of their company.

“We decided to jump off that cliff together” he said. “And it worked out.”

As of now, Kelzuki paintings are available in select shops — such as the Bell Museum gift shop — around the Twin Cities. A large portion of sales comes from distributors overseas.

The prints have taken off in Australia, New Zealand and China, the couple said, which came as a shock to them both.

While the business is profitable enough to support them, they said it is most important for them to have a value-oriented company.

In addition, 10 percent of their earnings were donated to various non-profit organizations last year. This year they’re hoping for around 5 percent.

“This type of work is about accessing the nostalgia of being a kid,” Oseid said. She hopes to share this through her art.