Art pop-up in downtown skyways kicks off this month

“Goethe in the Skyways” seeks to connect German artists, Minneapolis artists and the community. 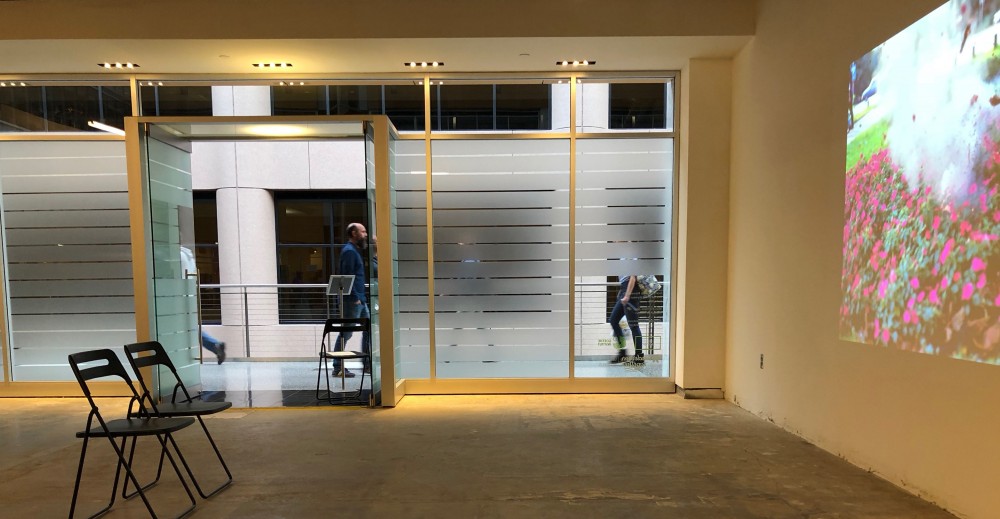 This month, it added yet another item to its impressive roster: a pop-up art gallery.

“Goethe in the Skyways” is a year-long program devoted to spreading German art and culture while inspiring community engagement.

Minneapolis was one of four U.S. cities chosen by the Goethe-Institut – Germany’s global nonprofit cultural association.

The project is part of the Year of German-American Friendship, which began Oct. 3.

Curator Sandra Teitge was chosen by Goethe’s Chicago branch to direct the Minneapolis pop-up. Though she is a native of Germany, Teitge has found a second home in Minneapolis, her husband’s hometown.

Teitge was given free reign to lead the pop-up in a direction separate from the Kansas City, Seattle and Houston exhibits. She chose its location – a barren space nestled between businesses in the City Center building skyways – purposefully.

“I’m interested more in reaching a public that’s not the conventional art public, but that goes beyond that,” she said over Skype from a Berlin cafe. “The skyways are a perfect location for that. The audience is a natural one that just frequents the skyways.”

Teitge will be in Germany until November. For now, “Goethe in the Skyways” is having a soft opening.

Artistic Producer Sarah Petersen and Production Assistant Daniel Shinbaum are holding things down in Minneapolis until her arrival.

When she’s not teaching at the Minneapolis College of Art and Design, Petersen is busy setting up the gallery. Though the current space is sparse, there are plans to include a ten-by-seven-foot mobile wall and a custom set of furniture.

In order to accommodate various artists and projects, every week the space will have a slightly different set-up.

“There’s this thing about pop-ups where the labor is supposed to be hidden. That’s the logic of a pop-up, like, ‘It’s suddenly there! It took nothing!’,” Petersen said. “With the bureaucracies of a large office building in Downtown Minneapolis, we wanted to acknowledge that things take time.”

At this stage, the purpose of the space has been somewhat unclear to visitors.

“This old couple – an old man and woman – came in, and I talked to them for a long time. They saw the projection on the wall and they were like, ‘So what are you selling?,’ which is just an interesting disconnect,” Shinbaum said. “People expect us to be a shop instead of a free art space, but we’re free. The institute is a nonprofit.”

The space will have a clearer mission after it has gone through another series of changes in November, when it will become the setting for an artist residency.

Teitge has invited Berlin-based artists to Minneapolis for two to four weeks, where they will spend time creating inside the gallery and exploring the Twin Cities.

Artist Franziska Pierwoss is the first artist to visit Minneapolis. As part of her residency, she’ll create a reality TV miniseries that will look at families during Thanksgiving dinner.

A mission of “Goethe in the Skyways” is to provide a public forum to reckon with the current political climate in the United States, examined in light of the 30th anniversary of the fall of the Berlin Wall.

Before the midterm elections this November, the gallery will also host local artists and The People’s Library (an MCAD student group) during “Pre-Election Poster Action,” a community printmaking initiative.

Looking forward, “Goethe in the Skyways” will host more events that aim to connect all members of the community.

It all starts in the skyway, which Teitge calls a “microcosm” in itself.

“You have the predominantly white office workers that frequent the skyways elevated and then on the actual street-level you have a lot of homeless people that are usually of color, and they don’t really have access to the skyways because there is very strict security,” she said.

Petersen also understands that the skyways represent more than meets the eye. She hopes “Goethe in the Skyways” will draw visitors from all walks of life.

What: “Goethe in the Skyways” Pop-up

Where: City Center, skyway level (next to Cardigan Donuts)