No. 1 Minnesota sweeps Bemidji State before a long road trip

The Gophers stay on top of the NCAA at Ridder Arena this weekend with scoring support from the Potomak sisters. 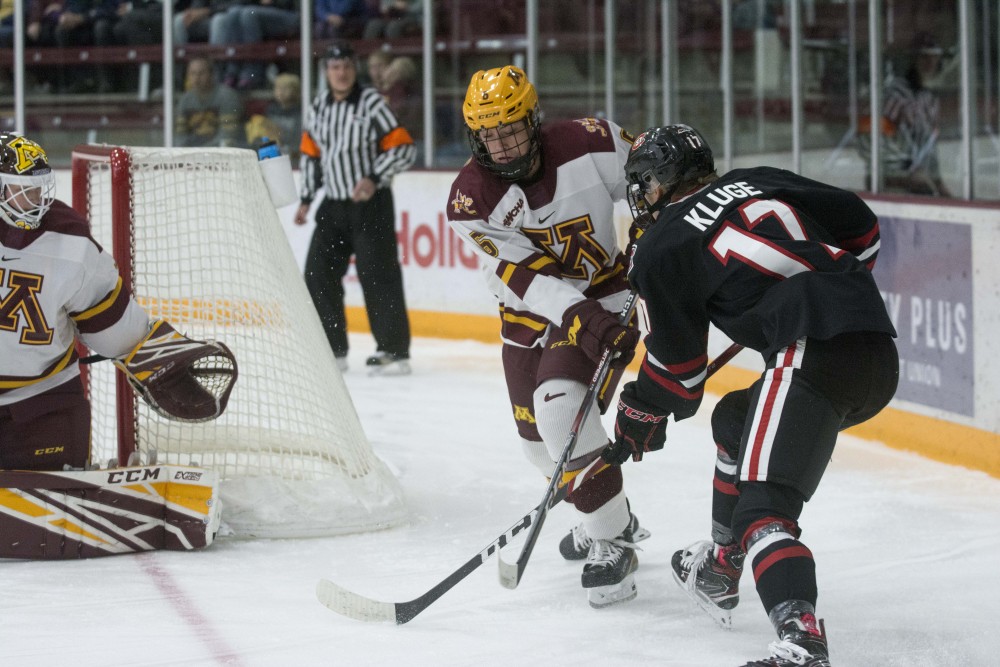 The top-ranked Minnesota Golden Gophers defeated the Bemidji State Beavers soundly this weekend at home by winning 7-1 on Friday and 3-0 on Saturday. The Gophers were coming off of a long ten-day break, and the rest definitely seemed to help.

Friday’s game started out with the Gophers appearing a tad rusty. The Beavers struck first right before the period was about to close with the first goal of the season from junior defenseman Mak Langei.

Yet, like most games where the Gophers start out slow, they rebounded in the second period. The period started out with redshirt senior forward Sarah Potomak scoring a shorthanded goal and then scoring again two minutes later to make the game 2-1.

“After the first period, we wanted to continue to play our game and manage it a little better,” head coach Brad Frost said. “The shorty by Sarah gave us some needed momentum.”

Less than two minutes later, another member of the Potomak clan added to the scoring onslaught, with redshirt sophomore Amy Potomak converting on a power-play opportunity. The Gophers scored two more goals in the second period, making the game quickly out of reach for the visiting Beavers.

During the third period, the Gophers did not let up on firing pucks past redshirt junior goaltender Lauren Bench of Bemidji State. The Gophers scored two more power-play goals in the second period. Senior forward Kippin Keller scored the last goal of the game and her first of the season, extending the lead to 7-1.

Saturday’s matchup proved to be a tighter contest, but the Gophers continued to dominate, proving they weren’t just one of the top teams in the country offensively, but defensively as well.

During the first period, the Gophers got off to a lead early and never let up, with Sarah Potomak scoring her third goal of the series. The Gophers defense only allowed two shots on goal throughout the period and that would be a theme for the game, making things easy for senior Gopher netminder Sydney Scobee.

During the second period, the Beavers had their best period in the series since the first period on Friday. The period was a deadlock between both teams and even though the Beavers had excellent defense, they couldn’t capitalize on offense and the score remained 1-0 going into the third.

The Gophers put the game out of reach during the third period, as Amy Potomak scored her second goal of the series less than two minutes into the final period. Sophomore forward Taylor Heise scored her second goal of the series, making the game 3-0. The score stayed put from there as the Gophers completed a two-game sweep of their in-state foe. Minnesota outshot the Beavers 42-15 during the game.

Up next, the Gophers travel north to face off against one of their bitter rivals in Minnesota-Duluth. The Gophers will not return to Ridder Arena until Jan. 4.

“I like the way we are battling recently. UMD is a really tough team, it’s a great rivalry and it should be a couple of good games,” Frost said.