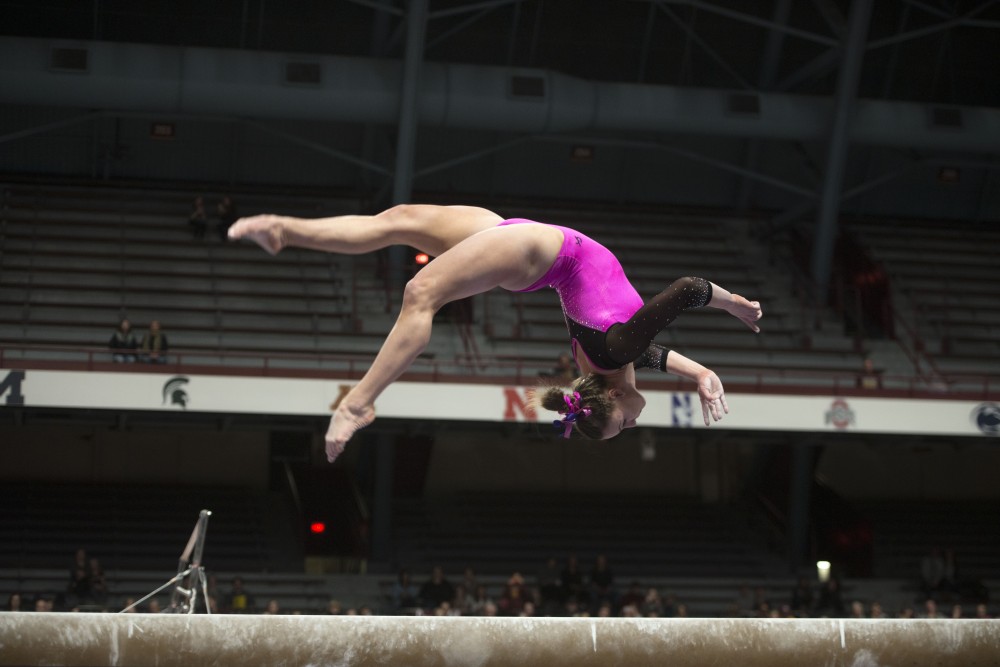 Both the men’s and women’s gymnastics teams were busy over spring break as the squads racked up conference accolades.

The No. 6-ranked men’s team hit the mats on Saturday, March 23 at Maturi Pavillion for the final time this season, taking on No. 8 Iowa and No. 5 Penn State. The Gophers needed to win the meet and have Michigan lose to Nebraska to grab a share of the inaugural Big Ten Regular Season Championship.

Minnesota took care of its piece. The team posted a season-high score of 410.950, beating the Hawkeyes and the Nittany Lions.

Top-ranked sophomore Shane Wiskus continued his dominance of the all-around with a first-place finish, claiming the floor exercise title and adding second-place finishes on parallel bars and high bars.

“We got to send off our seniors in style,” Head coach Mike Burns told Gopher Sports. “I’m really happy for those guys because it’s a memory that they’ll have for the rest of their lives.”

The win was the first domino to fall, with the Gophers’ fate resting in Nebraska’s hands. The Huskers delivered, posting their season-high score to beat the Wolverines 408.700-403.800.

The result meant a share of the first Big Ten regular season title.

“First [championship] we’ve had since I’ve been coaching here, and it’s a pretty special day,” Burns told Gopher Sports. “I couldn’t be prouder of these guys. The first half of the meet was decent, and the last half, they just exploded with some amazing performances.”

The men now shift their focus to the Big Ten Championships on April 5-6.

Meanwhile, the women traveled to Pennsylvania for the Big Ten Championships on Saturday, March 23.

The team finished fourth overall behind Michigan, Illinois and Nebraska after a disappointing fall on the beam dropped Minnesota’s score.

“[Saturday] wasn’t what we had hoped, but there were a lot of positives,” Big Ten Head Coach of the Year Jenny Hansen told Gopher Sports. “Our team has a lot of fight in them, and I believe they will respond and come out of tonight even stronger.”

Lexy Ramler, who was named Big Ten Gymnast of the Year, lived up to her award posting a 9.925 on beam, becoming the Big Ten beam champion. Ramler also grabbed a share of the Big Ten all-around title with two other competitors and was named to the Big Ten All-Championships team.

Ivy Lu and Paige Williams secured spots on the Big Ten All-Championships team as well. Williams finished second on the floor exercise with a 9.925. Lu placed second on uneven bars with a 9.950. Lu’s performance propelled the team’s uneven bars score into the top five in program history.

The women’s team will regroup and prepare for NCAA Regionals on April 6. The team will learn where they are headed and who they will play on March 25.