A mixture of bangin’, high-fallutin’ and pop hip-hop made a dreary day in Shakopee worth the muddy extremities. 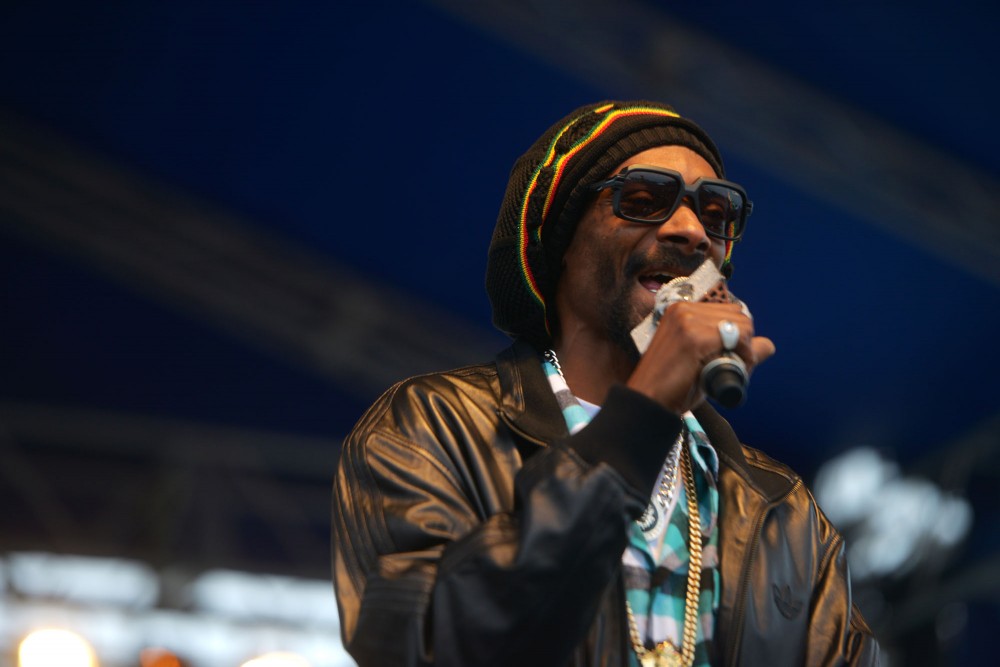 Snoop Dogg performs live at Soundset on Sunday, May 26, 2013, at Canterbury Park.

Busta Rhymes was slated to headline Soundset on Sunday, but he never showed up; whispers in the wind indicated that he was, for whatever reason, in Las Vegas.

That meant that 4:30 p.m. came and instead of that husky-voiced, square-jawed titan, Minneapolis’ own Prof took the helm, playing an impromptu 45 minutes that saw him stop the set to chastise a section of the crowd for fighting and sing a blues track that he’s been working on — seriously.

It’s unfortunate that Rhymes’ absence resulted in Prof performing, not because Prof was crap, but because of the brevity of the sets during the sixth annual festival.  It felt as though those minutes could have been spread to the other artists, who sometimes left the stage just as they seemed to really get going, as was the case with Aesop Rock and P.O.S.

Before any Rhymesayers hit the stage though, the crowd was stagnant, even being called the “walking dead” by 12:30 p.m. performer R.A. the Rugged Man.

The masses fittingly came to life when the aforementioned Aesop Rock performed at 2 p.m.  (But then, Rhymesayers are the Twin Cities’ babies and are often thrown the affection that comes with it.)

He was the catalyst, charging the crowd until bursting into “None Shall Pass,” its synthy pop undercurrent getting all manner of fitted cap-wearing men and Daisy Dukes-clad women dancing in a manner befitting such a large event — and, as P.O.S. said less than 15 minutes later, it’s the best way to stay warm on what was a chilly, windy day for 23,000 people in Shakopee, Minn.

Mother Nature did seem to agree to a tenuous nine hour cease-fire, only sporadically spitting a few drops at one patron or another.  The wind in particular did alter the stereotypical festival air, as, multiple times, event staffers and audience members attempted to get beach balls out into the crowd, only to have them instantly blown behind the main stage.

Aesop Rock served the crowd to P.O.S. on a platter, and boy did P.O.S. take advantage.  He was joined by the only live instrumentation of the day, performing with Marijuana Deathsquads, which added necessary punk intensity.

The crowd knew this was a triumphant comeback moment for P.O.S., as he spent much of the last six months in wait of a kidney transplant and only recently decided to step back on stage.  P.O.S. said that it was the most fun he’s had since his last time at Soundset.

Despite the anger and intensity that seems a natural byproduct of hip-hop, “An eye for an eye makes the whole world blind” could have been the theme of this year’s festival, with host Sway Calloway (MTV News, anyone?), consistently celebrating the community roots of hip-hop.

That, and maybe “titties,” as Joey Bada$$, Juicy J and Tech N9ne all spent a good part of their sets hitting on the crowd.

“Damn girl,” “Where the best strip club at,” and “White girls dancin’ for me like I’m Atmosphere and [expletive]” are a few illuminating moments of what passed for witty banter.

Things went smoothly, but there were certainly a few hiccups. The Busta Rhymes no-show was a big one. The overworked ground crew had to battle with woodchips to prevent Canterbury from turning into a mud pit; the network that supported the ATMs and credit terminals went on the fritz for two hours in the middle of the day, and lines for cash reached epic proportions.

The day culminated with the choreographed entrance of Snoop Dogg.  Barely on time, he and his posse rolled up to the back of the stage in two black Mercedes-Benz vans  as security cordoned off 20 feet on either side, pushing aside artists and press alike.

When Dogg’s costumed mascot came on and “Gin and Juice” filled the air, it was easy to imagine some housewife in nearby Savage, Minn., catching whiffs of cannabis and bass in the air.

When all was said and done, what was left was the detritus of 10 hours of drinking, smoking and dancing — and a clear picture of the fundamental differences between Minnesota acts and the national awning under which they huddle.