The four sets of candidates talked about their current associations with administrators. 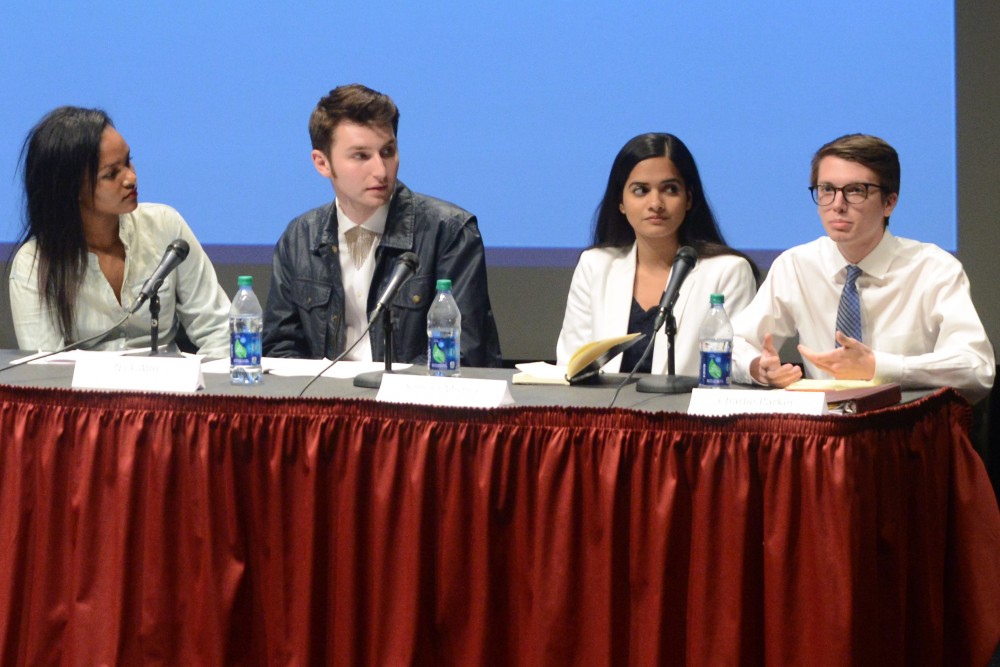 Four sets of candidates took the stage Wednesday night for a debate ahead of undergraduate student government elections next week.

About 100 students attended the Minnesota Student Association presidential election debate at Coffman Memorial Union. About half the questions were posed by the All Campus Elections Commission and about half came from students on Twitter.

The candidates talked about their current associations with administrators and how they would bring those relationships to their roles if elected.

His running mate, Makda Biniam, emphasized reaching out to administrators who are willing to work with them.

“There is a difference between having a conversation and having a relationship with administrators. It is important they know who you are,” said presidential candidate Trish Palermo.

Simran Mishra, who is running as vice president with presidential candidate Charlie Parker, mentioned the importance of students holding MSA accountable as well.

“Too often dialogue centers around holding administration accountable, but it should also be about holding student government accountable,” she said.

Throughout the debate, candidates repeatedly brought up whether they or their peers had experience with MSA.

“Erik’s never been a part of MSA, [which] goes a long way in making sure we are as accessible to students as possible,” Palermo said of her vice presidential partner Erik Hillesheim.

Hillesheim said that his leadership experience as president of business fraternity Delta Sigma Pi-Alpha Epsilon would help him look over the committees within MSA if elected.

Matt Snow and Lauren Loeb — the only ticket with no internal MSA experience — said that affection for campus was more important than MSA experience. They also said they wanted to give athletics and Greek life more attention in MSA.

Campus climate was also an issue brought up during the debate in light of the recent events on campus, including anti-Semitic graffiti and posters.

“We deserve to be here as much as the person sitting next to us. We need to make sure everyone feels included and safe here,” Loeb said.

Addie Agboola, a sophomore Biology, Society and Environment major, said the debate changed her perspective of the candidates and said most came off strong.

“It was really interesting hearing the other candidates’ perspectives. This was the first time all of the candidates have been together in one place,” Parker, one of the presidential candidates, said.

Correction: A previous version of this article misattributed the last quote.