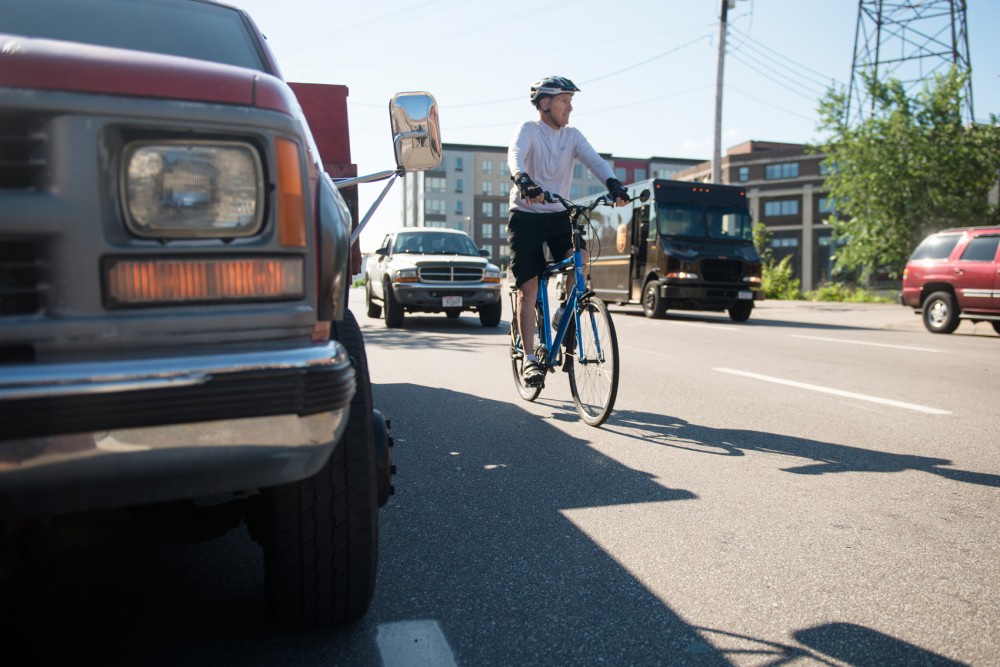 A biker moves into traffic to pass a vehicle illegally parked in the newly established bike lane on fourth street in Dinkytown on Tuesday, July 7. Though bikers now have a dedicated lane through Dinkytown, drivers continue to park within the lane illegally, causing safety issues with bikers who are forced to pass.

by Benjamin Farniok
When University of Minnesota biology, sociology and environment junior Shashank Holalkere pulled his bike out for the first time this summer, he was not expecting to find the new Dinkytown bike lane clogged with cars.
The lane was meant to create a safer environment for Minneapolis bicyclists. Now, city officials and local residents are expressing safety concerns over drivers illegally parking in bike lanes along the University-area stretch of Fourth Street Southeast in Dinkytown. City officials have added law enforcement to the area to
combat the issue, but some residents want to see a long-term solution.
Holalkere bikes along the lane to get to work most days of the week, but he said he doesn’t feel the street is as safe as it could be.
“It can be pretty treacherous,” he said.
The lane, which was installed in June on Fourth Street Southeast between 15th and 13th avenues Southeast, was meant to create a bike-friendly environment for bicyclists pedaling through Dinkytown, said Marcy-Holmes Neighborhood Association spokesman Chris Lautenschlager.
“When I’ve stood outside Varsity Bike and Transit while getting my bike fixed on a Saturday afternoon, I’ll see cars pulling into the bike lane and going to get coffee or run into Magus [Books] or Hideaway,” he said.
The safety issue has made it difficult to refer to Dinkytown as a secure biking area, one of the association’s main goals, Lautenschlager said.
During the lane’s planning stages, Lautenschlager said, he expected drivers would occasionally occupy the area. He said he’s surprised, however, at the extent of the issue.
Last week, the group took suggestions over Twitter for how to prevent parking on that stretch of the street. Some of the suggestions included increased enforcement or the creation of a protected bike lane, which would include a barricade between bikers and car traffic.
But the installation of a barrier is unlikely for the near future. The area is not currently part of the city’s bike strategy because of plans to install a nearby two-way protected lane along University Avenue Southeast, said city Bicycle Planner Simon Blenski.
Most likely, the area has seen a high volume of car traffic because the lane is new, he said. Before the lane’s creation, the street was open to drivers, making it hard for them to change their behavior.
Ward 3 City Council member Jacob Frey said the issue is common when these types of lanes are first defined, but he requested increased enforcement in the area last month to dissolve the problem.
“Old habits die hard,” Frey said. “It will take a bit of time for enforcement to trigger new behavior.”
Abdullahi Hussein parked his car in the lane and was caught by surprise when he saw it was marked off for bikes. Still, Hussein said he didn’t know where else to go to find parking.
“I was here a month ago, and there was parking,” he said. “I don’t know why they changed it.”
When the couple blocks of parking were taken away, the city added parking spaces along the University and 14th avenue Southeast bridges to make up for the change.
Noah Schuchman, deputy director of operations and business improvement for the city, said traffic control officials have made patrolling the area a priority.
Drivers are often getting into or approaching their cars by the time law enforcement can respond, he said, which stops officials from handing out tickets.
“We have found that we have written relatively few tickets for an area that gets a lot of our attention,” he said. “And there have been a fair amount of complaints.”
In addition to patrolling the area, the problem could be resolved by educating drivers about bike lane regulations, Schuchman said.
But a lack of funding makes it impossible to use educational materials like pamphlets, Blenski said.
Lautenschlager said he frequents the lane, and though there haven’t been any major accidents, he has been cut off by cars a few times while biking through the area.
Delete Image
Align Left
Align Center
Align Right
Align Left
Align Center
Delete Heading