The Gophers were outshot 22-5 in the second period, and they gave up two unanswered goals in that frame. 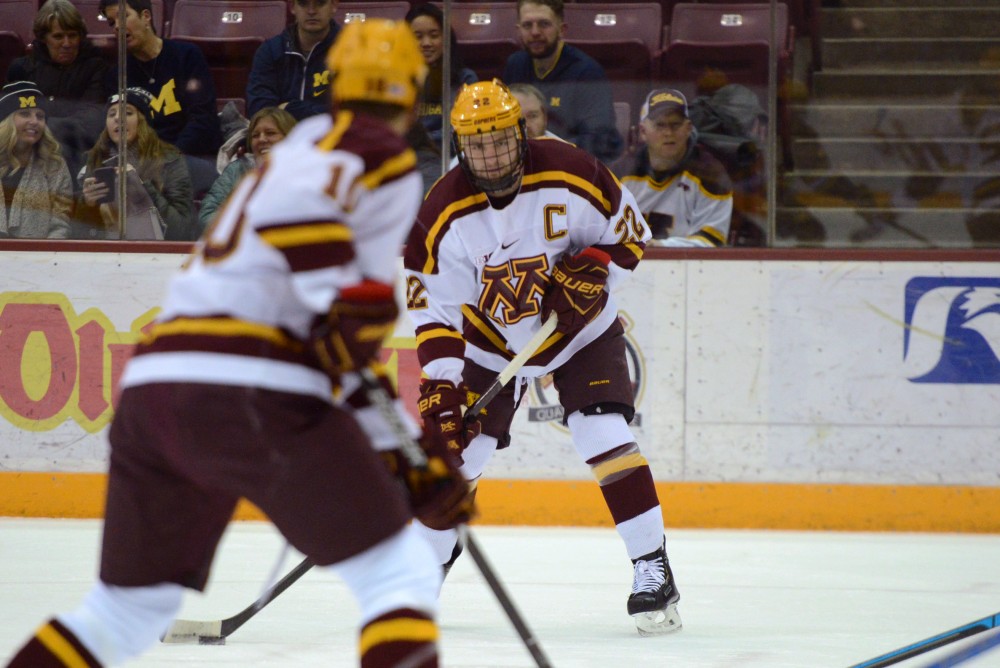 Senior Tyler Sheehy looks to pass the puck on Friday, Feb. 1 at 3M Arena at Mariucci.

Minnesota was tied with Michigan 1-1 going into the second period, then things fell apart.

Michigan pummeled Gophers goaltender Mat Robson with 19 shots, while Minnesota couldn’t get off a single one to start the second period. Finally, with just over 5:00 remaining in the period, Gophers freshman Sammy Walker shot and made contact with the goalie. But the damage had been done, and Michigan led 3-1 after two periods of play.

“I’ve been pretty positive all year, and I’m not real positive right now. That was not a good game for us,” said Gophers head coach Bob Motzko. “Sometimes you have to have good old fashioned knee bend.”

Minnesota gave up two goals while being outshot 22-5 in the second period. Though Brannon McManus responded with a goal in the third period, Michigan bit back with one of its own and Minnesota fell 4-2 in the first game of the weekend at 3M Arena at Mariucci on Friday.

McManus scored in the third period on the power play, responding from the second period’s two goals to make it 3-2. Then, later in the period, Jack Ramsey shot what would be the equalizer just an inch too high; the puck rang out with a ding and fell into the netting near the Gophers’ student section. Michigan’s Nicholas Boka scored with 3:24 left in the game, and Minnesota couldn’t respond from the two-goal deficit.

“That was a tough one to give up to get them to four because we put ourselves in a position at the end. We did have a push,” Motzko said.

Minnesota scored first with less than five minutes played in the game when Rem Pitlick scored on the power play. It was a one-timer slap shot from Tommy Novak for a 1-0 lead at 15:25 on the clock in the first period. Minnesota leads the Big Ten in power play and penalty kill this season. It scores on 26 percent of power plays and allows a goal on just over 15 percent of penalty kills. The Gophers have scored a power play goal in each of the last six games, and they were 2-7 on Friday. They haven’t scored a regular five-on-five goal in the past two games.

“Five-on-five, that’s important. It’s good that our special teams are working, but we need to be more effective 5-on-5,” Pitlick said.

Michigan answered at 12:46 left in the first with a rebound goal from forward Will Lockwood to make it 1-1.

“Obviously after the second we’re thinking we can still get back into it, so we’re trying to get some life back into our bench and keep going,” Novak said.

McManus made it interesting late in the game to bring Minnesota’s deficit to one goal when he scored on the power play with 7:26 left in regulation. Pitlick took a shot point blank in front of the Michigan goalie, and McManus was there for a back door rebound. Michigan scored a short-handed goal right as Pitlick got out of the penalty box at 3:24 left in the third to make it 4-2, Michigan leading. It was a wrap-around goal that snuck through blocker side on Robson.

Minnesota will play Michigan again on Saturday at 7 p.m. for the series finale at 3M Arena at Mariucci.

“I think we’ve shown that we can pretty much play with anyone and lose to anyone,” Novak said. “So I think our guys still have some hope in the locker room, and we’re looking to turn it around right now.”