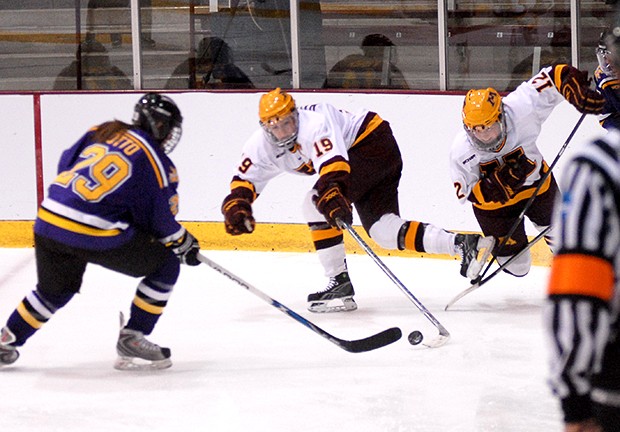 âÄúHit the refresh button againâÄù was a popular phrase for the Minnesota womenâÄôs hockey team in the minutes before the NCAA Frozen Four field was announced. The team gathered in the clubroom at Ridder Arena an hour after their loss to Wisconsin to see who they would face this weekend in the quarterfinal round. With three stacks of half-eaten pizzas on one table, the team was more focused on the bracket than refueling. At 4:58 p.m., many members of the team encouraged Eric Bakke, director of Hockey Operations, to keep refreshing the screen even though the brackets werenâÄôt scheduled to come out for two more minutes. Seniors Dagney Willey and Melanie Gagnon started to talk about the different formats that past tournaments have been announced in, including a conference call and a short press conference. This year the brackets were posted straight to the NCAAâÄôs website for teams to view on their own. That conversation didnâÄôt last long as both playersâÄô focus turned back to the screen. At 5:01 p.m., the brackets still werenâÄôt up, one minute late. This added some impatience to the room. When Bakke accidentally hit a link that brought the screen to the baseball page, collective taunts were aimed in his direction. Finally at 5:03 p.m., Minnesota learned that Boston College would be traveling to Minneapolis for the first round. Coach Brad Frost said this bracket was one of the better brackets he has seen in some time. âÄúLooking at [this yearâÄôs bracket] it holds some bracket integrity, avoids seeing our conference match-ups,âÄù he said. âÄúI think itâÄôs one of the better brackets IâÄôve seen in some time. I think the NCAA got it right.âÄù Last year, there was some unrest in the fact that two WCHA teams faced off in the quarterfinals when Wisconsin and Minnesota squared off. When Duluth lost to Wisconsin earlier this weekend, concerns of another WCHA quarterfinal match-up popped up. The first WCHA match-up would occur in the semifinals if Wisconsin and Duluth win their games. No.1 Wisconsin plays Dartmouth, and Duluth travels to No.4 New Hampshire in the top brackets. St. Lawrence plays No.3 Mercyhurst in the other part of MinnesotaâÄôs bracket, meaning MinnesotaâÄôs only chance of facing a conference opponent is in the championship game. Before the brackets were released, Frost said he didnâÄôt have a preference in MinnesotaâÄôs opponent. âÄúLast year, I think we were surprised to see that we were facing Wisconsin in the quarterfinals,âÄù he said. âÄúIt would be unfortunate to have two WCHA teams that have been in the top-four for pretty much the last few months face off against each other, but if thatâÄôs what the NCAA decides, thatâÄôs what they decide.âÄù As the players started to leave, first-year Monique Lamoureux was reminded that she owed everyone five dollars after she bet that Minnesota would have to play Duluth in the first round. She will just have to settle for Boston.