Katie Thyken was named team captain before the season and has stepped up. 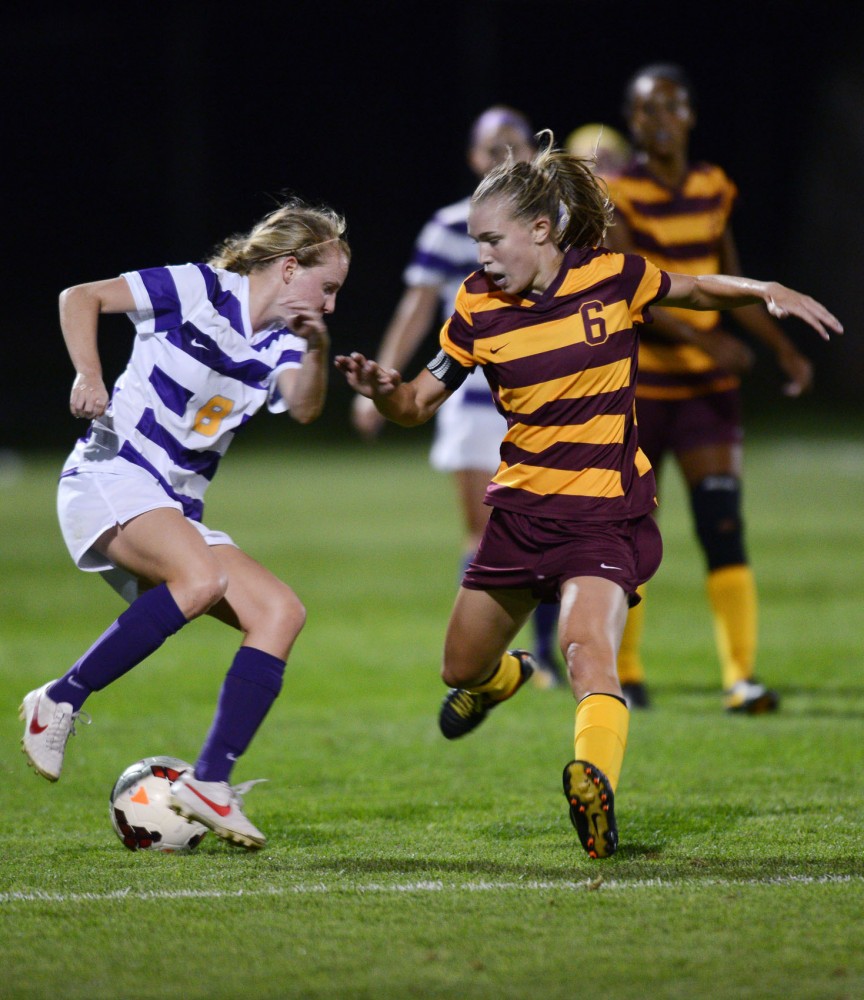 Minnesota midfielder Katie Thyken fights for the ball against Louisiana State on Sept. 6.

Junior midfielder Katie Thyken is a rock for the Gophers.

Steadfast and unwavering, Thyken holds her squad together. And for a Gophers team experiencing a season full of ups and downs as it maneuvers through the Big Ten schedule, Thyken’s leadership has been necessary.

“She’s our glue,” junior midfielder Olivia Schultz said. “Without her, our midfield would not be as strong as it is.”

In the spring, Thyken was named captain of a team that features just eight upperclassmen and a roster filled with turnover.

“I knew that I had to be a bigger leader on the field,” she said. “I knew I needed to make [my voice] even louder.”

Thyken said she picked up leadership skills from her father, who captained his collegiate hockey team.

“Growing up, you just get used to it and kind of develop into it,” she said.

Thyken said while she is probably the most vocal player in the attacking zone, she leads by example.

“I think that’s the most influential,” she said. “I always try to do that: work my hardest and maybe my teammates will work hard with me.”

Thyken is a fierce competitor. Her teammates notice her relentless style and bulldog mentality.

“She’s always the most aggressive — she’s everywhere on the field,” Schultz said. “She can run from one half of the field to the other and not even be tired.”

Thyken’s aggressiveness on the pitch isn’t something you’d expect from a 5-foot-4-inch player jockeying with larger Big Ten defenders.

But Thyken’s had experience battling more physically developed players from when she used to practice with her brother’s soccer team.

“You kind of have to learn to fend people off,” she said. “I just kind of learned to use my body.”

Now Thyken and the Gophers are battling another fearsome task: inconsistency.

Minnesota experienced upset wins over then-No. 7 Penn State and No. 13 Michigan but also lost to Michigan State and Northwestern, which are currently the bottom two teams in the Big Ten.

Despite the rises and falls, Thyken and the other seven upperclassmen are urging the team to stay the course, starting Thursday in Madison, Wis., against rival Wisconsin.