Three seniors bid adieu to The Barn with an 88-53 rout of the Hawkeyes. 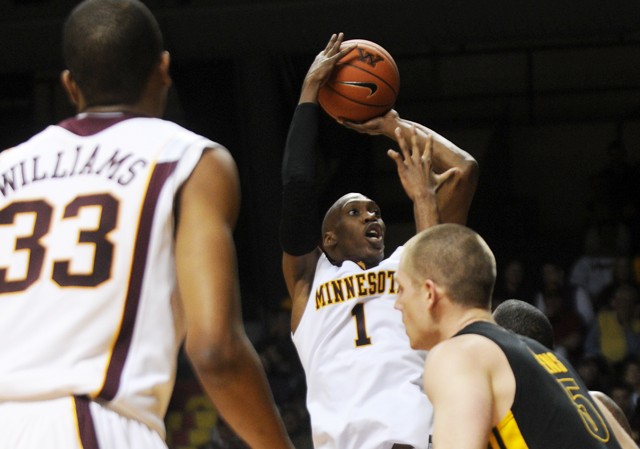 For one Sunday afternoon before the second season begins, the Gophers menâÄôs basketball team enjoyed a near-perfect script. All three Minnesota seniors had impressive showings in an 88-53 home rout of Iowa on Sunday that served as the GophersâÄô final tune-up before ThursdayâÄôs opening-round game in the Big Ten Tournament. Senior guard Lawrence Westbrook scored 20 points, senior forward Damian Johnson had his fourth career double-double and senior guard Devron Bostick tied his Big Ten season high with eight points in his first career start. âÄúGuys wanted to go out and finish the season the right way,âÄù said Johnson, who scored 10 points and had a career-high 11 assists. âÄúI think guys were real focused today, and we played with energy.âÄù The Gophers (18-12 overall, 9-9 Big Ten) must now pursue an NCAA tournament berth away from Williams Arena, where the Gophers were 14-3 this season. Needing four straight wins for a Big Ten championship and automatic bid to the Big Dance, sixth-seeded Minnesota will face last-place Penn State (11-19, 3-15) on Thursday night in Indianapolis. The winner advances to a Friday quarterfinal against third-seeded Michigan State. The Gophers won two games against the Nittany Lions by a combined seven points. They needed all of WestbrookâÄôs 29 points in a Dec. 29 win at Williams Arena and his buzzer-beating jumper to win at Penn State on Feb. 6. âÄú[WeâÄôll be] just playing free. We have nothing to lose,âÄù said Westbrook, whose 20-point game on Sunday was his third in seven games and the seventh in his career. Nothing seemed tentative about the GophersâÄô play on Sunday, as they led Iowa (10-21, 4-14) the entire game. MinnesotaâÄôs starters built a 16-8 lead in the first eight minutes, and bench players combined to score 17 straight points while holding Iowa without a field goal from the 10:56 to the 3:17 mark of the first half. The GophersâÄô lead stayed between 17 and 37 points the rest of the way. The comfortable lead allowed Minnesota to remove its seniors for individual ovations in the final minutes. Bostick came out immediately following his dunk off of JohnsonâÄôs final assist, and Westbrook and Johnson followed him to increasing applause from the sellout crowd. Gophers coach Tubby Smith said there was pressure for the team to play well on Senior Day, but the underclassmen did their part in the win. Sophomore guard Devoe Joseph scored 17 points and has scored at least nine points in six of the last seven games. Junior guard Blake Hoffarber and sophomore center Colton Iverson each scored nine points off the bench. The Gophers shot 58.5 percent and scored 21 points off of 14 Iowa turnovers. âÄúWhen youâÄôre making shots, everything seems to go smoother,âÄù Smith said. âÄúI thought that led to our excellent defensive effort.âÄù Smith needs two wins to reach 20 for the 17th consecutive season. He said itâÄôs a good time for the team to be playing well but added that his team must still prove it belongs in the tournament. âÄúItâÄôs a long ways; weâÄôve got to do a lot of work,âÄù Smith said. âÄúWeâÄôve got to play like we played today.âÄù