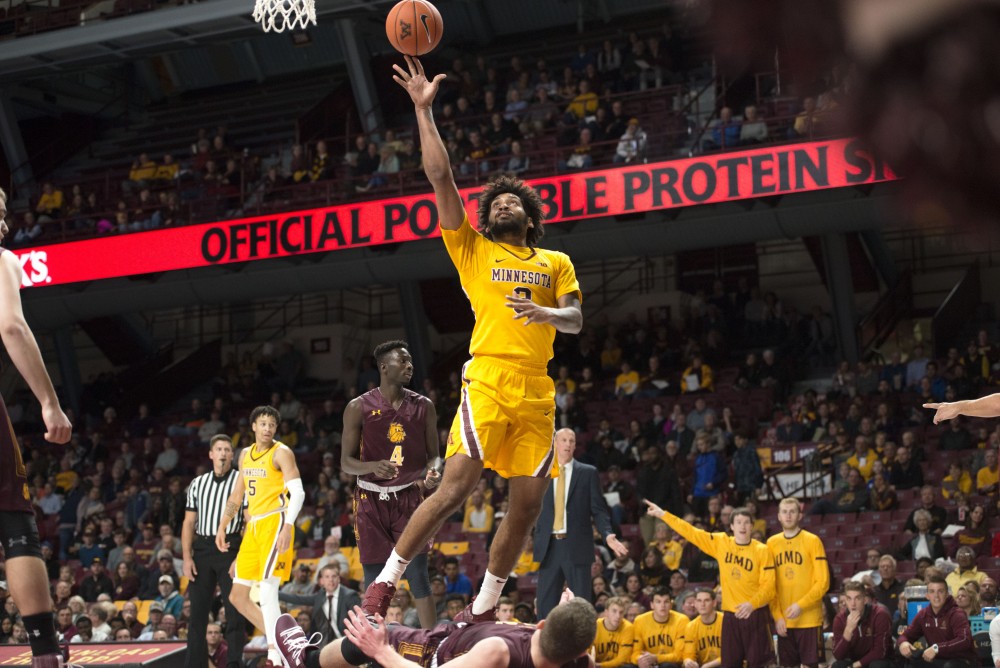 Kalscheur draining shots from downtown was a common sight on Monday night.

Minnesota rode the three-point shooting of Gabe Kalscheur and rebounding of Jordan Murphy to a 78-69 victory against Utah Monday.  It was a breakout game for Kalscheur, but the performance was not unexpected among his teammates.

“I knew that the day that he got here,”  said junior Amir Coffey.  “The way he carries himself in practice and in workouts.  I’ve known him since high school so I’ve always known that about him.”

Head coach Richard Pitino said he scheduled Utah to give the  fans an opportunity to see a game against a quality opponent at home early in the season.  On Monday night, a lively crowd of 11,554 showed out as the Gophers held off a competitive Utah team.

For Kalscheur, 15 of his team-leading 19 points came from behind the arc.  Doing so, he proved he is capable of competing against power-conference competition.

“Gabe Kalscheur’s not even a little bit of a surprise,” Pitino said. “He’s just got a pro mentality, so every time he shoots, nobody’s surprised when it goes in.”

Equally unsurprising was Murphy’s dominant play.  He paired his 17 rebounds with 11 points to notch his second double-double in as many games, dishing out five assists as well.  Those 17 rebounds accounted for half of the Gophers’ total of 34.

Minnesota navigated foul trouble for much of the night.  Murphy picked up his second personal foul seven minutes into the game.  Coffey, Daniel Oturu and Matz Stockman all picked up a pair of fouls before halftime as well.  However, no Gophers fouled out of the game as they were able to play tough without fouling down the stretch.

The team’s ability to keep their forwards in the game without fouling out was crucial for Minnesota, as Utah has three players listed at 7 feet tall on their roster.  The only Minnesota player with that size is Stockman, who played 10 minutes in relief of Oturu.  Depth at the center position is something Minnesota lacked in recent years, but the combination of Oturu and Stockman adds a new dimension to this year’s team.

“We haven’t been very deep at the center position for a while,” Murphy said, “Having that one-two punch with [Oturu] and [Stockman] is pretty special.”

Following the win, Minnesota will embark on a long stretch of away games.  The Gophers will not return to Williams Arena until December 5 when they play Nebraska.  Next week, they will play three games in Vancouver against Texas A&M, Santa Clara and Washington. Then they will play at Boston College in the ACC/Big Ten Challenge, have a neutral site game at U.S. Bank Stadium against Oklahoma State and open Big Ten play at Ohio State.

“It’s going to be mentally tough for us,” Murphy said. “We have some tough games ahead of us.  Hopefully we can keep our young guys engaged, keep [Kalscheur] going, keep Jarvis [Omersa] and [Oturu] going.  Our older guys will lead, I think we’ll be fine.”

While coach Pitino was pleased with the result, he maintained the team still has room to improve, specifically against zone defenses like the one Utah played on Monday.

“We prepared for it,” Pitino said.  “I thought it slowed us down a little bit in the first half.  I thought we did a decent job of attacking it.  We’ll see zone against Washington so we have to continue to work on it.”