In Stadium Village, new businesses are a gamble

Owners are risking losses in exchange for a leg up after construction finishes. 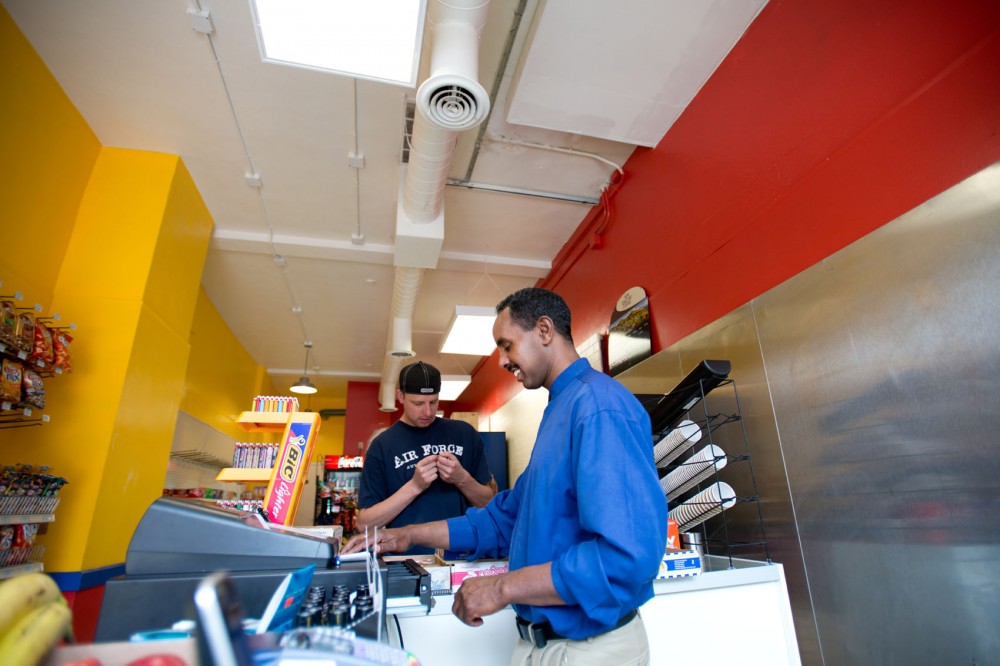 Ahmed Mohamed, owner of the newly opened U of M Market, rings up a customer in his store June 16.

Stadium Village businesses may be struggling amid light-rail construction, but business is booming for Smokedale Tobacco.

Owner Hatem Younis said the smoke shop — which opened after several delays this summer — will expand into an adjacent space later this month.

Like many new business owners in Stadium Village, Younis leveraged early losses for the promise of the light-rail line and new apartment buildings.

“What you see is people recognizing the potential and willing to maybe fight through a couple of difficult years,” said Business Resources Collaborative chair Chris Ferguson, who has been helping businesses along the Central Corridor prepare for construction and is working to attract customers to the area.

The expansion doesn’t mean it’s always been a smooth ride for Younis. When customers complained about not being able to find the store, for example, Smokedale had to run ads with maps explaining how to get around the construction.

Other businesses have not been able to adapt as well. Hot Diggity Dog was one of nine businesses to open during construction, but owners Andrew Jorgensen and Cody Swede were forced to close their hot dog restaurant after just six months.

It has not been any easier for the space’s latest tenant, the U of M Market. Owner Ahmed Mohamed said business has been slow for the small convenience store, but he’s still hopeful that traffic might pick up with the school year underway.

“A lot of customers have told us ‘Hey, you’re going to be OK when the students come back,’” Mohamed said.

Leo’s Burritos and Quiznos have also opened and closed since construction began along Washington Avenue. Building owner John Trautz said other restaurants are interested in the vacant storefronts, but no one has committed yet.

“It’s definitely slowing down the leasing process,” Trautz said. “It’s a war zone. It’s hard to get around down there.”

Trautz said businesses struggle with the decision to lease potentially profitable space ahead of the competition.

“It’s a chicken and egg problem,” he said. “Let’s say they waited until [construction] was done. They wouldn’t have all of those losses, but the space might not be available.”

According to Ferguson, who also owns the Stadium Village Dairy Queen and Orange Julius, business owners might find these vacancies to be more expensive than before.

Ferguson said he looked into renting the former spaces of Hot Diggity Dog and Quiznos, where rent was about $2,500 and $4,000, respectively. He said those rates were “on the high side” for the neighborhood and are more in line with retail spaces under the new apartment complexes Stadium Village Flats and the Edge on Oak.

Some businesses along other areas of the Central Corridor were able to negotiate rent reductions during construction, Ferguson said, though he didn’t know of any similar deals in Stadium Village.

Two businesses under the apartment complexes have timed their openings to coincide with the end of heavy construction in the next two weeks.

The Yogurt Lab is opening a location in the Edge on Oak  on Sept. 24, according to co-owner Andrea Switz. A new Dino’s location is also opening in Stadium Village Flats later in September. Owner Jason Adamidis said that the Greek restaurant could have opened earlier but delayed opening until construction was finished.

“This construction was hard for us in the short term, but it’s going to be to our advantage in the long run,” Younis said. “That area is going to be the center of the city in the next year.”