The president spoke at Northrop Sunday, marking the first time a Somali president has visited the state. 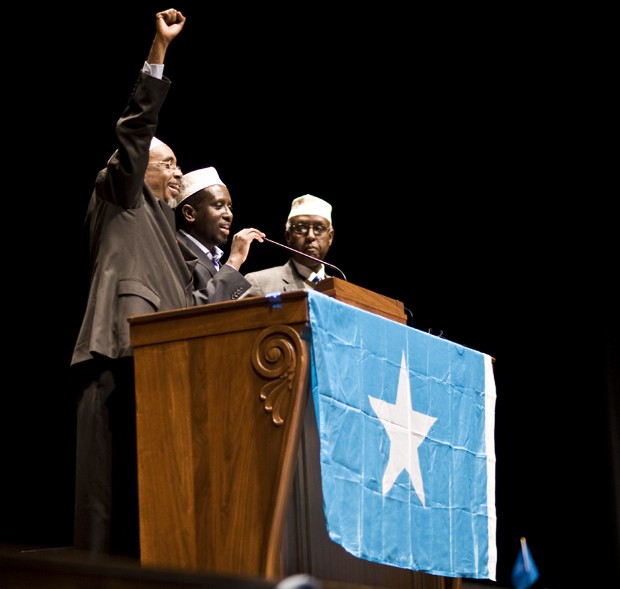 Thousands of Minnesota Somalis gathered Sunday in Northrop Auditorium for an address by newly elected Somali President Sheik Sharif Sheik Ahmed covering his countryâÄôs growing insecurity and the challenges his administration is facing. It was the first time a Somali president had ever visited Minnesota. Speaking in Somali, Ahmed said his government will try to negotiate with the Islamists who now control the majority of the country. âÄúBut if they donâÄôt work with us,âÄù Ahmed said, âÄúwe will destroy them.âÄù Ahmed, who was elected in January, expressed optimism and said his government will defeat its enemy. He also condemned the terrorist recruiting that had drawn at least 20 Minneapolis Somali men back to their home country to fight. Ahmed said it is unfortunate that al-Shabab, a group the U.S. government says has ties to al-Qaida, inherited brutal laws from foreign countries; the group beheads people who stand against its ideology and cuts the hands and feet off those who steal. The president was accompanied by delegates from Somalia, including his Foreign Minister Ahmed Ali and Deputy Prime Minister Sharif Hassan Sheikh Adan. U.S. Sen. Al Franken, D-Minn.; St. Paul Mayor Chris Coleman; and Speaker of the State House Margaret Anderson Kelliher also spoke Sunday and welcomed the president. Franken said he had a meeting with Ahmed and discussed Somali issues in his office in Washington, D.C. Franken said he understands the obstacles Ahmed is going through to stabilize his country and urged the warring sides to end the conflict. Before his presidency Two years ago, Ahmed was chairman of the Islamic Courts Union (ICU), which managed to provide SomaliaâÄôs most dangerous areas with six months of peace and stability âÄî the first peace the country had seen in years. Somalia has not had a stable government since 1991. During the six months, the ICU ran the country, and the leaders were divided into two groups: moderates and hardliners. Most view Ahmed as a âÄúmoderateâÄù Islamist. In December 2006, the Ethiopian-led forces that came into the country with the help of the former transitional federal government of Abdullahi Yusuf Ahmed overthrew the Islamists that Sheik Sharif Sheik Ahmed had led. Sheik Sharif Sheik Ahmed was then on the run from Ethiopian troops, which the United States supported in hopes of eradicating Islamists, fearing that Somalia would become a haven for terrorists. During this time, he worked with Hassan Dahir Aweys and militant leaders who are listed as terrorists by the U.S. Department of State. Sheik Sharif Sheik AhmedâÄôs former close friends and allies al-Shabab and Hizbul Islam are now fighting to bring down his government. During 2007 and 2008, he lived in the neighboring countries of Somalia as an exiled leader. Some protested the visit Even though many Somali-American leaders and college students had been preparing for the presidentâÄôs visit, others from the Somali community said they thought his visit was irrelevant for Minnesota Somalis. Minneapolis has the largest Somali population in the United States. Professor Ahmed Samatar, dean of the Institute of Global Citizenship at Macalester College, said Sheik Sharif Sheik AhmedâÄôs visit will not achieve anything substantial. âÄúHis government lacks the legitimacy to deliver anything, just like his predecessors,âÄù Samatar said. Since Sheik Sharif Sheik AhmedâÄôs administration was elected on a system without any democratic principles, he cannot serve the interest of Somalia, Samatar said. University of Minnesota alumnus Ahmed Jama said the presidentâÄôs visit will not do much for Minnesota Somalis or for his government. âÄúPeople waving flags will only go there to see him since they havenâÄôt seen a Somali president for decades,âÄù Jama said. âÄúOther than that, I donâÄôt think Somalis will attain [anything] from the tour.âÄù