Weekend Culture Compass – Cinco de Mayo and May Day, get your party hat on.

Not only are there tons of festies this weekend, but Flight of the Conchords and Leonard Cohen are in town. Also, art from those behind "Yo Gabba Gabba!" 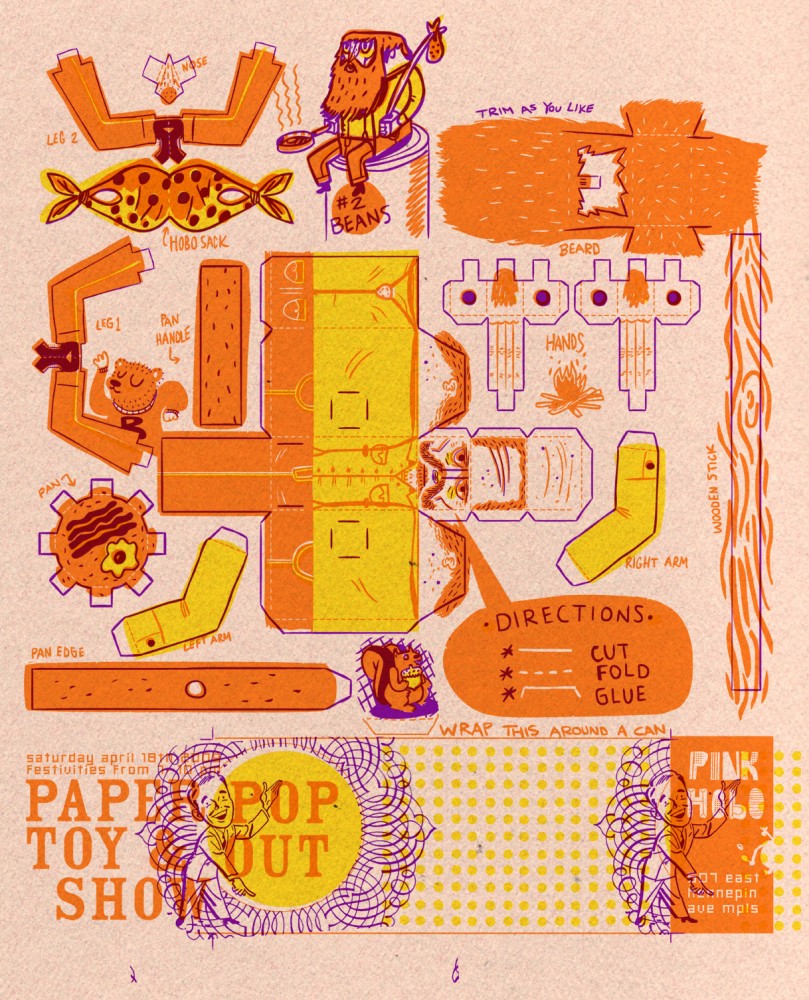 Source The Paper Toy and Pop-Out Show has kid-friendly art that does anything but waste paper." />

Source The Paper Toy and Pop-Out Show has kid-friendly art that does anything but waste paper.

Friday Art – Paper Toy and Pop-Out Show Have you ever seen “Yo Gabba Gabba!” on Nick Jr.? It’s the trippiest children’s show in a long time, with florescent monsters learning about sharing and not biting their friends, complete with techno trance-pop. Well, the gallery owners behind “Paper Toy and Pop-Out Show” are part of the animation company responsible for that tripfest 3-year-olds love, and if you stop by the Pink Hobo Geek Art Gallery perhaps your mind will be blown in a different, but still kid-friendly, way. All of the pieces included in the show have been made completely out of paper (and a couple other materials when absolutely necessary, like glue). Kind of like a super-advanced form of the papier-mÃ¢chÃ© you did when you were eight. Pink Hobo Geek Art Gallery, 507 E. Hennepin Ave Art âÄì The Nude in Minnesota There’s more nudity here than in an issue of Penthouse and more flesh on display than at the Vu. Okay, maybe not quite âÄ¦ The Nude in Minnesota features the work of several local photographers, all centered on one specific subject: the unclothed human form. All giggly curiosity aside (what are we, thirteen-year-old boys?), the photos run the gamut from the arty to the slightly pornographic. Gallery 332, 1500 Jackson St. NE Music âÄì Colin Hay Colin Hay came from a Land Down Under back in the ’80s as a member of Men at Work, who had a couple hit singles back in the era of our births. Men at Work didn’t last past 1985 (too much Vegemite?) and Hay struck out on his own, releasing a bunch of solo albums. Our generation might be more familiar with his melancholy solo work from “I Just Don’t Think I’ll Ever Get Over You,” which was featured in “Garden State.” In June he’ll reissue his album “Topanga” (probably not about the character from “Boy Meets World”) and is appearing at the Cedar Cultural Center to perform from his back catalog and new material from his forthcoming album, “American Sunshine.” The Cedar, 416 Cedar Ave. S 7 p.m. $22 – $25 Holiday âÄì Cinco de Mayo Festival Cince de Mayo is the holiday we Americans celebrate with our favorite quasi-Mexican emblems: Corona, tequila, enchiladas, sombreros. If something a little more accurate is what you’re seeking this weekend, then the District del Sol in St. Paul has your back. Their Cinco de Mayo Fiesta features salsa-tasting, a lowrider car show and a parade – to name a few highlights. Traditional Mexican music will be played later in the night for dancing. District del Sol St. Paul’s West Side – 176 Cesar Chavez St. Fri., May 1 from 4 p.m. – 9 p.m., Sat., May 2 from 9 a.m. – 6 p.m. Music – Ragamala Dance: Sthree The Southern Theater is putting on a ragamala dance, a traditional dance form that has been only slightly enhanced to modernize it for today’s audiences. This one, “Sthree,” tells a tale based on an epic story. The title was translated to “The Anklet,” and the tale is said to be about the relationship between karma and dharma. The score was composed by a legendary Indian violinist and features a vocalist to accompany the music. The choreography promises to be innovative, intriguing, and beautiful to behold. Southern Theater, 1420 Washington Ave S. 7:30 p.m. $29 Saturday Music âÄì Dan Deacon Dan Deacon’s “Bromst” is one of the best albums of the new year, full of bleeps, math rhythms even a few soul choruses. A good name for his genre would be “electric space candy.” Bonus: he’s rumored to be unforgettable live. Triple Rock Social Club, 629 Cedar Ave. All ages 5 p.m., 21+ 9 p.m. $10 Music âÄì Cloud Cult This year, Cloud Cult pulled a Sigur Ros and released an artistically notable DVD in theaters while getting ready for a nation-wide tour. But thatâÄôs just one of the many accomplishments in their history as a band, others being remaining independent despite major label offers and remaining staunchly eco-friendly. Their current sound is musically rich, with string instruments accompanying their self-described âÄúcatharticâÄù sound. TheyâÄôve also added painters to their line-up to please fans who like more than just boring old instruments during a live show. First Avenue, 701 First Ave. N. 6 p.m. $15 Art – âÄúRingtoneâÄù Ah! The internet is ruining human interaction as we know it. People are writing novels on Twitter and trying to date Lindsay Lohan on eHarmony. Madness! If that doesnâÄôt seem as bad as the medieval days of self-flagellation as a means of communication, âÄúRingtoneâÄù might change your mind. A sparse play with only a few actors, it tells of individualsâÄô attempt to connect inside an art gallery amidst the birdsongs of constant ringtones. Rogue Buddha Art Gallery, 357 13th Ave. N.E. 8 p.m. Tickets $5 – $10, space limited call 612-886-2868 Comedy âÄì Lizz Winstead